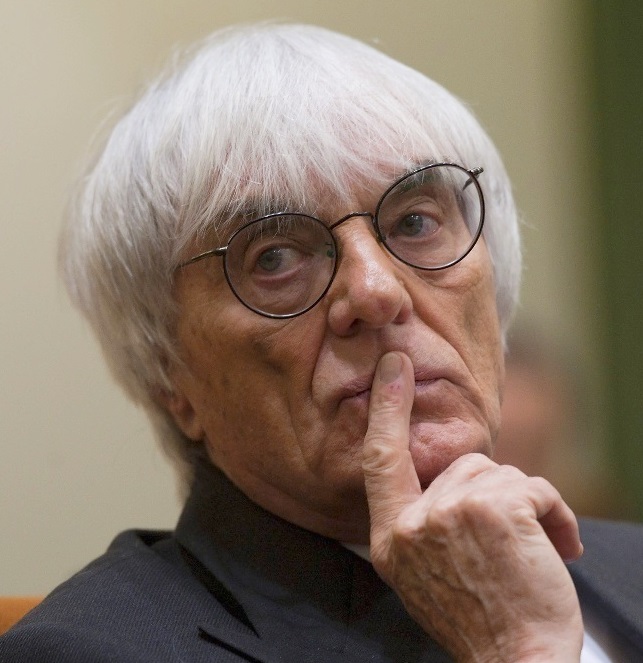 According to F1 business journalist Christian Sylt in the Telegraph, court papers in Munich show that, since the F1 chief executive divorced from his wife Slavica, she has paid him an incredible $100 million per year.

"The duration of the payments from the divorce decree is not known," the indictment confirmed.

Apart from demonstrating the 83-year-old's incredible wealth and income, the news could tie in with other reports of a 'secret' deal with the British tax office.

Ecclestone has claimed that he paid the alleged $44 million bribe to jailed Gerhard Gribkowsky not to affect the sale of the sport, but to stop the ex-banker from revealing details about his tax affairs to British authorities.

Ecclestone told the Times: "It feels as though the vultures are circling. The trouble is that vultures are usually around for dead people and I am very much alive."

He insists there is nothing sinister about his British tax affairs.

"I could control the business from anywhere I like," said Ecclestone. "I could go to Monaco or Switzerland and still run F1 quite happily. I don't."

Taxman 'did sweetheart deal' with Formula One chief
Bernie Ecclestone is accused today of avoiding a potential Â£1billion-plus tax bill after the UK tax authorities scrapped an inquiry in return for just Â£10million.

But the secret deal could now be overturned – and Formula One supremo Mr. Ecclestone, 83, could again face a colossal tax bill – thanks to associated claims that his ex-wife Slavica mysteriously pays him Â£60million a year.

Her Majesty's Revenue and Customs last night refused to discuss the allegation that it spent nine years probing the tycoon's affairs and links with offshore family trusts before quietly reaching an agreement.

But the case focuses a fresh spotlight on complaints that the taxman is all too ready to agree 'sweetheart deals' with the super-rich and big businesses.

Mr. Ecclestone refused to answer detailed questions about his tax affairs but insisted that he had always paid his fair share and denied any wrongdoing.

His potential tax bill hinges on offshore family trusts established by Mr. Ecclestone in 1996, when he handed over ownership of his Formula One holdings.

His potential tax bill hinges on offshore family trusts established by Mr. Ecclestone in 1996, when he handed over ownership of his Formula One holdings.

Mr. Ecclestone refused to answer detailed questions about the trusts. He did, however, deny any wrongdoing, saying he personally stumped up almost Â£52million in tax last year, and had always paid his fair share.

Mr. Ecclestone said: 'Other Britons with my wealth and means have chosen to live abroad to avoid paying British taxes. However, I am proud to be British, proud to live in Britain, and proud to make my contribution by paying my taxes here.'

Mr. Ecclestone said his divorce was a 'private matter', but there was nothing contrived or artificial about the transfer of assets to his wife in 1996.

A lawyer for the family trusts, meanwhile, said: 'Mr. Ecclestone has not exerted, and has never sought to exert, any control over the management of the trusts.' The lawyer also said that the transcripts from the German prosecutor contained errors – but did not say what they were.

Slavica Ecclestone's lawyer said the family trusts were managed by appointed trustees who did not include Mr. Ecclestone. Dailymail.com

Magnussen dip part of 'learning' – Boullier
(GMM) Kevin Magnussen is going through the same sort of rookie "processes" endured in the past by the likes of Vitaly Petrov and Romain Grosjean.

That is the claim of new McLaren team boss Eric Boullier, who at his former team Lotus helped to get the latter two drivers up to speed in formula one.

In Danish rookie Magnussen's case, the 21-year-old got his F1 career off to a stellar start in Melbourne with a debut podium, but his and McLaren's form has since dipped.

"They went through the same processes and it's part of the learning curve, unfortunately," he said. "They need experience, they need to be able to understand the car.

"The F1 car – setup wise – is much more complicated than the junior categories, so it's just part of the learning progress. And he's not helped by the fact that he has a car that is not so easy to drive today," Boullier added.

Magnussen agreed that the four races so far in 2014, including the more difficult run since Melbourne, have been good for "learning".

"At this point for me it's all about learning," he said. "I need good results but I need to learn along the way as well."

At the weekend, the Swiss team headed to engine supplier Ferrari's private test circuit, Fiorano, to give the "affiliated driver" her first F1 experience.

Over the two days and an impressive 180 laps, the 25-year-old was at the wheel of a 2012-spec Sauber C31, but it was not wearing the Hinwil based team's usual dark grey livery.

In fact, it was Sauber's very first outing at Fiorano since 2005 with Jacques Villeneuve.

The man paying for de Silvestro's F1 program is Imran Safiulla, according to the Swiss newspaper Blick.

It emerges that de Silvestro will actually do no fewer than 10 test days this year, with the next outing to take place at Valencia, Spain.

"It's not the cheapest thing in the world," said Safiulla, "but we can build something for the future."

Safiulla is a wealthy industrialist who has supported de Silvestro's racing efforts since 2006, including buying into the IndyCar team KV.

At Fiorano, Sauber's 2012 car was painted in a special white, blue and green livery, with 'Clean Air Energy' and 'Hybrid' decals, although the car was V8-powered and not equipped with KERS.

European Union could investigate F1 group – report
(GMM) The European Union is "monitoring" the controversial new system of decision-making within formula one, it has emerged.

Earlier this month, we reported that F1's four smallest teams – Marussia, Caterham, Force India and Sauber – had written a letter complaining about the new and rule-influential Strategy Group.

The Group is made up of the grid's powerful 'big five' teams and, for historic reasons, Williams, who recently vetoed FIA president Jean Todt's plans for a 2015 budget cap.

"We have a situation where we have enriched and empowered five teams and disenfranchised six," he said.

Germany's Sport Bild suggested that the letter, described as "explosive" by one team insider, made clear the small teams' belief that the Strategy Group could be contrary to European competition law.

Now, the London newspaper The Times claims that European Union officials, specifically the competition authority, are "monitoring" the situation.

"A full (EU) investigation would throw F1 into turmoil, potentially wrecking agreements and finishing any prospect that the sport could be floated on the Singapore Stock Exchange", correspondent Kevin Eason said.

Eason revealed that "two people close to the sport" have already been interviewed by European officials, who are "said to be showing concern".

They are reportedly also concerned about the FIA's current role, after a previous EU investigation ruled that the governing body not be involved in F1's commercial matters.

"We simply cannot run a sport like this," said Fernley, who will be at a crucial meeting involving Todt and Ecclestone in London on Thursday.

The Milton Keynes based team has been pushing to emerge from its pre-season crisis involving troubled engine supplier Renault.

But at the same time, German Vettel – the reigning quadruple-consecutive drivers' world champion – has been struggling simply to keep up with his fresh-faced new teammate, Daniel Ricciardo, following the sport's V6 rules switch.

Further up the grid, Hamilton and his Mercedes have been dominating, but in an interview with Germany's Bild am Sonntag newspaper, the 2008 world champion commented on Vettel and Red Bull's plight.

"As a four time world champion, Sebastian needs to show his leadership inside the team now," Hamilton is quoted as saying.

"When it comes to the crunch, you are able to show that leadership to your team," he added.

Indeed, Hamilton expects Vettel and Red Bull – formerly a near-unbeatable combination in F1 – to eventually get back to winning.

"Regardless of the power unit, it's still a strong car," said the Briton, referring to the Adrian Newey-penned RB10. "So I don't believe that the current situation will stay the same."

Hamilton also commented on his ever-intensifying rivalry with Mercedes teammate Nico Rosberg, in the wake of their forceful wheel-to-wheel battle in Bahrain.

"We both know what we are doing," he said, amid reports the Brackley based team is at odds over whether to rein in their battle with some form of 'team orders'.

"Nico is fair and aggressive, but not wildly aggressive," Hamilton said. "Just the right amount. The real problem is that he is faster than ever before."

Late last week, multiple media sources claimed the former Ferrari and Mercedes driver's manager, Sabine Kehm, had told the RTL broadcaster that Schumacher had woken up after 17 weeks in a coma and 'recognized his wife' Corinna.

"Sorry," said Nicola Pohl, a respected correspondent for the major German daily Bild, "but those rumors from Spain are apparently not true.

"Kehm just texted me (saying) she hadn't confirmed anything to RTL," she added.

Indeed, Kehm has now told the German tabloid Kolner Express that she made no such comments about Schumacher's continued awakening to RTL or anyone else.

"Since doing the ARD talk show (two weeks ago) … I have not spoken to anyone about Michael Schumacher," she confirmed.