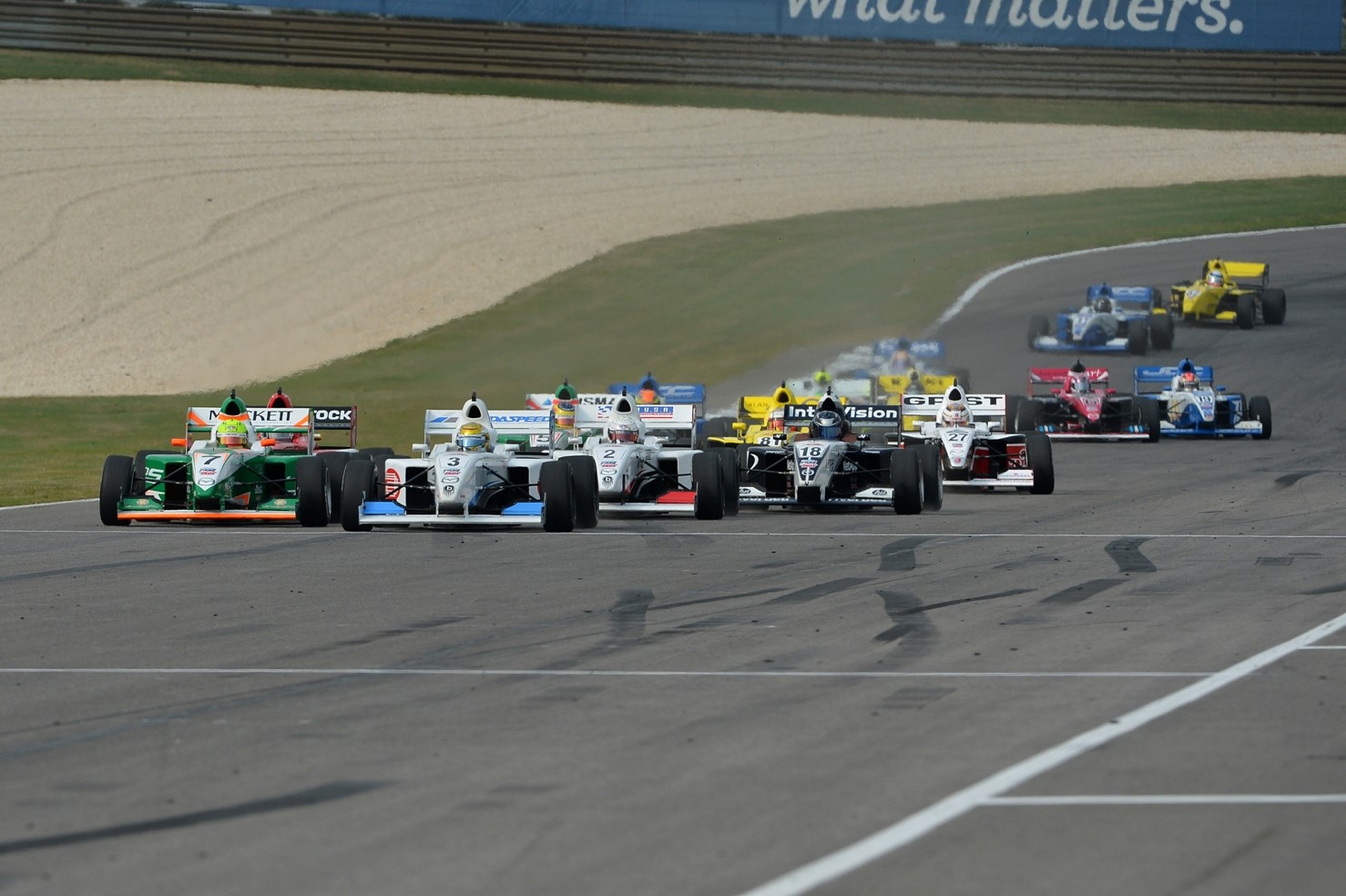 Rising American star Spencer Pigot remains perfect in this year's Pro Mazda Championship Presented by Cooper Tires, sweeping both of this weekend's races at Barber Motorsports Park and extending his unbeaten win streak to four. But once again he had to work hard as 2013 USF2000 Champion Scott Hargrove took the pole and pressured him through most of this morning's 20-lap race.

Hargrove started from pole position for the fourth round of the championship, which was held in distinctly cooler conditions in comparison to yesterday and under cloudy skies. The 19-year-old Canadian was unable to solidify his advantage at the start, however, as Pigot remained on his outside all the way around Turn One which gave him the preferred inside line heading into the long, right-handed Turn Two. It was an aggressive move by Pigot, and ultimately one that would prove decisive.

The race was neutralized briefly on Lap 2 due to a spin farther down the 20-car field, and at the restart Hargrove redoubled his efforts to regain the advantage. Several times he drew alongside Pigot's Doug Mockett & Company/Rising Star Racing/Vitamin-DPro App/California Scents-Juncos Racing entry, but each time Pigot was able to hold him off.

The two leaders traded fastest laps as Hargrove continued to pile on the pressure before Pigot edged out a slight advantage by half-distance. The gap grew slowly but steadily thereafter as Pigot sealed the additional championship point for fastest race lap.

Hargrove's second runner-up finish in as many days with the MAZDASPEED/Analytic Systems/Race Energy/Metal Action Machining car for Cape Motorsports with Wayne Taylor Racing marked his third consecutive podium, bringing him equal on points with Kyle Kaiser, who finished fifth this morning for Juncos Racing.

Shelby Blackstock made a fine start to jump ahead of Neil Alberico (Cape Motorsports with Wayne Taylor Racing), as did Pipo Derani (Team Pelfrey), who overtook Juncos teammates Kaiser and Jose Gutierrez at Turn One and Turn Five respectively, then found a way past Alberico at Turn Eight. Alberico lost another position to Kaiser at the restart, after which the top six positions remained static.

Contingency awards included the Quarter Master Hard Charger Award for most positions gained to Brandon Newey, who advanced from 16th to 12th ; the PFC Award and customized Race Energy charger – the official battery of the ladder series – to Juncos Racing; and the Staubli Award to Blackstock.

Pigot earned the RePlay XD Move of the Race Award for his pass on Hargrove at the start.

Spencer Pigot, #7 Doug Mockett & Company/Rising Star Rising/Vitamin-D Pro App/California Scents (Juncos Racing): "I knew going in that as long as I had one wheel alongside Scott, I was going to go for it. Luckily, I had a little more than that – I was alongside or even a little bit ahead. It was a bit closer than I would have liked but that's what you get for starting second. You never know when you go side by side what's going to happen on the exit. We were as close as we could get without touching; I'm actually surprised there isn't some rubber on the side of the car. I went a little defensive into Turn Five – I was trying to hold him up and then get a run but he didn't slow down, he pulled alongside me. If it had been a left turn instead of a right turn at the end of the backstretch, he would have been by. It was some really good, close racing."