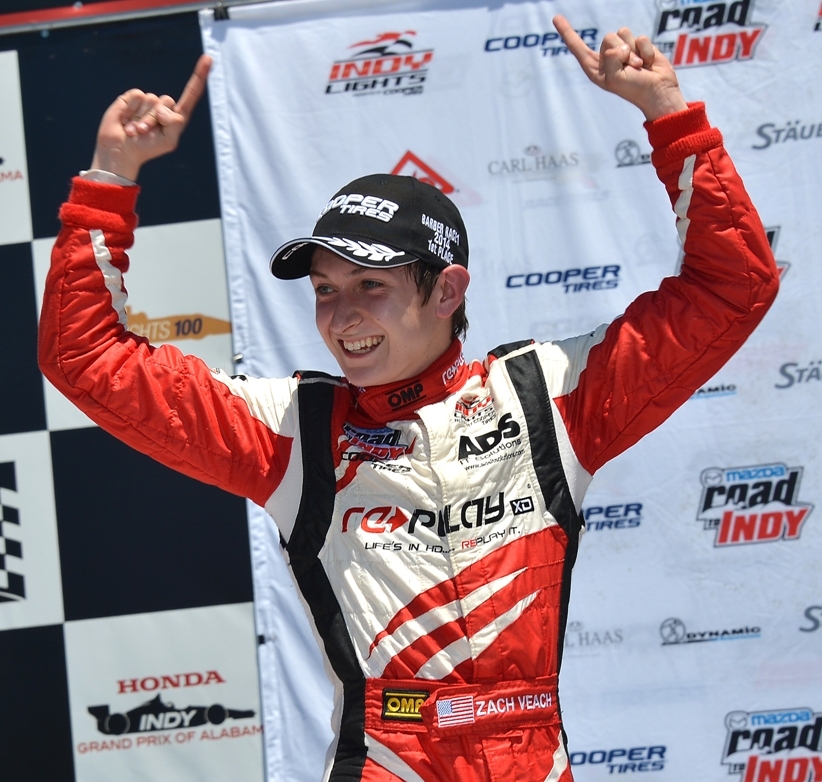 As in the opening two races of the year, Turn One decided the outcome of today's first round of the Legacy Indy Lights 100 at Barber Motorsports Park. Polesitter Zach Veach held off dueling Belardi Auto Racing teammates Alex Baron and Gabby Chaves in the first corner and emerged unscathed from the ensuing fracas to take his second victory of the year.

The first two Indy Lights Presented by Cooper Tires events had seen the second-place starter get a nose in front in Turn One and then keep his competitors at bay for the remainder of the race. Veach, 19, driving the #26 RePLAY XD/The Young Marines/Ads IT Solutions/Zakosi Data Back Up entry for Andretti Autosport, was determined that would not be the case today. Taking a defensive line into Turn One, he left little room for the two Belardi Racing teammates behind him.

Chaves, who started third in the #5 Marca Colombia/Coldeportes car, tried to keep the string of first-lap upsets going, but the young Colombian-American lost traction on the entry to the corner and succeeded only in sending his teammate Baron (#4 Liberty Engineering/13th Avenue) on a wild ride through the gravel. Chaves held onto fifth, albeit with bent suspension. His teammate wasn't so lucky, resuming 12th and last.

Schmidt Peterson Motorsports with Curb-Agajanian teammates Luis Razia, from Brazil, and Jack Harvey, from England, who started fourth and fifth respectively, made it safely through the Turn One scuffle and took over the second and third positions, with Veach's Andretti Autosport teammate Matthew Brabham hot on their heels. As the trio battled, Veach was able to focus on the task at hand – checking off the laps.

Baron meanwhile stormed back through the field, looming large in the mirror of teammate Chaves before passing him for fifth position on Lap 24. Baron's move on Juan Pablo Garcia for sixth one lap earlier earned him the RePlay XD Move of the Race.

Razia finished the 30-lap race in second position, 3.84 seconds behind Veach, with Harvey in third another five seconds behind (and just ahead of Brabham). With the victory, Veach takes a 26-point lead over Chaves in the championship after three races, at 146 to 120.

Zach Veach, #26 RePLAY XD/The Young Marines/Ads IT Solutions/Zakosi Data Back Up (Andretti Autosport): "We got very lucky at the start. I thought I was going to get caught up in it. I saw Alex and Gabby coming in, so I took a bit of a defensive line. I knew the track really tightened up there, so I wanted to stay in the middle. I thought that would give me the best shot. The start is extremely important here, because it is very hard to pass.

"I'm happy to get the win. The team did a great job. We're especially happy to do this for JF Thormann (Andretti Autosport COO) who recently had heart surgery. This win is for him."