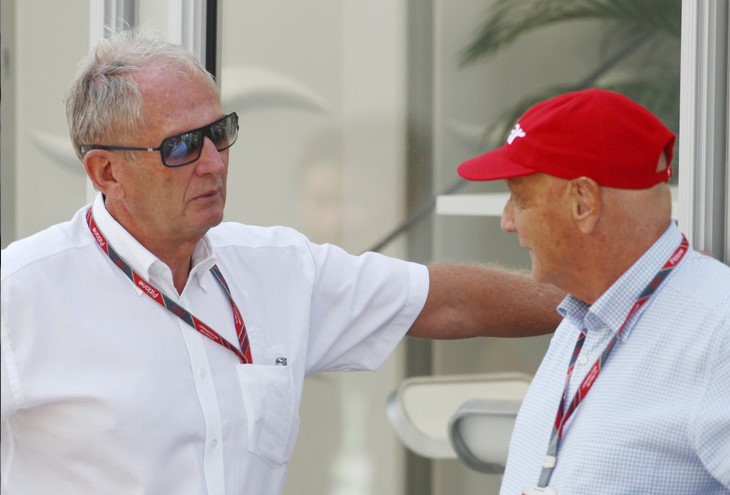 The FIA court did not agree, so to smooth the waters, Mercedes chairman Niki Lauda in China offered Red Bull a peace-offering in the form of a famous Austrian chocolate cake, a Sachertorte.

"He thinks everything is over with a cake," Red Bull's Dr Helmut Marko hit back.

"I think the next time he wants to eat pasta with us, he should put on a bulletproof vest."

Marko is not the only unhappy bunny at Milton Keynes.

In an online column, the Red Bull 'spy' this week said Mercedes' push for a three-race ban was met with "a few pursed lips from our management".

"They've decided to rise above it and not comment," the spy added.

"But down here at the coalface you can be sure we're telling our mates in the next garage along where they can shove that three-pointed star."

It could be the final lap in a long and lucrative career for the 83-year-old Briton, as two courts have already found that he did indeed bribe the already-jailed former F1 banker Gerhard Gribkowsky.

The criminal trial in Germany could see Ecclestone also out of a job and in jail.

In the indictment papers, he is accused of paying $44 million to "win over" Gribkowsky, who has already been convicted in the same jurisdiction for receiving the bribes.

According to F1 business journalist Christian Sylt, quoting from the indictment, Ecclestone offered Gribkowsky "personal gain" in exchange for dispensing "with BayernLB as a formula one shareholder as quickly as possible."

Writing in the Guardian, Sylt said Ecclestone is not commenting this week.

"Under a compliance point of view you have to remember that Ecclestone has already admitted paying the $44 million to Gribkowsky, and for reasons which don't seem to be really kosher," she said.

"It's not exactly an exhibit of integrity. But the justice system still needs to prove his individual responsibility."

Cesare Fiorio, who led the Maranello team before the ultra-successful Jean Todt era, likened Domenicali's departure to that of Aldo Costa, who left Ferrari three years ago.

Designer Costa was responsible for the ultra-dominant 2014 Mercedes project.

"It is a shame that Stefano Domenicali is portrayed in the same manner as the scapegoat before him, Aldo Costa," Fiorio told the German-language Speed Week.

"It is a simplistic point of view, without analyzing the true reasons for success and failure," he added.

However, Fiorio thinks Domenicali's successor, the F1-unknown Marco Mattiacci, needs to be given a chance to perform.

And he thinks Mattiacci's lack of experience is not necessarily a fatal flaw.

"80 per cent of all management decisions are similar, regardless of the industry," said Fiorio.

"Only 20 per cent require the knowledge and experience of the specialist area, but this experience cannot be gained in a month or even a year," he warned.

But Fiorio thinks Mattiacci has time on his side.

"The bottom line is that we can already say that 2014 belongs to Mercedes," he said.

That is the claim of the reigning world champions' Austrian director Dr Helmut Marko, as Red Bull pushes to close the gap to 2014's dominant team Mercedes.

But in China, both Red Bulls were actually beaten by Fernando Alonso's resurgent Ferrari, following a disappointing opening three races for the Italian team.

Marko thinks Ferrari sped up thanks to a new blend of Shell fuel.

"We are also hoping to soon get a fuel that is more efficient," Marko said earlier this week, amid reports Red Bull's current Total fuel may be damaging the mandatory fuel flow sensors.

Marko has now told Germany's Bild newspaper: "Ferrari made a clear leap forwards in China. They have a new fuel. And we'll have some new fuel soon as well.

"Maybe we will have it at the next race in Spain," he revealed, amid engine supplier Renault's obvious horse power disadvantage early in 2014.

"The new petrol will bring us two, maybe even three tenths," added Marko. "So that we can have at least a chance of overtaking Ferrari.

"On Sunday (in China), our drivers could have done whatever they wanted, but they could not have passed Alonso," he said.

Lopez 'surprised' by Raikkonen struggle
(GMM) Kimi Raikkonen's last team boss says he is "surprised" the Finn is struggling so much at the wheel of his new F1 car.

The 2007 world champion, who had returned to the sport with the Enstone team after a rallying sabbatical, switched to Ferrari for 2014 following a Lotus pay dispute.

But while Raikkonen was highly competitive at the wheel of his black and gold car, the 34-year-old has struggled notably for pace now that he is back in red.

"With us he was a strong rider, so the gap is a bit surprising," he told Germany's Auto Motor und Sport.

"But I also know how good Fernando (Alonso) is — just imagine if he had had a Red Bull to himself for the past few years.

"But we also know how good Kimi is," Lopez continued. "It is a new team for him, and with Kimi a lot depends on what is happening around him.

"With us he was always fully comfortable, even though of course I cannot exactly know why things are not going right for him."

No name change after ownership split – Marussia
(GMM) Marussia is not planning to change its name, even though the F1 team is no longer owned by the Russian supercar maker.

It emerged two weeks ago that the British-based team has split with Marussia Motors, who according to Russian reports is shedding staff and no longer making supercars.

A team spokeswoman had explained that the team is now owned by another company with a Marussia-themed name, Marussia Communications Limited.

"Contrary to some reports we've never been owned by the car company," he told Press Association.

"Although there is obviously a marketing link, beyond that there is no direct impact on us at all," Lowdon said.

"Financially we're fine, or as much as a formula one team can be!" he added.

Lowdon also said Marussia is not planning to change its name.

"The whole Marussia concept goes beyond a car business, and we've not had any approach from Andrey to suggest otherwise at present," he said.

"So it's business as usual."

Ferrari will not give up, Fry insists
Ferrari engineer Pat Fry has said the Scuderia has no intention of giving up, although he concedes Mercedes does have a considerable performance advantage.

Fernando Alonso gave the Maranello squad its first podium of the 2014 Formula 1 season in Shanghai last weekend, and while Fry believes this is proof the team is making progress, he knows there is a long way to go, especially as Kimi RÃ¤ikkÃ¶nen could do no better than P8 in the sister car.

"This result [third] is a reward for the effort that all the team is putting into every area," Fry said after the Chinese Grand Prix.

"This weekend we made some progress and in general, the speed of the car has increased, both in the corners and on the straights," he added.

"But we have to be realistic about our current potential and continue working, because the gap to Mercedes is still big and no one within our team has any intention of giving up," he vowed.

Alonso: No promises for Barcelona
Ferrari's Fernando Alonso has said he 'cannot promise anything' for the Spanish Grand Prix next month.

Alonso took his first podium of the 2014 Formula 1 campaign last weekend in China, but while he was encouraged by his form there, he is uncertain about what he will be able to achieve on home soil at Barcelona's Circuit de Catalunya.

"We need to see. We need to remain very calm. It has been a very unique race [here], we make a step forward. We were ninth and tenth fifteen days ago [in Bahrain] and that was hard. So, yeah, we need to remain calm. We are happy, we need to enjoy the result but still a long way to go and we cannot promise anything for Barcelona," he said.

"We will give 100 per cent again and we will fight – but in terms of result we need to remain very calm and see how development is these three weeks [and] if we can bring some extra new parts for Barcelona."

Meanwhile, after saying on the podium that the Scuderia was 'still in the fight', he was a little more circumspect when quizzed further on if Ferrari can really catch up with Mercedes and vie for the titles.

"We need to close, we need to catch them [Mercedes] as soon as possible before the championship is over," Alonso continued, "so we need to keep scoring points, as many as we can now that we are not super-competitive, try not to lose too much ground on points in the championship, and if in one race we become as competitive as them, try to catch up in terms of points."

"At the moment, it seems very far away because they have a big advantage and we need to work really hard if we want to have that possibility. There is nothing really special we can do, just don't give up; we're in the fourth race in the championship, there is still a long way go but being super-realistic, knowing that the gap is very, very big it's going to be very tough," he added.

Hamilton not thinking about title because he knows he will win it
Mercedes driver Lewis Hamilton has insisted he is not 'wasting a thought on the championship' at the moment, even though his third win in succession in China last weekend has moved him to within four points of team-mate, Nico Rosberg.

Hamilton is quickly establishing himself as the favorite to take the 2014 Formula 1 Drivers' title, to repeat what he managed with McLaren back in 2008. However, despite that though, he isn't getting carried away and is mindful that the season is still young.

"To be honest I don't waste a thought on the championship right now," confirmed the Briton in an interview with the official F1 site. "I am happy about those three wins – feeling that I am still able to improve with every race, that I am physically and mentally stronger than ever before."

"These are the important messages for this man here," he added, pointing at himself. "There are so many psychological battles involved in sports. Nico is very fast, so I am happy having put in some really good performances. Being with such a fantastic team makes me very grateful."

Quizzed on what can be expected when the European season kicks off next month with the Spanish Grand Prix, Hamilton replied: "That it is getting even more tight. That there will be more battles somewhere – hopefully behind me."

"But I don't mind being in the battles, as long as the car is so fantastic. I feel really blessed to be with this team," he concluded.