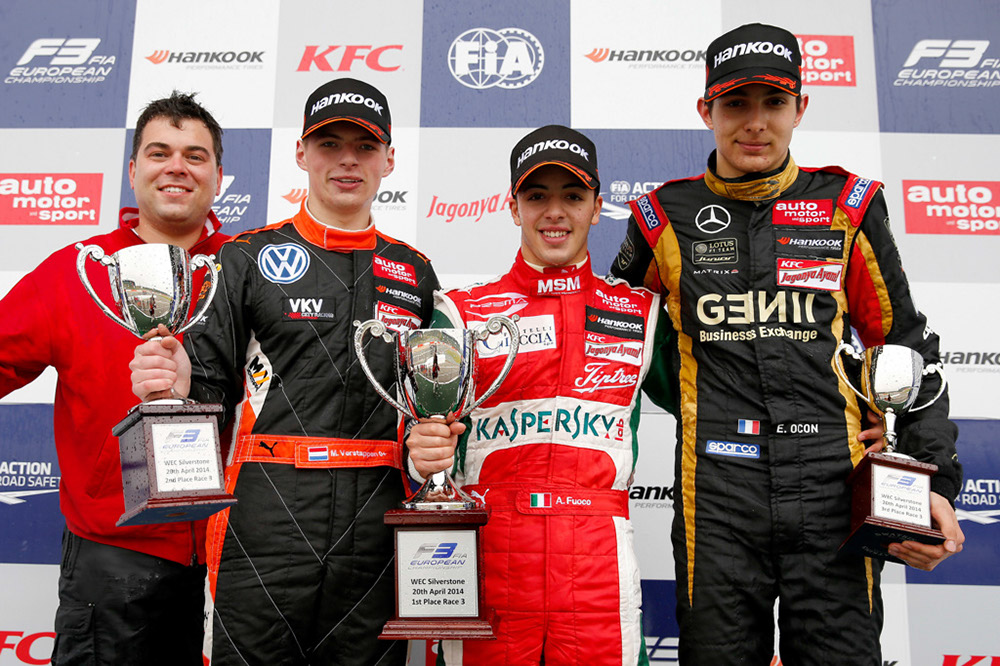 The 5.891 kilometers long Formula 1 circuit at Silverstone in the UK seems to suit the rookie drivers in this year’s FIA Formula 3 European Championship in particular. 17-year-old Esteban Ocon (Prema Powerteam) already having won the second race of the season, his team-mate of the same age, Antonio Fuoco (Prema Powerteam) clinched the winner’s trophy after the third race. The Italian, a protege of the Ferrari Driver Academy, finished ahead of 16-year-old Max Verstappen (Van Amersfoort Racing). Lotus F1 junior driver Esteban Ocon also stepped onto the podium after finishing third. He is leading the FIA Formula 3 European Championship drivers’ standings.

Antonio Fuoco laid the foundation for his maiden FIA Formula 3 European Championship race win at the start as he managed to overtake Esteban Ocon, who had started from pole position. The Italian withstood the Frenchman’s attacks and already pulled clear from the rest of the field in the opening stages. While Fuoco extended his lead throughout the race, Ocon came under increasing pressure from Max Verstappen. On lap two, the Dutchman first overtook Tom Blomqvist (Jagonya Ayam with Carlin) and also made his way past Ocon on lap eleven. The son of ex-Formula 1 driver Jos Verstappen took the checkered flag in second place.

Antonio Fuoco (Prema Powerteam): “My race start was fantastic, I managed to overtake Esteban right away. I believe that was the key to success. This was my first weekend in the FIA Formula 3 European Championship and I am really delighted that I can already celebrate my first win."

Max Verstappen (Van Amersfoort Racing): “The first race didn’t go as I wanted. The second one was better already and the third one even better. I made a good start and I was able to battle for the top positions right away. Towards the middle of the race, my tires started to degrade but I still maintained a good pace."

Esteban Ocon (Prema Powerteam): “Antonio’s start was better than mine so that allowed him to overtake me for the lead. In the first two laps, I was faster, but I couldn’t overtake him. Perhaps, I was running too closely behind him at that time and ruined my front tires while doing so. All in all, however, it has been a great weekend for me."