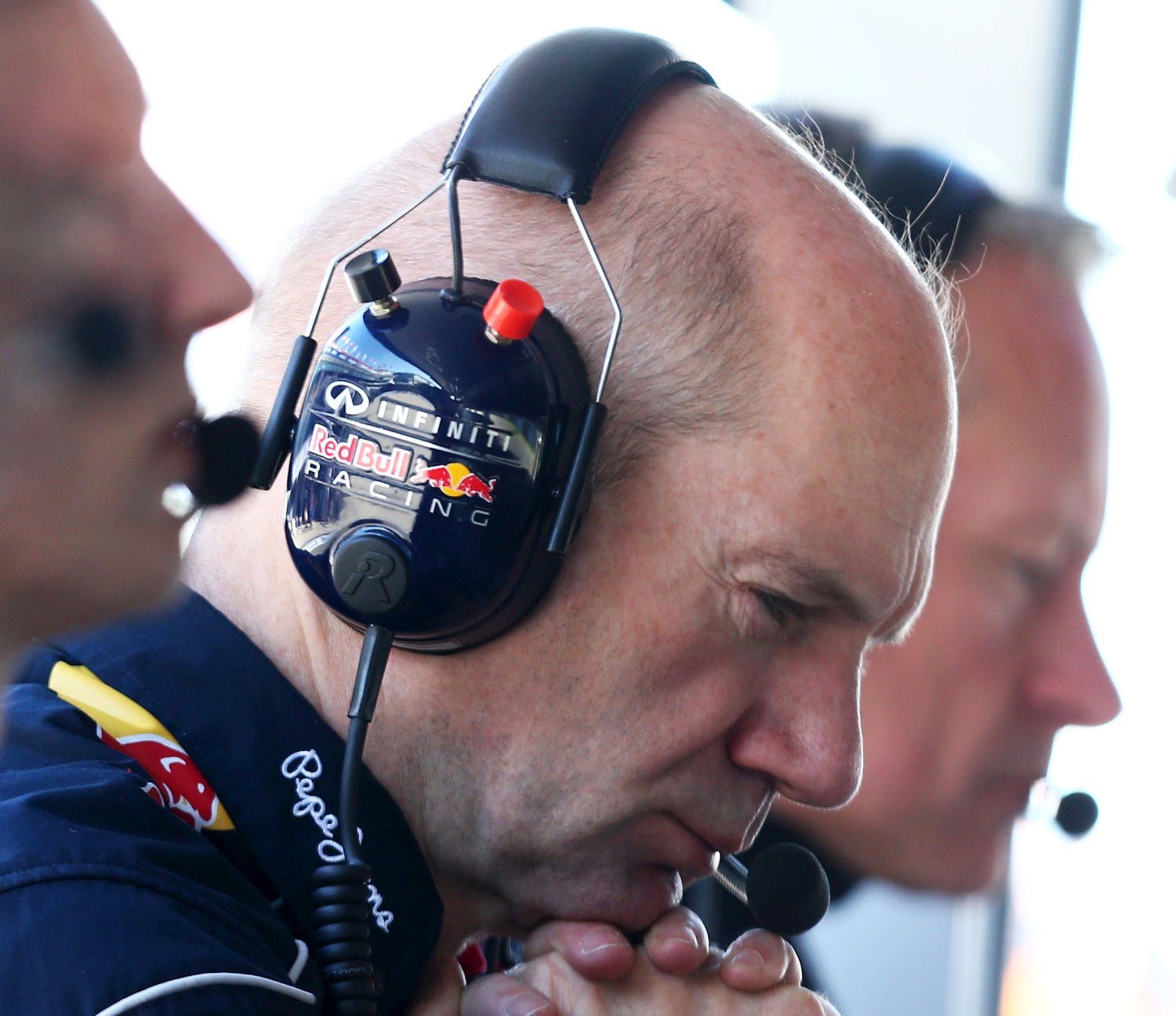 Newey with Webber at Silverstone, not in China
(GMM) Adrian Newey chose overcast Silverstone over smoggy Shanghai for the weekend of the Chinese grand prix.

Speed Week reports that Red Bull's technical boss will not be on the Shanghai pitwall on Sunday because he is actually trackside at Silverstone.

It is at the British grand prix venue that the season opener of the world endurance sports car championship is taking place, and Newey has been spotted chatting with Red Bull's newly-retired driver Mark Webber.

This weekend, Australian Webber is kicking off his new career as Porsche's lead prototype driver.

"It was just a shorter journey to Silverstone than it was to Shanghai," a smiling Newey explained.

It emerges that in qualifying in Shanghai, the reigning world champions struck trouble with the Gill-supplied device yet again.

To avoid a Melbourne-style disqualification, Red Bull reportedly adhered to an interim agreement reached with the governing FIA to revert to other measurements in the event of a sensor failure.

In the meantime, the search for the problem continues.

Speed Week correspondent Matthias Brunner has quoted the FIA's technical expert Fabrice Lom as explaining that the Total-supplied fuel is probably the culprit.

"On the sensor there is a seal that the chemical composition of the Total fuel could be damaging," Lom reportedly said.

"If this is happening, then the sensor would not work correctly."

Less clear, however, is why the Total fuel is damaging mainly Red Bull's sensors, rather than the ones used by the other three Renault-powered teams.

Meanwhile, it appears Red Bull is not ready to forgive rival Mercedes, after the German team called on the reigning world champions to be banned for three races for appealing Daniel Ricciardo's Melbourne disqualification.

Mercedes chairman Niki Lauda on Saturday made a peace-offering in the form of a Sachertorte, a famous recipe of Vienna chocolate cake.

But Red Bull's Dr Helmut Marko told Bild: "He thinks everything is over with a cake.

"I think the next time he wants to eat with us, he should put on a bulletproof vest."

Last month, when Eric Boullier became the British team's new chief in the wake of supremo Ron Dennis' return to power, it was rumored Whitmarsh agreed not to speak to the media while his contract payout is negotiated.

"Martin is a friend," Dennis said in March. "Some decisions you take in life are not that easy, and I will not elaborate."

Britain's Daily Mail now reports that while Whitmarsh's severance package is still being negotiated, it is "likely" to be around $10 million.

Correspondent Jonathan McEvoy said the figure is more than $400,000 for each of the 24 years Whitmarsh served at McLaren.

Father Jan at races distracting – Magnussen
(GMM) It seems Jan Magnussen will not be a regular fixture at grands prix this year.

The former F1 driver had to miss his son Kevin's grand prix debut in Melbourne last month because he was racing a sports car on the other side of the world.

He was trackside for race two in Malaysia, amid his deliberations about whether to quit his own racing career in order to support his son's.

"Now Kevin is in formula one I've thought a lot about how long my career will go on," said Magnussen snr, who was a teenager when Kevin was born.

"I've got to decide whether I can focus on what I'm doing or whether I'd rather be with Kevin."

But in China for the fourth round of the season, Kevin has now revealed he prefers to travel the world alone.

Asked by the Guardian if he would welcome his father quitting his own career to support his, the 21-year-old paused before replying: "Not really.

"I'm quite happy to be alone. For the reason that if I have family round I feel a distraction."

Magnussen said he enjoys talking with his father about racing and F1, "but it's not a help at the race."