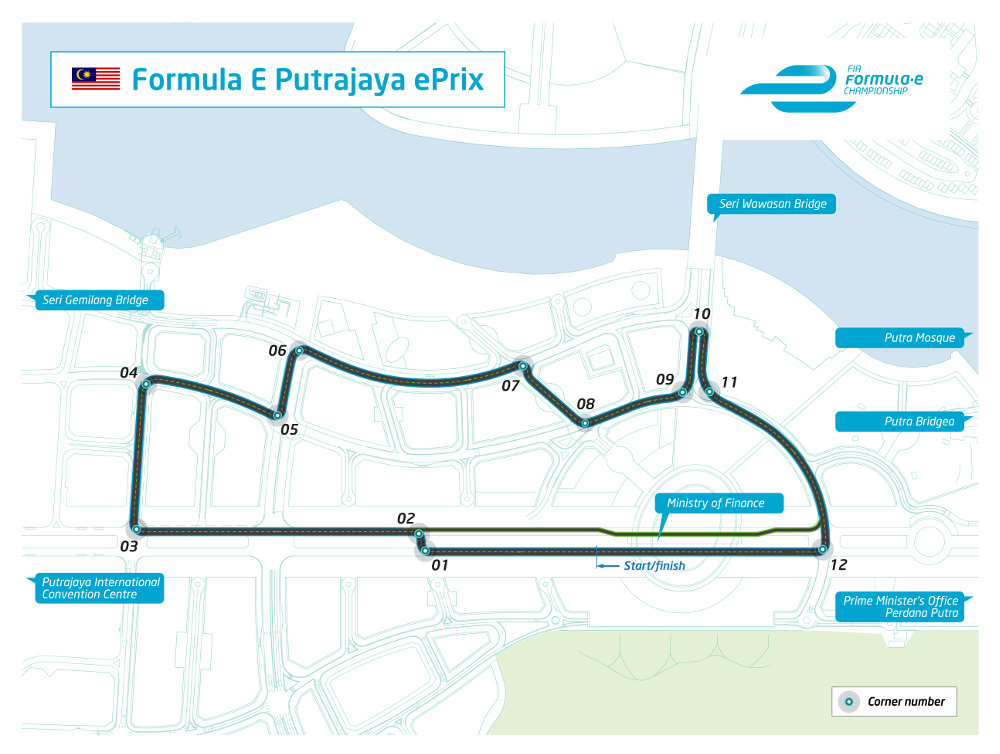 Circuit details for the second round of the 2014/2015 FIA Formula E Championship have today been revealed with the layout of the new Putrajaya ePrix.

The Putrajaya Formula E race, or ePrix, takes place six months from now on October 18 and forms the second of 10 races for the inaugural 2014/2015 season. It has been put together by the FIA, Formula E and local promoter Formula E Malaysia (FEM).

Formula E is the FIA’s new fully-electric single-seater championship beginning in September. Racing entirely on temporary city-centre race tracks, it features 10 teams, each with two drivers, using cars capable of speeds in excess of 150mph (225kph). It’s designed to appeal to a new generation of motorsport fans, whilst accelerating the interest in electric vehicles and promoting sustainability.

At 1.59miles (2.56km) and featuring 12 turns, the street circuit is located near the Perdana Putra housing the Prime Minister’s Office, using much of the main high street and passing several of the city’s most recognizable buildings such as the Ministry of Finance. It also encompasses the beautiful Seri Wawasan Bridge and Putra Mosque. It will see drivers tackle a mixture of straights, slow to medium speed corners, a hairpin plus a tight first-corner chicane providing good overtaking opportunities.

Alejandro Agag, CEO of Formula E, said: “We’re delighted to be unveiling the layout for the Formula E Putrajaya ePrix today. Six months from now, 20 drivers in state-of-the-art electric race cars will be battling it out on the streets of Putrajaya and I for one can’t wait. My thanks go to all those involved for creating this fantastic circuit and of course to our Malaysian partner and their team for their continued support and commitment to promoting sustainable mobility."

Last month organizers revealed the circuit design for the season opener of the FIA Formula E Championship, a 2.14miles (3.44km) street circuit around Beijing’s iconic Olympic ‘Bird’s Nest’ Stadium. The next circuit, the Formula E Punta del Este ePrix (Round 3) on December 13 2014, will be revealed six months prior to the race.

Dato’ Sri Johann Young, CEO of Formula E Malaysia, said: “The Putrajaya circuit is designed with precision, factoring in the city’s environment and Formula E’s sustainable commitment, to provide a robust racing circuit for the drivers. Having support from the relevant authorities and the respective sponsors, we will build a championship that provides a lasting impression for all spectators on that day."

Formula E driver Daniel Abt, who has signed to race for the Audi Sport Abt team, said: “Malaysia is a very special country for racing. The track layout looks very interesting and has a lot of different corners. You have a chicane at Turn 1 after the main straight which gives a good first opportunity for overtaking and slipstream battles. Then you have a mix of slow and medium speed corners which is good for keeping the field very tight and will ensure close racing. I think the next very good overtaking spot will be T6 which is in front of the eVillage [Fan Zone] and should give the spectators a great view of the action. T9 meanwhile reminds me of the very tight hairpin at Macau. All in all the layout looks really promising and will for sure provide great racing. Also, Malaysia’s extreme and unexpected weather conditions should add an extra dimension to the race which is always great for the drivers."

Further details, including ticket prices, will be available soon via the official Formula E website – www.fiaformulae.com – and via the forthcoming official Putrajaya ePrix website and social media channels.