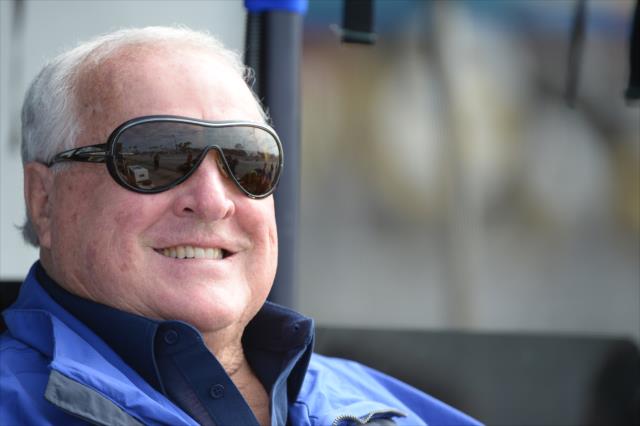 No one likes being forced to retire, no matter the sport. Dario Franchitti of Scotland is no different, but he has seemingly come to grips with it about as well as could be expected from one of the legendary drivers in IndyCar history.

Franchitti, no stranger to scary crashes, suffered some rather serious injuries when he wrecked last October in an IndyCar race in Houston. He fractured two vertebrae, broke an ankle and sustained a concussion.

Today, Franchitti works as an advisor for his former team — Chip Ganassi Racing — and he’s loving every minute of it. Not that he doesn’t miss driving. He does.

“Sometimes, a lot," Franchitti said Sunday at the 40th Toyota Grand Prix of Long Beach. “I don’t miss the pressure that I put myself under, but I do really miss at times driving the car."

He was asked how he goes about satisfying that adrenaline jones after such a successful career.

“I get to do that right here," he said, as he spoke to a reporter inside the lavish Team Ganassi transporter. “I get to help the guys still. I still have that competitive instinct with these guys in trying to make the car faster.

“If we’re not good with any of the guys, I take it personally."

It’s different now, Franchitti said. Whereas his foremost concern previously was how his No. 10 car was doing, “Now I’m pulling for all four of them."

It’s never easy to retire when you’ve had so much success. Drivers and other athletes often miss the adoration of the crowd pulling for them. That sometimes leads to unnecessary and ill-advised comebacks.

“No, it’s not an option," he said. “My IndyCar career probably had another couple of years, maybe. Sports cars, I had really hoped to do that. And LeMans, stuff like that. It’s just not an option. The doctors have said no. You can crash in anything, you can get a concussion and another concussion is not … it wouldn’t be good."

“There are days it’s easier than others, but generally it’s OK," he said. “The reason for it is I still get to come here, I get to work with the team, still the same bunch of people. OK, I’m not getting to do the thing I really love to do, which is drive the car, but I get to be involved in the process of making a car fast.

“And the whole team, that was always the fun part, being part of a team and watching it have success. And those days when you’re having a tough time and you’ve turned it around, those were really gratifying days. And the reaction from the fans at the track has been really nice. That has been very touching."

FOYT WISHES HE WAS A LOT YOUNGER

To say A.J. Foyt had a storied racing career would be an understatement of grand proportions. He is the all-time leader in open-wheel race wins with 67 and he is the only driver to win the Indianapolis 500 (four times), the Daytona 500, the 24 Hours of Daytona and the 24 Hours of LeMans.

These days Foyt, 79, owns and operates A.J. Foyt Enterprises, for which defending Toyota Grand Prix of Long Beach champion Takuma Sato races. Foyt this week spoke with this newspaper about how much he longs for his racing days, and how much he would love to be competing in this day and age.

“I had a lot of fun," said Foyt, who wasn’t at last year’s race because he was having surgery on his sciatic nerve. “I think I miss it more today than I ever thought I was going to miss it.

“You know, I’m getting up in age, but that’s just something that comes along."

Foyt, who also raced stock cars, survived several scary crashes — including one in a NASCAR race at Riverside in 1965 when he was pronounced dead by a trackside doctor before fellow racer Parnelli Jones noticed some movement coming from Foyt — who said today’s open-wheel cars are not as dangerous as those being raced during his time.

“The one thing I like about them is they are so much safer today than it was when I came along," said Foyt, who nearly lost an arm in an open-wheel race in Michigan in 1981. “I lost so many friends through the years, and that’s what this is all about, trying to make it safe.

“Like I say, I wish I was about 30 to 40 years younger. I’d like to be out there with them with those cars they have today. But time passes on and you have to live with it." Long Beach Press Telegram