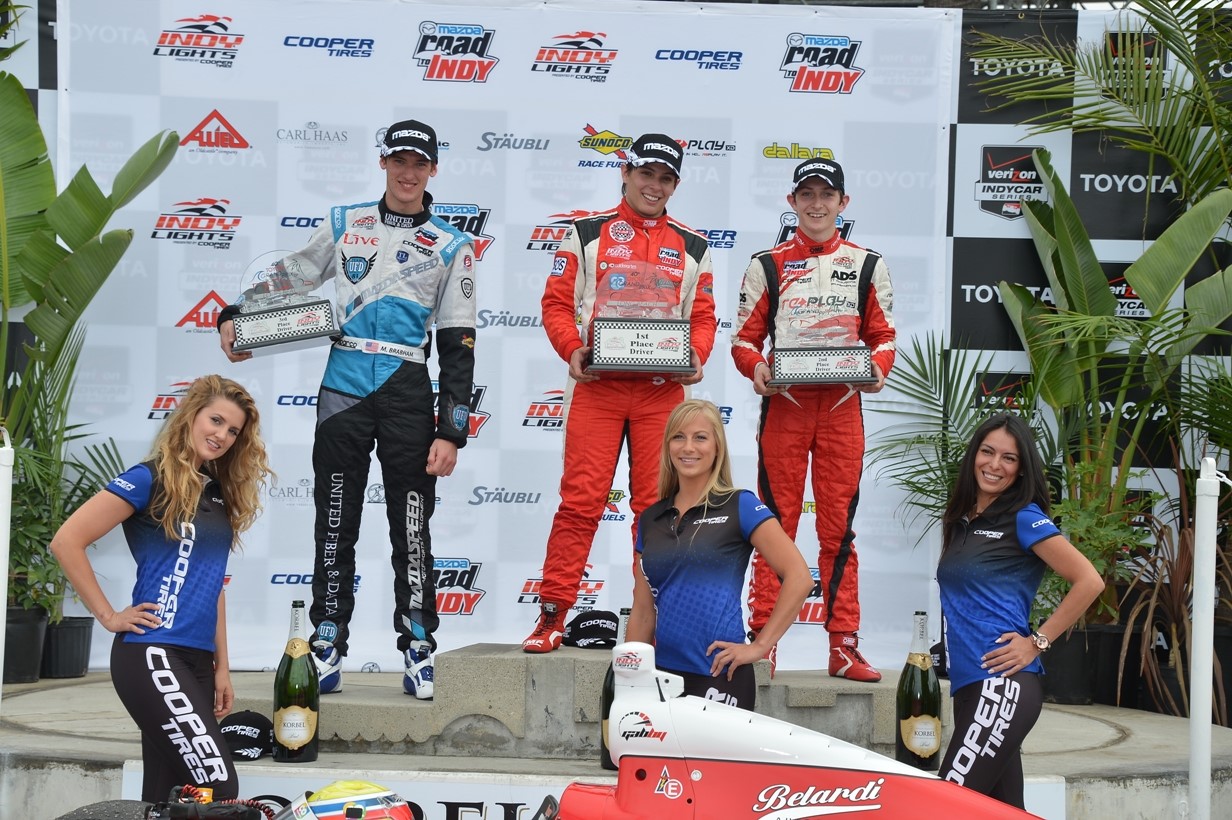 Colombian-American Gabby Chaves turned the tables on Zach Veach to claim a finely judged victory in this morning's Long Beach 100, Round 2 of the Indy Lights Presented by Cooper Tires. Chaves seized the lead at the start and led the entire 45-lap race to claim the second win of his Indy Lights career and the first of the season for Belardi Auto Racing.

That might sound like a straightforward victory for the 20-year-old Chaves, who finished second in the championship during his rookie campaign in 2013, but it wouldn't be an entirely accurate description of the race. In fact, Chaves had to work extremely hard to fend off the attentions of Andretti Autosport's polesitter Zach Veach, who never allowed him to relax. The pair was separated by just 0.6344 seconds at the checkered flag.

Two weeks ago on the streets of St. Petersburg, Fla., Chaves had qualified the #5 Marca Colombia/Coldeportes on the pole, only to be beaten away at the start by Veach, who dominated the remainder of the season opener. This time the boot was on the other foot. After snatching away the pole from Chaves with a magnificent final lap effort yesterday, Veach lost his advantage on the run down Shoreline Drive for the first time.

Chaves edged out to a lead of more than two seconds during the course of the first three laps and appeared to be comfortably in control. Veach, however, driving the #26 RePLAY XD/The Young Marines/Ads IT Solutions/Zakosi Data Back Up Dallara, wasn't about the settle for second. By Lap 19, the gap between the two leaders had dwindled to less than a second. Furthermore, Andretti Autosport teammate Matthew Brabham (#83 United Fiber & Data/MAZDASPEED) was edging closer in third place.

The three leaders were separated by less than a second as they completed Lap 25, but Veach never quite managed to get close enough to make a real challenge for the victory and Chaves made not the hint of a mistake. Veach had little option other than to settle for second.

Brabham glanced one of the omnipresent concrete walls in the closing stages and was fortunate not to damage his car. He was content to bring his car home in third.

Contingency Awards included the Replay XD Move of the Race which was awarded to Chaves for his pass for the lead. The winning team of Belardi Auto Racing was presented with a customized Race Energy BCM21 charger – the official battery of the ladder series.

Points-wise Veach maintains a one-point advantage over Chaves (93 to 92) with Harvey in third (67), Razia fourth (60) and Brabham in fifth (57). Indy Lights Presented by Cooper Tires will return to action for a pair of races at Barber Motorsports Park on April 26/27.

Gabby Chaves, #5 Marca Colombia/Coldeportes (Belardi Auto Racing)
"It was an awesome race. Definitely, after qualifying, I really wanted to take back the lead. We were quickest both practice sessions and really comfortable up in the front. It all came down to Turn One. We had a great start and the clean line for braking into Turn One so I was just able to brake a bit deeper than Zach and control the race from there."

Zach Veach
"Here in Long Beach, it's all about the start. Something happened, so I don't know if we had different wing settings than Gabby (Chaves); he was able to get us going into Turn 1. You run such low downforce here because of the long straightaways, so if you're behind someone, you really can't get close to them. I made a couple mistakes at the beginning of the race, then I was able to get settled in, catch back up to Gabby and ended up with the fastest lap of the race. Now we're identically tied in the championship, so I think it's going to be me and Gabby on the front row a lot, battling this year, and I think Matt (Brabham) is going to be sneaking up, too. I'm really excited to see how the rest of the season goes for the RePLAY XD team."

Matthew Brabham
"It was a tough race; it's so hard to pass here. Zach (Veach) was behind Gabby (Chaves) there, and I think midpoint in the race, the Andretti Autosport cars were a lot quicker than he was, so we caught him and just couldn't make any passes. I think by the end of the race, all of our tires were falling off and looks like these guys were able to manage them a bit better than I did. The United Fiber & Data/MAZDASPEED car and I, we were just hanging on at the end there – I grazed the wall a couple of times, it was pretty fun (haha)."