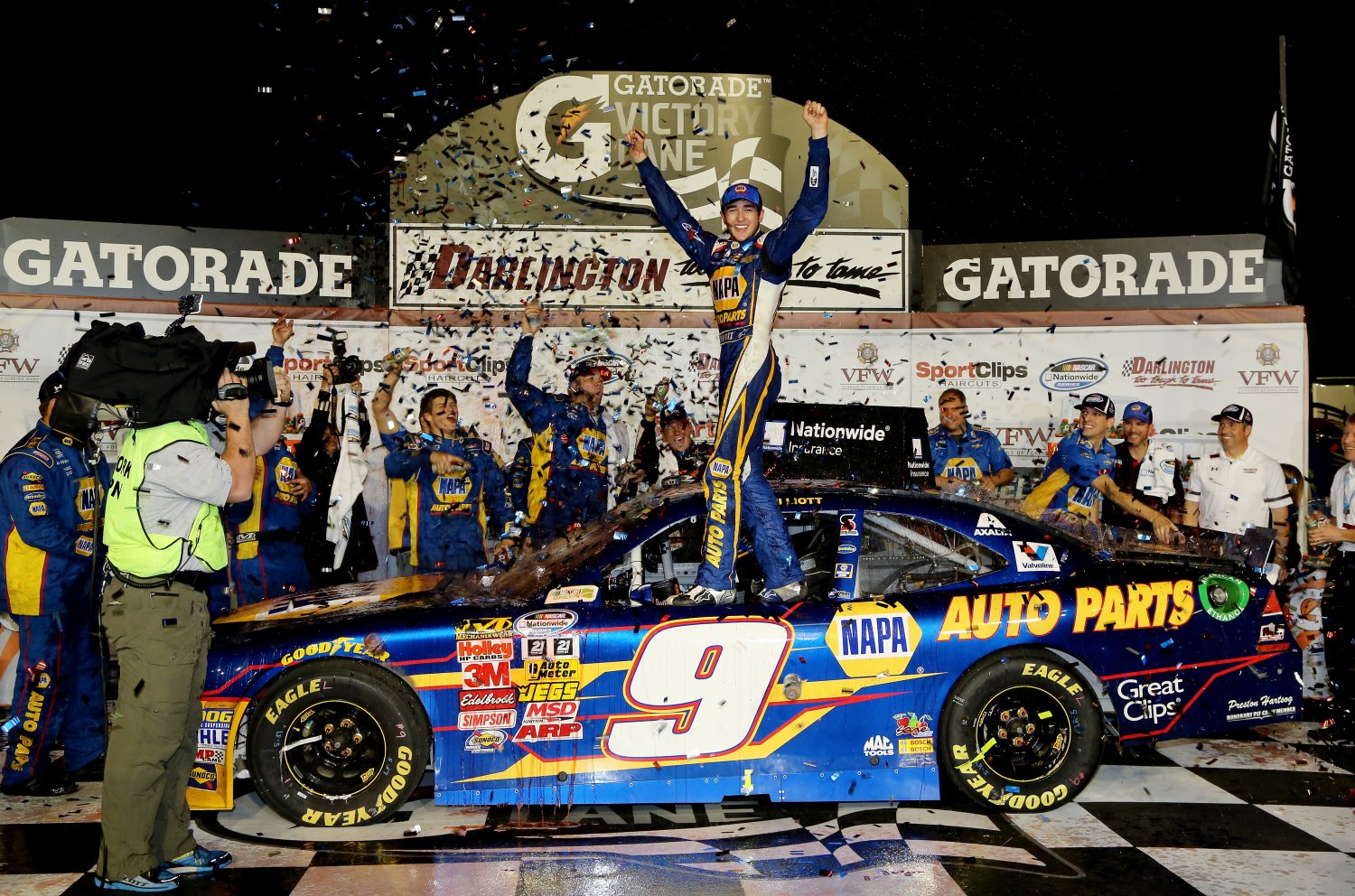 There's a new sheriff in town, and he's barely legal.

With a banzai run in a two-lap dash to the finish of Friday night's NASCAR Nationwide Series race at Darlington Raceway, 18-year-old Chase Elliott muscled his way past Elliott Sadler on the final lap to score his second straight win in his seventh start in the series.

Elliott, who restarted sixth on Lap 146, charged to the front and claimed victory in the VFW Sport Clips Help a Hero 200 in his first event at the fabled 1.366-mile track. The victory was Elliott's second in as many weeks and the second of his career.

"I knew the guys on two tires (Sadler and Kyle Larson) were going to be a little slower than the guys on four," Elliott said of the final restart. "Our lane went and Elliott (Sadler) got a little loose off (Turn) 2 and let me get to the outside, and that was where I wanted to be anyway."

"Darlington has always been my favorite place to watch a race," said Chase Elliott, the youngest driver ever to win at Nationwide Series race at Darlington at 18 years, 4 months, 4 days. "Just to be a part of this race is unbelievable.

"To win this thing is a day I'll never forget."

Elliott also is the youngest driver ever to win two NNS races, and he's the youngest driver to lead the series points standings, a feat he accomplished for the first time last week at Texas. On Friday night, Elliott extended his points lead to 13 over Regan Smith, who recovered from a spin to finish eighth.

Elliot asserted his superiority early in the race. After restarting fourth on Lap 24, he made short work of the cars in front on him. On Lap 27, he stormed past Kevin Harvick and Kenseth into the second spot and seven laps later sped by Busch, the polesitter, for the lead.

Harvick followed into second place four laps later, and the top three — Elliott, Harvick and Busch — remained constant until NASCAR called a caution on Lap 59 for debris on the backstretch. During pit stops under the yellow, Harvick and Elliott swapped the top two positions, and Harvick led the field to green on Lap 65.

By the time they got back to the stripe, Elliott had retaken the top spot, but the green-flag run didn't last long. On Lap 68, a wild wreck involving the Chevrolet of Dylan Kwasniewski and the Ford of Chris Buescher slowed the field for the third time.

Elliott controlled the action through two subsequent yellows but lost four positions during pit stops under caution on Lap 89 for Smith's spin in Turn 1. Busch assumed the lead off pit road, with Kenseth, Harvick, Larson and Elliott trailing for a restart on Lap 94.