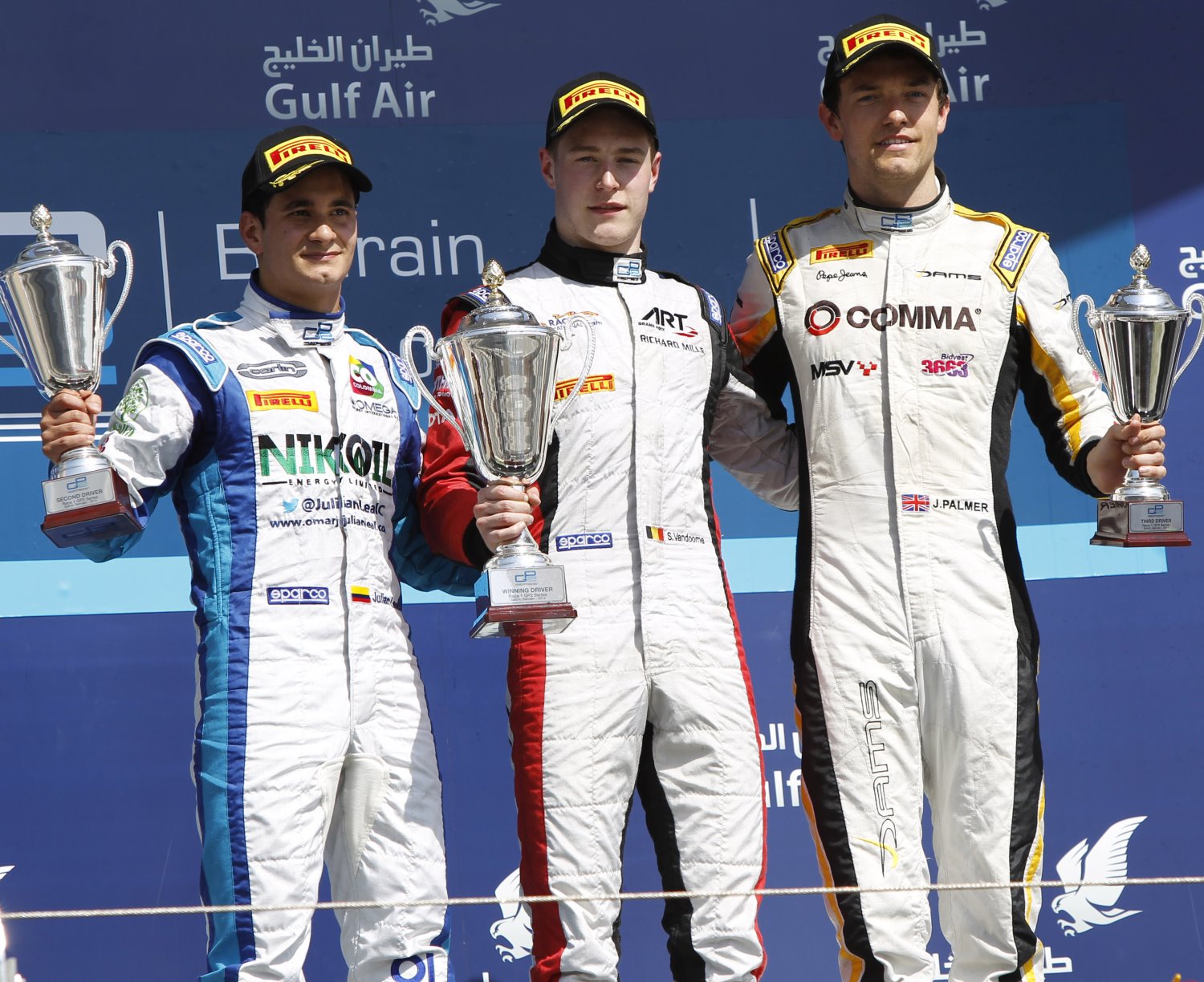 McLaren protege Stoffel Vandoorne made a stellar GP2 debut today at Bahrain International Circuit: he led the majority of his first race from lights to flag in a display of mature and calm driving. He crossed the finish line 1.5s ahead of Julian Leal who disposed of poleman Jolyon Palmer in the closing stages of the race.

When the first feature race of the 2014 season kicked off, Vandoorne made a perfect getaway from P2 to get into the lead going into Turn 1. Behind the Belgian driver, Stephane Richelmi and Stefano Coletti found a way past Palmer and Daniel Abt who both had a poor start from pole and P3 respectively. Vandoorne was on a mission and tried to build as much of a gap as possible before having to change from Soft to Hard tires.

Drama hit the back of the field on the second lap after Kimiya Sato collided with Axcil Jefferies, sending the Zimbabwean driver into the barrier. The safety car came in ruining Vandoorne’s efforts. When the action resumed, the pitstop window opened and Richelmi, Coletti and Rio Haryanto (then running in fourth) all dived into the pitlane to switch to the Pirelli Hard compound.

Race leader Vandoorne pitted three laps later and came out in front of Palmer who had pitted on lap 7 and had managed to recover from a slow start that saw him drop to sixth place. The ART driver then controlled the remainder of the race keeping a gap to Palmer of about 2s and at the same time managing the degradation of his tires. Behind him, Palmer was busy keeping a charging Leal at bay, the Colombian a bit quicker than the Briton.

Further down, rookie Arthur Pic had a brilliant second stint having pitted on lap 10 and slicing his way up the field and overtaking drivers who were struggling on their tires in the final stages of the race: Richelmi was his first prey followed by Mitch Evans, Haryanto and finally Felipe Nasr to take fifth behind Coletti who controlled his pace from fourth place until the checkered flag.

Another rookie followed Pic’s way although on a different strategy: Kimiya Izawa started on the Hard compound from P23. A late pitstop on lap 21 meant that the Japanese had fresh Soft compounds to fight his way through the field to take sixth place ahead of Simon Trummer. The Swiss driver started from the pitlane on the Hard compound after stalling on the pre-grid. He got into the lead on Lap 18 and remained there until he pitted two laps before the end of the race. He re-joined in ninth and gained two placed before the final lap ahead of Nasr, Rene Binder and Adrian Quaife-Hobbs.

At the checkered flag, Vandoorne savored a well-deserved first victory ahead of Julian Leal who had found a way past a slower Palmer. The Briton was then under the threat of Coletti but Palmer managed to save his podium finish also pocketing the bonus points for fastest lap on top of the two points for pole position.

American Alexander Rossi finished next to last in the bottom feeder Caterham, a career wasted with a backmarker team.