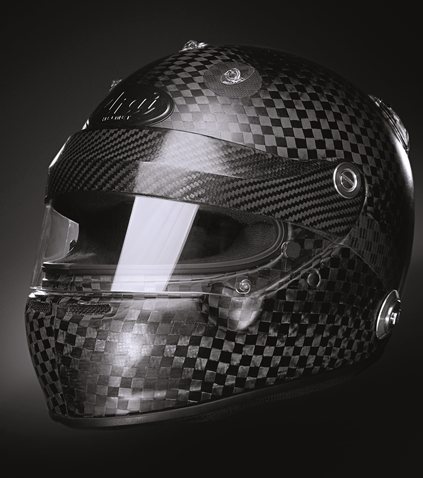 Black, mean and no-nonsense – the helmet pictured here is the zenith of driver head protection. A mere 1,200 gram carbon-fiber shell that can withstand the crushing force of a 55-tonne tank without deforming, and an 800 degree Celsius fire for 30 seconds without its interior rising above 70 degrees Celsius. This FIA-prescribed 8860 racing helmet reached such a peak after years of research and development led by the FIA Institute and leading helmet manufacturers.

It is a remarkable piece of kit, supplied to race (and rally) drivers by Arai, Schuberth and Bell since 2004. Yet the quest for perfection is unceasing. And this season all 8860 helmets will feature a new refinement, a Zylon strip across the top of the visor (also indicated, right, but in prototype carbon-fiber form) that will significantly enhance protection in one of its unavoidably weaker areas – the visor, a polycarbonate medium that of necessity isn’t as strong as the overall shell.

The vulnerability of the visor area was exposed at the 2009 Hungarian Grand Prix, when the helmet of Ferrari driver Felipe Massa was struck by a spring that had become detached from the car ahead. The spring hit Massa’s helmet at precisely the point where visor and helmet shell meet, with a force equivalent to a bag of sugar smacking into his head at 260 km/h (160 mph). Massa suffered a serious injury and, while he has made a full recovery, the incident prompted drivers to ask whether further safety enhancements to the visor area could be made.

The Zylon strip, 50mm tall across the full width of the visor, is the answer. It overlaps the top 25mm of the visor itself and extends 25mm above the helmet shell edge – dimensions that ensure extra protection without further restricting driver vision. It’s a neat arrangement, occupying as it does the area currently covered by advertising strips, so there’s no commercial downside to improved driver protection.

Andy Mellor, the FIA Institute technical adviser, explains that Zylon is subtly different from the carbon fiber used elsewhere in the helmet shell: “In tests we found that Zylon was better than carbon fiber for this application as it offers better energy-absorbing qualities. Our goal for the visor was to get the best performance-to-weight ratio for whatever material we chose. We’ve added about 70 grams to the visor, but we have doubled its impact performance."

Zylon, a synthetic polymer, is already used widely in high-profile applications, such as ballistics-resistant body armor, snowmobile drive belts and the rigging on racing yachts. It is also a familiar material to motorsport engineers – since 2007 the cockpits of Formula One cars have been Zylon-clad and their wheel tethers can be made from Zylon.

The introduction of the strip marks only the first phase of planned enhancements to visor safety. The FIA Institute and helmet manufacturers are currently researching the use of high-performance optical materials – transparent ceramics – as the main visor medium. IQ – www.institutequarterly.com.