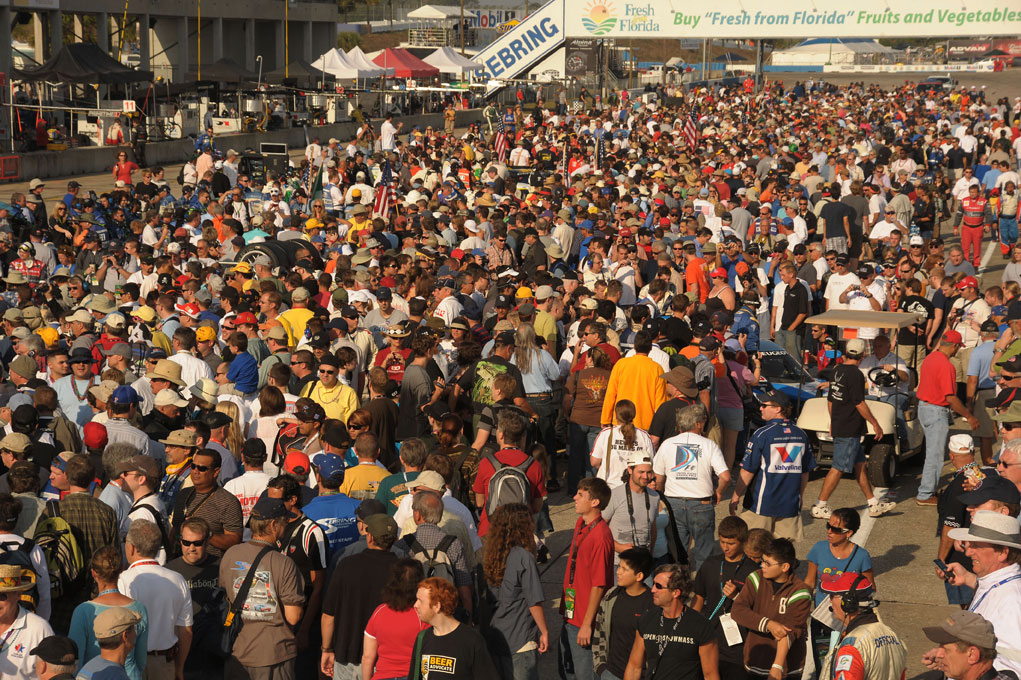 The legendary Green Park infield at Sebring International Raceway for years was auto racing's answer to Woodstock, peaking — if that's the right word — when some risqué activities during the 1980 Mobil 1 Twelve Hours of Sebring were featured in a Hustler Magazine piece accompanied by grainy photos entitled, "Sebring Swings." It should be added that in this case, grainy was a good thing.

Things are far less extreme these days out in Green Park but one thing has not changed — the place is still packed, year after year. The raceway doesn't divulge exact attendance figures because it's somewhat hard to do so accurately, considering that many of the motor homes parked for the week are packed themselves.

Sources said Friday that between 50,000-75,000 would be a safe attendance estimate for Saturday's race. Or, anywhere from five to seven times larger than the population of Sebring.

One of the coolest byproducts of the merger of the GRAND-AM Rolex Series and the American Le Mans Series is the chance to watch a long-overdue faceoff, courtesy of the new TUDOR United SportsCar Championship:

Luhr is the all-time leader in ALMS victories, with 49. Pruett ended up as GRAND-AM's all-time overall victory leader with 41.

Both drivers, and their teams, had some dominant stretches in their respective series, especially Luhr, his co-driver Klaus Graf and Pickett Racing in recent years when the ALMS P1 class had only a handful of cars. In the Rolex Series, Pruett and Memo Rojas combined to win four DP class championships 2008-12 for Chip Ganassi Racing.

Some sports car purists, though, are inclined to place their own personal asterisks alongside both drivers' records, due to the 14-year (2000-13) pre-merger period. But no more, with Luhr and Pruett squaring off in the TUDOR Championship's Prototype class.

The first round, at the season-opening Rolex 24 At Daytona, went to Luhr, more or less: He and Graf co-drove to a fifth-place finish in the No. 10 Nissan ORECA, joined by Alex Brundle. Pruett and Rojas, in the No. 01 Ford/Riley DP with Jamie McMurray and Sage Karam, rolled home in 43rd.

Friday's off-track action was largely about legends, as the Sebring Hall of Fame inducted five members. The ceremony was hosted by perhaps the greatest sports car driver of them all, Englishman Derek Bell, who remarkably never won Sebring. He won everything else, however, so he gets a pass when it comes to assessing his considerable legacy.

This year's inductees: the late Peter Gregg, Sebring winner in 1973 who with co-driver Hurley Haywood formed one of sports car racing's definitive partnerships; Bob Tullius, 1980 GTO class winner at Sebring who founded the famed Group 44 team that fielded Jaguar XJR GTPs in the 1980s; Vic Elford, Sebring champion in 1971; Wayne Taylor, who swept both the Rolex 24 At Daytona and the Twelve Hours of Sebring in 1996; and Brumos Racing, one of North American sports car racing's flagship — and legendary — organizations.

Robin Liddell and Andrew Davis co-drove a Chevrolet Camaro to the overall — and Grand Sport class — victory Friday in the production-based Continental Tire SportsCar Challenge race. The Street Tuner class was won by Randy Pobst and Andrew Carbonell in a Mazda MX-5.

The race was slowed by a late caution due to a hard crash by Marc Miller of Holland, Mich., who drives a Mazda MX-5 for CJ Wilson Racing. Following the incident, IMSA officials announced that Miller was awake and alert, but being transported to a local hospital for further evaluation.