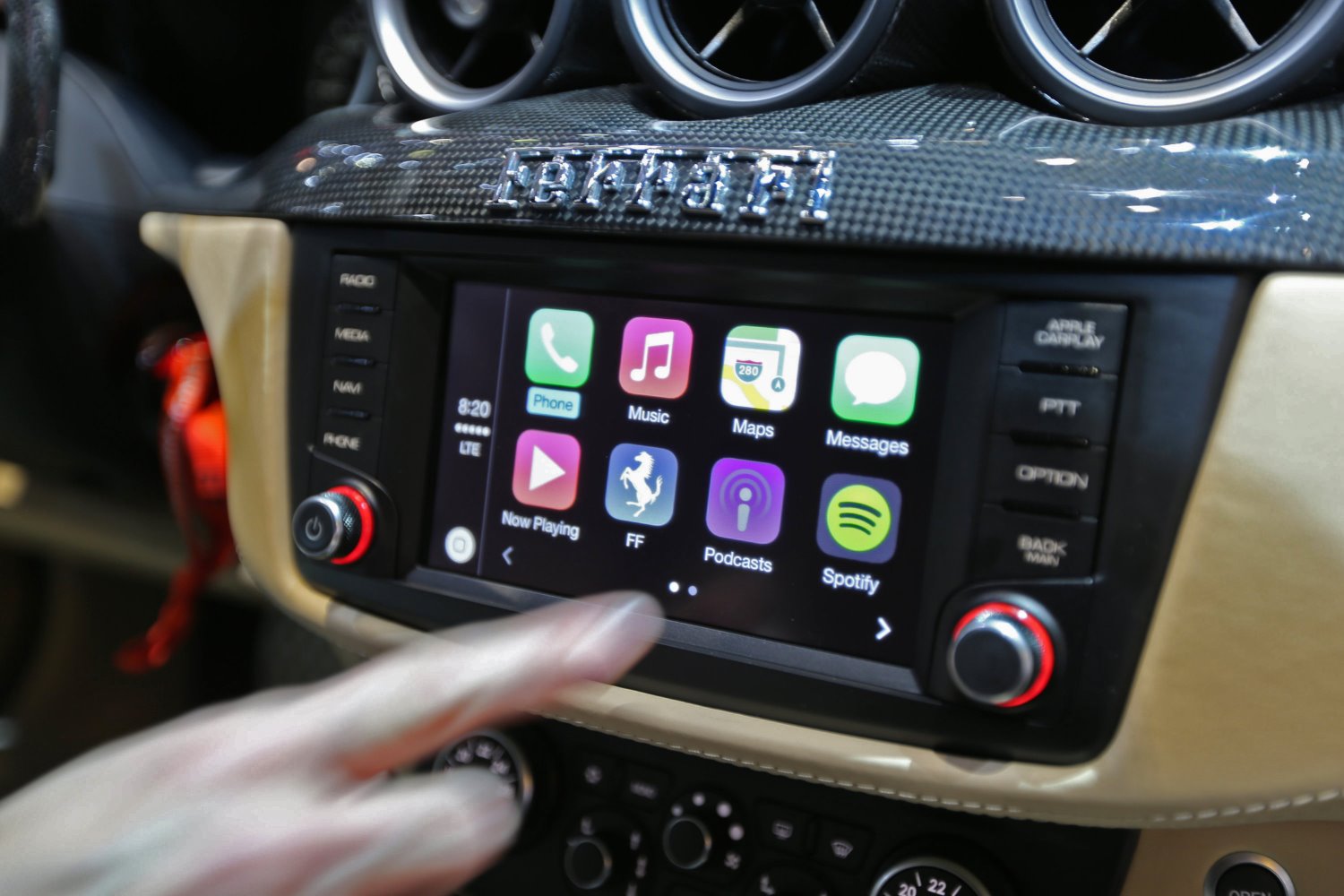 The Ferrari FF has debuted at the Geneva International Motor Show equipped with Apple CarPlay, the simplest, safest way of using your iPhone in the car. Ferrari chairman Luca Cordero di Montezemolo had this to say of the Prancing Horse’s partnership with the Cupertino company: "I am both proud and delighted to announce Ferrari’s collaboration with Apple on CarPlay. We are the first company in the world to offer its clients a car equipped with a system this advanced. It is the result of two years of working on absolutely the same wavelength with a young, extremely innovative company very much at the cutting-edge of technology."

Apple’s vice-president of iPhone and iOS Product Marketing Greg Joswiak also highlighted the extraordinary understanding that existed between the two companies as they collaborated on this innovative, technologically leading-edge project.

"Innovation and technology are essential elements where we are concerned and we found both in the way Apple operates," added Montezemolo.

"We will be doing more good work together in the near future, particularly on cars like the FF and also shortly on the California T which is not a competition model but a car you can get great pleasure from every day. A system like CarPlay, that allows you to safely use and enjoy your phone in the car and can also be controlled using just voice commands, has the innovative component that is so important to us. Being the first to develop this technology is a source of enormous satisfaction to us and proves yet again why Ferrari is a highly innovative, technologically pioneering company that commands such huge respect internationally." A perfect, synergic partnership between two great brands.

Ferrari comes to the 2014 Geneva International Motor Show with a unique combination of sportiness, exclusivity and versatility in the form of the elegantly-designed and highly innovative new California T, and a more versatile version of the revolutionary FF four-wheel-drive four-seater with boosted in-car comfort and integrated CarPlay Apple technology.

The California T continues a long and glorious Prancing Horse tradition begun in the 1950s, and boasts singular levels of innovation, most notably in its turbocharged V8, a completely new power unit that, in a world first, successfully combines the performance, torque and sound of a conventional Ferrari engine, with the additional benefit of the fuel efficiency afforded by turbocharging.

The new mid-front 8-cylinder car is exceptionally practical, thanks to its retractable hard top (RHT) and the signature 2+ concept which provides additional versatility for using the cabin space.

Alongside the California T is the FF which is presented at Geneva with new, more comfortably-designed and easily-accessible rear seats thanks to front seats that slide further forward.

From today, clients can also order the FF with CarPlay Apple, the smarter, safer and more fun way to use iPhone in the car. CarPlay provides iPhone users with an incredibly intuitive way to make calls, use maps, listen to music and access messages with just voice commands or by touch. Users can easily control CarPlay from the car’s native interface or just push-and-hold voice control button on the steering wheel to activate Siri without distraction.

A seamless blend of sportiness and elegance, the California T is powered by a direct-injection 3885cc V8 turbo engine that punches out a massive 560 cv at 7,500 rpm, yielding a specific power output of 145 cv/l, the highest in its category, as well as maximum torque of 755 Nm in 7th gear. Figures that allow the California T sprint from 0 to 100 km/h in just 3.6 seconds and deliver extraordinary acceleration – even in higher gears – and excellent fuel efficiency.

For the first time on an engine using this technology, turbo lag has been virtually eliminated by reducing inertia and adopting an F1-derived flat-plane crankshaft in addition to innovative twin-scroll turbines. Increasingly powerful pick-up is guaranteed by proprietary Variable Boost Management software which adjusts torque delivery to suit the gear selected, thereby also cutting fuel consumption.

As was the case in Formula 1, turbocharging was adopted out of a need to boost efficiency. Compared to the previous California, in fact, fuel consumption has been cut by 15 per cent* despite an increase of 70 cv in power output and a jump of 49 per cent in maximum torque in seventh gear. Emissions have been cut to 250 g/km on the combined cycle and by 20 per cent in the CO2/horsepower ratio (0.44 g/km/cv). As a direct consequence, the car’s range has been extended by 15 per cent.

Thanks to meticulous design and sophisticated production techniques adopted for essential components such as the flat-plane crankshaft and the three-piece cast exhaust manifold and turbo housing, the California T’s engine produces an enthrallingly powerful sound that becomes even more impressive as revs increase. This is a completely unprecedented achievement for a turbo engine.

The car also sports the latest evolution of F1-Trac, which guarantees maximum acceleration out of corners, and CCM3 carbon-ceramic brakes – with new composite discs and pads – integrated with the ESP 8.0 Premium system, which controls the high-performance ABS to deliver extremely short stopping distances (100 to 0 km/h in just 34 meters).

The combination of the California T’s uncompromising architecture, dynamic controls and new engine guarantees consistent fun behind the wheel both in challenging and more relaxed driving conditions, in perfect Grand Tourer style.

The Ferrari Styling Centre, in collaboration with Pininfarina, radically reworked the California T’s design to endow it with a completely new personality whilst still retaining its original dimensions. Its flanks are an homage to the 250 Testa Rossa's famous pontoon-fender styling, with the front wing line stretching back towards the compact, muscular rear and bringing an aerodynamic sleekness and movement to the sides. The rear benefits from meticulous aerodynamic research resulting in a new triple-fence diffuser.

The air vents in the bonnet boost the efficiency of the front radiator, helping reduce its overall dimensions, while the lower section of the front bumper has been profiled to channel air to the intercoolers.

The warm, sumptuously hand-finished cabin is trimmed in luxury semi-aniline leather. The space on-board is flexible too, and owners can make the most efficient use of its generous boot capacity even with the top down, thanks to the communication between the luggage compartment and rear seats.

Continuing the theme of versatility, at Geneva, three new configuration options for the FF are being presented in the exclusive Tailor Made personalization program, which is available to clients desiring a completely bespoke car.

The three configurations (Ski, Golf and Country) avail of tough, waterproof technical materials with functional and design details inspired by each specific area of use. Ski, for instance, includes a luggage compartment lined in anti-scratch carbon-fiber with metal inserts, while the Golf configuration is trimmed in the classic tartan that is widely used in the sport. Country, on the other hand, is designed for outdoor and country activities, and so the focus is on warm leather tones with the luggage compartment entirely lined in the same Testa di Moro leather used to trim the cabin.

Aside from the California T, which is on show in Rosso California, Blu California and Bianco liveries, the Ferrari stand also plays host to an F12berlinetta, the most powerful mid-front V12 in the range, in black with a beige interior, and, in a Rosso Corsa livery with a leather-trimmed cabin, a 458 Spider, the spearhead model for a whole new generation of drop-tops combining the RHT with a mid-rear engine. Also on show are two Grigio Silverstone-liveried FFs featuring the Apple system, Sabbia interior and full-length glass roof, the car in the Tailor Made area sporting the Ski configuration.