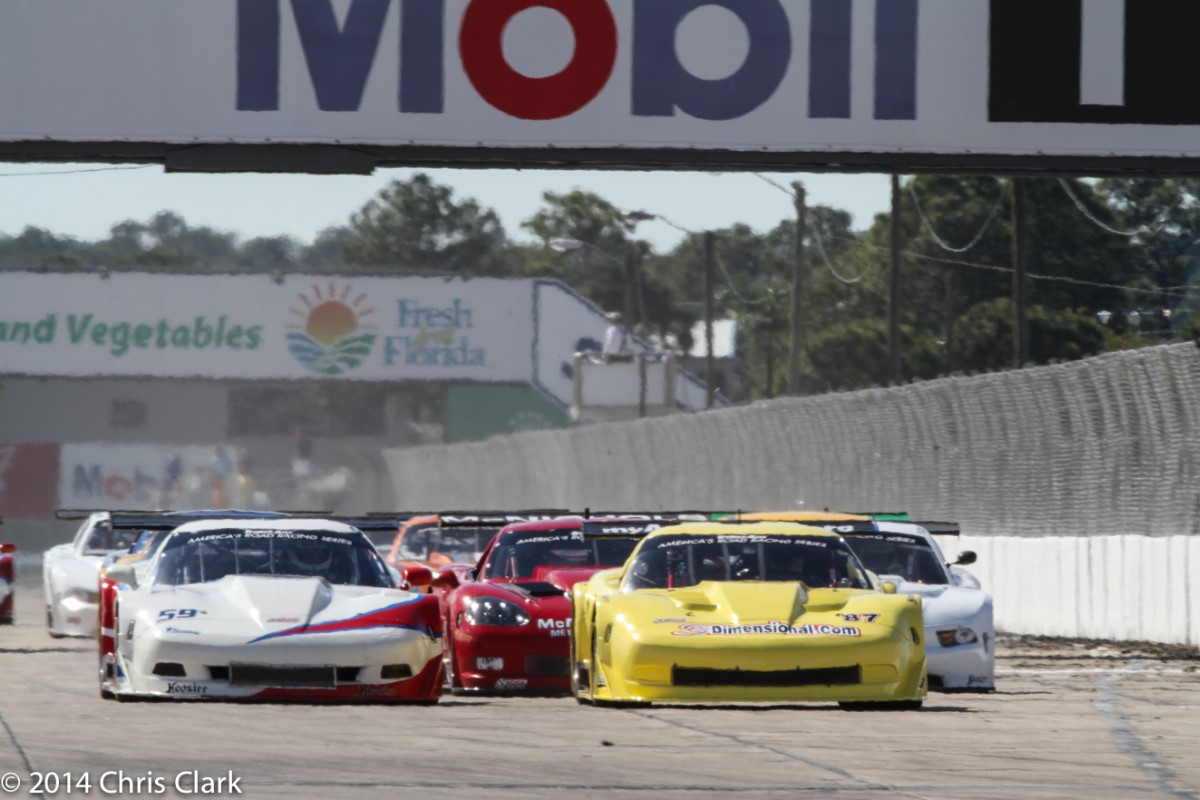 Doug Peterson and Cameron Lawrence ended 2013 on top as TA and TA2 Champions, and they began 2014 in the same fashion—with victories at The Earwood Classic, Round 1 of the 2014 Trans Am Championship.

The race began with 49 cars on grid, the highest since 1983, at Road America, as Trans Am legend Bob Tullius gave the drivers start. Peterson began on pole in the #87 3Dimensional.com Chevrolet Corvette and shot out ahead of the pack during the first lap of the race. However, his lead dwindled as the course immediately went under a double yellow as the #72 Performance Driving Group/S.C.D.W. Ford Mustang of Michael Defontes caught on flame, the result of a ruptured fuel cell.

The race stayed under yellow for a total of three laps while safety crews dealt with the flame. After the restart Peterson once again jumped out to an early lead, but was tailed closely by the #23 McNichols Chevrolet Corvette of Amy Ruman. Ruman tailed Peterson closely, but Peterson slowly and steadily built up a lead.

Meanwhile Cliff Ebben in the #36 Stumpf Ford/ McMahon Group Ford Mustang edged in on Ruman, matching her move for move. After several attempts to pass the #23 car, Ebben finally made his move with seven laps remaining, overtaking Ruman for second position. The three leaders remained in that order for what remained of the race, with Peterson and Ebben continuing to build their respective gaps.

“We’ve got a lot of power with the pro motor guys, and all of the fellas at Tony Ave Racing know how to set up a car," said Peterson. “We made change after change after change this weekend—and I’m sure we’re going to have to make more changes next weekend—but we had the power and ran well, and I was patient. We had a good pace, and we ran that the entire time. It’s a great way to start the year."

Following the three front runners were John Baucom, in the #86 Baucom Motorsport/ Roadraceparts.com Ford Mustang and Simon Gregg, in the #59 Derhaag Motorsports Chevrolet Corvette, who rounded out the top five.

In TA2, defending Champion Cameron Lawrence, in the #1 Trick Titanium Chevrolet Camaro, started on pole and never relinquished his position—powering the Miller Racing Machine forward while building up an impressive gap.

Early in the race Adam Andretti, in the #44 Engineered Components Chevrolet Camaro, followed Lawrence closely but slowly began to lose ground until ultimately retiring due to transmission failure.

In the #25 Mike Cope Racing Chevrolet Camaro, Ron Keith, making his first ever Trans Am appearance, worked his way up through the TA2 field, after starting fifth. As Andretti pulled into the pits, Keith assumed the second place position, a spot he would defend against eventual third place finisher, and 2013 Rookie of the Year, Tom West, in the #56 Limrick Machine/ Treelaine Consulting Chevrolet Camaro. All three, Lawrence, Keith and West, would cross the line in that order.

“Miller Racing gave me a great car," said Lawrence. “They worked hard after a few mishaps in practice and improved the front end tremendously. It’s a great feeling to come out on top, especially with all the competition and cars we have out on the track. It’s always exciting to be racing with multiple classes on track; you have cars passing you and you’re constantly trying to pass cars. It’s what makes multi-class racing fun."

The recent growth in the TA3 class, Trans Am’s production-based class, resulted in a multitude of rookies placing on the podium and some of the best racing the TA3 class has ever seen. In total the TA3 American Muscle Group experienced six lead changes and was highlighted by the battle between Ernie Francis, Jr., in the #9 Breathless Performance Chevrolet Camaro, and Dean Martin, in the #52 Rehagen Racing Ford Mustang. The two battled back and forth for the lead throughout the race and crossed the line, side-by-side, with Martin just barely edging out Francis for the top place in the group and the TA3 American Muscle track record, a 2:16.180

Todd Napieralski, in the #39 Temec/SKF/ Backstreet Performance, Chevrolet Performance Camaro, finished third for the American Muscle Group while Russ Snow, in the #20 Carbotech Chevrolet Corvette and Mark Klenin, in the #62 Breathless Performance Aston Martin GT4, placed second and third in the International Group.

Trans Am will now head further south to Homestead-Miami for Round 2 of the 2014 Trans Am Championship on Sunday March 9th.