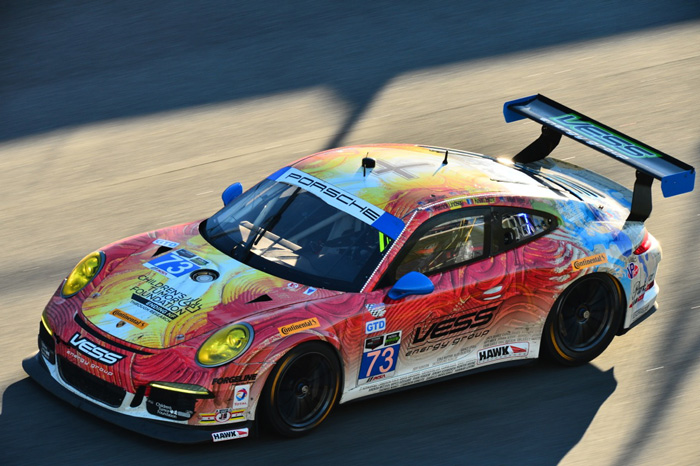 Following a two-day test at the infamous Sebring International Raceway in advance of the 62nd Annual Mobil 1 Twelve Hours of Sebring, Park Place Motorsports emerged on top of the time sheets among GTD competitors in the IMSA TUDOR United Sports Car Championship.

"We're definitely headed to the race with a lot of confidence," stated Patrick Lindsey, co-owner of Park Place Motorsports. "Walking away at the top of the time sheets in such a competitive field is a huge boost of confidence for us, and it's what we needed as we prepare. Kevin and Connor did an excellent job in the 73 car, and it was great to see Dr. Jim, Craig, and Norbert make progress with the 71. Our team is looking very strong."

Driving the No. 73 Park Place Motorsports Porsche 911 GT America, drivers Patrick Lindsey, Kevin Estre, and Connor De Phillippi threatened near the top of the time sheets for the entirety of the two-day test. Finishing in the top-10 in three of the four sessions, Kevin Estre's time of 2:04.289 proved the fastest of the week among GTD competitors, showing the overall strength of the California-based team.

In addition to overall pace, the team experienced no major technical hiccups, rounding out a fairly perfect week.

"We walked away from our latest Sebring test knowing it was very informative and successful for all of our drivers and crew," stated John Horton, chief engineer and co-principal. "I have to give our crew chief, Gary Biehl, a lot of credit for our preparation coming in. During the last few weeks, Gary has really led the charge on some development work I wanted carried out, and the work of the whole crew has materialized in to what we experienced last week. We came in to test several items, including brake friction, damping, and a variety of chassis matters. Unloading with two very different setups on our cars, it proved invaluable as we took the best information from both. All of the guys on the team have been working really hard to get the most out of the car, and it's good to finally see the fruit of our labor."

Also proving solid was the No. 71 Vitamin-D Pro Porsche 911 GT America of Dr. Jim Norman, Craig Stanton, and Norbert Siedler. With an emphasis on seat time and consistency, the trio also took top-10 honors in two of the four sessions, with a fastest time of 2:05.527.

With the 71 also showing well, the team experienced zero significant technical issues, and simply stuck to their plan of cycling all three drivers through the car in search of the elusive perfect setup.

"Our test was about learning everything we could with this car at Sebring," stated Dr. Norman, hailing from Tampa. "We've made a lot of progress, and we'll just have to wait until the race to see where everyone's pace really is. They say there's no sandbagging allowed in this series, but I have a feeling there might be a few teams out there who miraculously find something during the race."

With practice for the 62nd Annual Mobil 1 Twelve Hours of Sebring just three weeks away, the entire Park Place organization will be hard at work as they prepare for the round-the-clock endurance event. The race will take place on Saturday, March 15, with coverage plans to be announced shortly by IMSA.