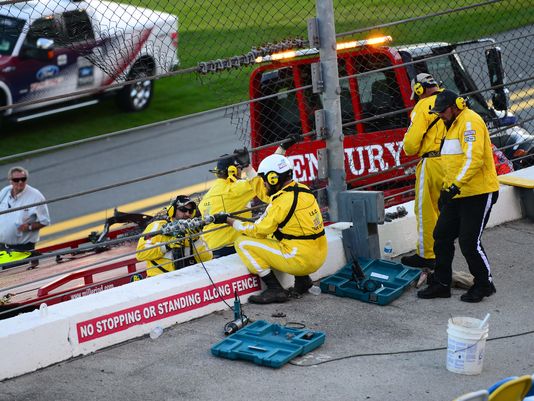 A seven-car accident in Sprint Cup practice pierced a hole in the grandstand fence at Daytona International Speedway on Wednesday. During Wednesday's first practice session, #20-Matt Kenseth appeared to spark a wreck that sent Parker Kligerman's #30 Toyota on top of Paul Menard's #27 Chevy and then along the SAFER barrier, where it tore a hole in the fence that forced the cancellation of the rest of the practice. A Daytona spokesman said the fence "performed the way it was designed to," but one steel cable and some mesh fencing would be replaced. The track has received no reports of injuries. Joey Logano blamed Kenseth for drifting up the track into the nose of his #22 Ford on Wednesday as he tried to exploit a gap. "Maybe I shouldn't have been racing as hard as I was there in practice, but everybody was in a big pack there trying to make things happen," Logano said.

"As soon as he came back up I checked up a little bit and then the [Trevor Bayne] hit me from behind and we spun out. It happens. That's Daytona for you." Kenseth said Logano got too close and moved him and was spun once he corrected the car. Kligerman blamed Logano for being overly aggressive. "It's a shame. He's supposed to be a veteran," said Kligerman, a rookie. "You go up to the Sprint Cup Series and it's supposed to be the best of the best. You've got a guy in practice who's racing people like it's the end of the Daytona 500. Meanwhile, I came out of truck practice, and we were running 3 or 4 wide no problem. I don't quite understand that one. I'll have to talk him about that. I'm pretty upset about how that all went down."(ESPN), also involved in the wreck were #77-Dave Blaney and #83-Ryan Truex. The teams of #22-Logano, #27-Menard, #30-Klingerman and #83-Truex pulled out backup cars for the Budweiser Duel 150 qualifying races. #77-Blaney's team didn't have a backup car and no idea if the team will be able to fix the car or secure a car from another team to run the Budweiser Duel.

AND Four laps into the afternoon practice session, Cole Whitt scraped the outside wall after a piece of debris punctured the nose of his #26 Swan Racing Toyota. In an attempt to avoid Whitt's car, #55-Brian Vickers collected #13-Casey Mears' Chevrolet and shot nose-first into the outside wall. The impact sent parts and pieces flying, and one of the square cowl flaps from Vickers' Camry lodged edge-first into the nose and hood of Jeff Gordon's #24 Chevy. From the first wreck, Vickers went to a backup, but the teams of Whitt and Mears opted to repair their cars. Swan Racing teammates Whitt and Kligerman had but one backup car between them. NASCAR Wire Service