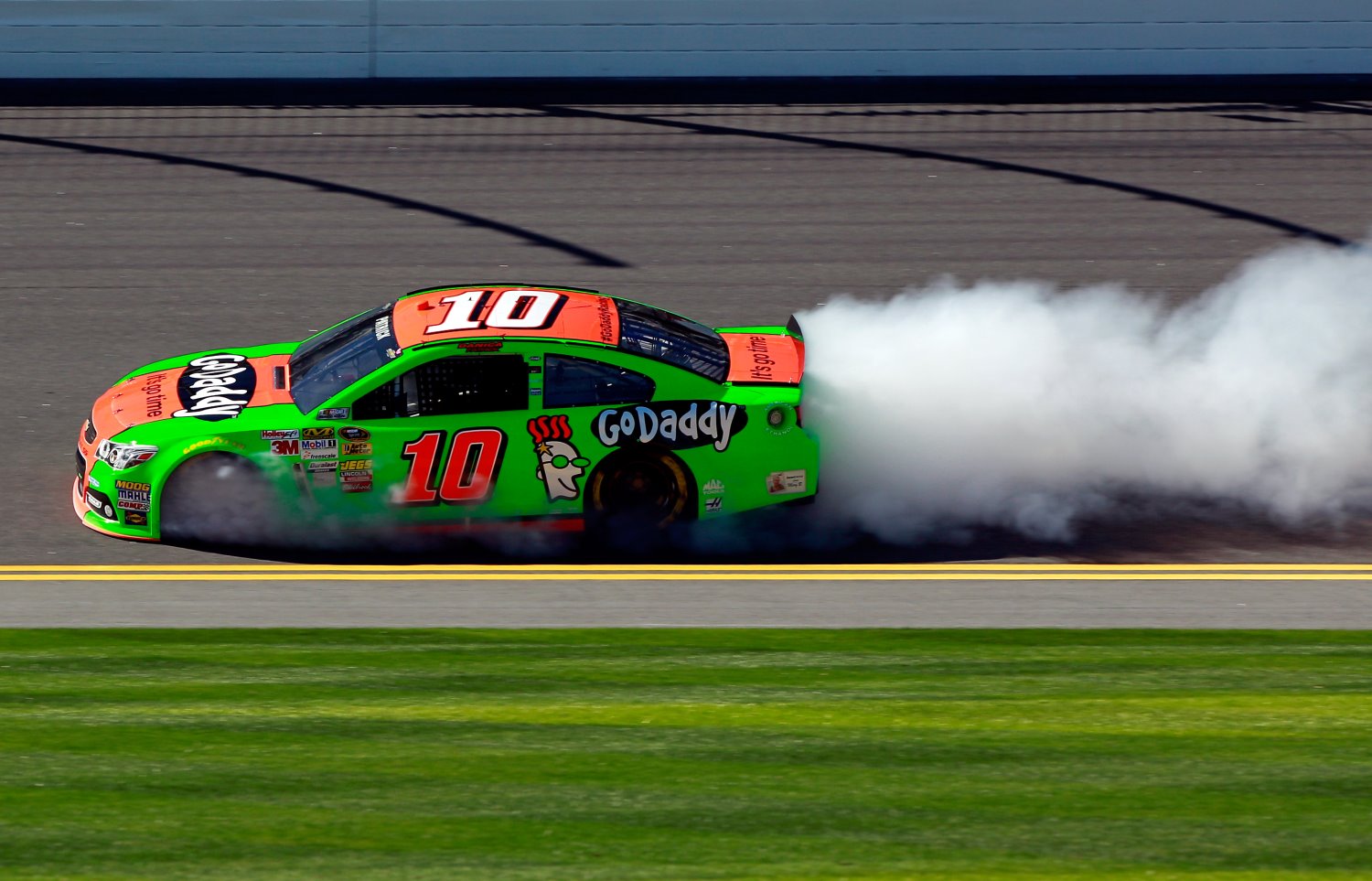 WHAT DID YOU FEEL INSIDE THE NO. 14 WHEN THE ENGINE EXPIRED?
“Just something in the bottom end broke. It happened all at once. I was talking to Scottie Maxim (director of track support at Hendrick Motorsports) one of the head engine guys at Hendrick and went over everything. It’s a good thing about having the telemetry with the motor side is you can see what goes on, what’s happening, but it wasn’t anything that we knew with some warning. It just happened all at once. The good thing is we have a lot of depth at Hendrick and the motor they will put in for tomorrow will be just as good as this one."

AFTER CONVERSATIONS WITH SCOTT MAXIM, IS THERE ANY CONCERN WHATSOEVER AFTER THOSE TWO ENGINE FAILURES?
“Not that I’m aware of. We basically just went over what happened. He said the one that is coming down, our back-up motor here; it’s just as good as this one. Not really concerned about it. We only have to make a small run tomorrow. I’m pretty confident we will be fine."

DO YOU ALMOST HAVE TO TAKE THE ATTITUDE THAT BETTER NOW AND LET’S GET THIS THING GOING AGAIN?
“It’s just a motor. If it was getting ready for the race you would be a little more concerned. It’s just for qualifying. They pay the big check a week from tomorrow, not tomorrow."

WHAT DID YOU FEEL?
“It broke a motor. Just a vibration. That is what happens when they break. It’s nothing fancy it just vibrates. As soon as it breaks apart it throws all the weight off and that is what makes it vibrate."

HOW WAS YOUR PRACTICE TODAY?
“Typical (Daytona) 500 practice. Yesterday was a little more fun, today definitely feels like being back at work today. Single car runs aren’t very fun for the drivers but it’s a necessary evil here."

MORE TIME IN THE CAR AND STILL ZERO PAIN?
“Yep, still feel good. We have all afternoon now to rest and get ready for tonight and go at it."

TONY GIBSON, CREW CHIEF, NO. 10 GODADDY CHEVROLET SS: CONCERNING THE ENGINE FAILURE EXPERIENCED BY THE NO. 10 CHEVROLET SS:
“Several times you will see two and three of them (engines) at the same time blow up. When you get into qualifying trim, you are asking these things to do a lot. They have to run hot and a lot of RPM’s and a lot of crazy stuff. We will work it out."

DANICA PATRICK, NO. 10 GODADDY CHEVROLET SS: REGARDING LOSING AN ENGINE DURING THE FIRST PRACTICE SESSION FOR THE DAYTONA 500:
“I’m sure they are going to dig deeper. Hendrick is great support for us. I sat on the front row last year. I sat on the pole. I’m sure we will get it together and it’s better it happens; I mean I only had a few hundred yards to go before the start/finish and then I would have shut it off. So I said man I guess I’m glad it did it then as opposed to being five seconds away from blowing up because that would have been tomorrow. We will get our arms wrapped around it. We will figure out what we can, but more importantly just get the next engine in and get going. I said, ‘Can I still start on the front row?’ And they said, ‘Yeah, but you have to start at the back for the Duels.’"

IS THREE ENGINE FAILURES A CONCERN AT ALL FOR YOU?
“Sure, yeah, it was a concern when I saw Tony (Stewart) blow up and then I did. I was like man are we doing something but it doesn’t seem to necessarily be specific to our team I guess. But it’s something that we are doing in our family here and we need to figure it out. I was saying I bet other Hendrick cars are thinking ‘what’s going on’ so we have got time to hopefully figure it out. Definitely figure it out before the race."

BETTER FIND THIS OUT NOW. IS THAT THE KING OF ATTITUDE YOU HAVE TO TAKE?
“That is the only way to look at it at this point in time. It’s definitely a departure from where

we were last year when we unloaded and were very quick and really we made one run in each practice and everything was perfect. This is different, but it’s a different year and that’s what happens. That is why when y’all ask what you expect for the year you have to really get into the year to start to set expectation levels because this is very different than the last time. I don’t doubt everybody in their effort and their ability to fix it, so yeah, the bright side is that it didn’t happen on qualifying it happened before and we will get something else in there and we will do our very best."

SCOTT MAXIM, DIRECTOR OF ENGINE TRACK SUPPORT AT HENDRICK MOTORSPORTS: REGARDING THE THREE ENGINE FAILURES FOR HENDRICK MOTORSPORTS DURING THE FIRST DAYTONA 500 PRACTICE SESSION:
“Data that we have been able to look at would suggest that it’s something in the bottom end of the engine. Really, until we get the engines further apart to be able to more closely analyze them, I really couldn’t see anything anymore than that right now."

WHAT LEVEL OF CONCERN DO YOU HAVE GOING FORWARD?
“Moving forward, we will be alright. We will identify what we’ve got and we will make changes needed and I think that we will be able to make corrective action. Certainly as well for tomorrow, we will be able to look the engines over closely and make sure that we are not going into tomorrow with an issue. Then after that, we will be all good."

DOUG DUCHARDT, GENERAL MANAGER AT HENDRICK MOTORSPORTS: WE SAW THREE HENDRICK ENGINE FAILURES IS THERE SOMETHING ACROSS THE BOARD YOU ARE TRYING TO DO THERE? WHAT SEEMS TO BE THE PROBLEM?
“Across the board we are trying to do the best we can for qualifying tomorrow for those two laps. We’ve worked through that process. Obviously we have been pushing the limit and we found the limit there. We feel like we understand what is happening. We will get the engines back over and tear them down from NASCAR. I think we will be able to confirm everything that is happening. The drivers have been consistent they feel like it has been something in the bottom end of the engine. We think we understand what is happening there and we will take a look at that. For tonight and for the rest of the week when we go to race we don’t have any concerns with the Sprint Unlimited or as we get into the twins or the (Daytona) 500."

DO YOU THINK IT IS A COMPONENT?
“Well I think it is just part of us trying to maximize two laps for tomorrow. So it’s not a specific component issue. It’s just how we go about trying to minimize going around the track for qualifying."

WE SAW JAMIE MCMURRAY ABORT HIS RUN COMING DOWN PIT ROAD. IS THAT YOUR CALL FROM HENDRICK ENGINES OR IS THAT THE TEAMS CALL?
“Once we saw some things that were happening and saw some data we knew they were on pit road getting to run again. They had started a run when Tony (Stewart) had an issue. So we wanted to get them back in take some time, look at that data, understand where they were at and make a decision. I don’t think they had enough time to get back out. That is why we did that we didn’t want to we just didn’t want to have another issue. We wanted to be on the safe side with that. So we called Keith (Rodden) and Keith understands he has worked with us before when he was with the 5 car last year so he understands how we work and go about things so that was pretty easy."