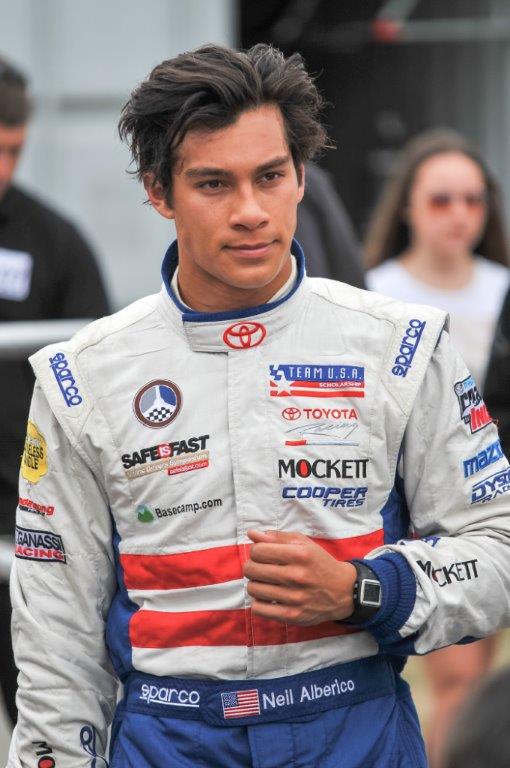 Feilding, New Zealand – Team USA Scholarship winner Neil Alberico hasn’t enjoyed as much success as he had wished for over the past five weeks in New Zealand, but he kept his head down and emerged with a projected top-10 ranking after the 15 races which comprised an intensely competitive Toyota Racing Series season.

Alberico’s preparations for the 59th New Zealand Grand Prix at Manfeild Autocourse did not begin well. He missed one of the Thursday test sessions due to a broken engine mount and another on Friday due to an alternator failure.

Thankfully, there was some good news when Alberico learned his appeal against a penalty in Race 2 at Timaru had been overturned, resulting in a fifth-place finish. The 21-year-old Californian hoped to carry forward that momentum into qualifying, which was held on a wet track following overnight rain, only for handling difficulties to restrict him to 18th on the grid for Race 1 and 21st for the prestigious Grand Prix headline event.

Conditions were dry again for Race 1, for the Dan Higgins Memorial Trophy, although the start was delayed twice due to cars stalling on the grid, causing it to be cut from 20 laps to 17. Alberico was eventually classified 14th, which also determined his starting position for Race 2 on Sunday morning. This time a messy race punctuated by cautions, no fewer than two red flags and a variety of penalties for driving infractions ended with Alberico in 11th.

A couple of full-course cautions also punctuated the opening stages of the 35-lap Grand Prix. A mistake on Lap 12 cost Alberico some positions, but a strong second restart saw him making progress through the midfield until his rear wing was dislodged following a hard hit from behind.

“I was able to continue for a lap or so with the damaged rear wing," he related. “Then another Safety Car came out for another crash and I was given the black flag to come into the pits to have my rear wing changed."

Alberico resumed three laps in arrears and eventually crossed the line in 14th.

Local driver Nick Cassidy took the New Zealand Grand Prix spoils. Dutchman Steijn Schothorst and Singapore’s Andrew Tang shared the other wins, with Tang clinching the title by a narrow margin over Briton Jann Mardenborough. Following the annulment of his Timaru penalty, Alberico expects to be classified 10th in the final standings.

“The past five weeks of the Toyota Racing Series have been incredibly intense and a wonderful learning experience," said Alberico. “Thanks to all the supporters of the Team USA Scholarship for making this opportunity possible again. Also, thanks to all the boys at Victory Racing New Zealand for their massive effort this past month."