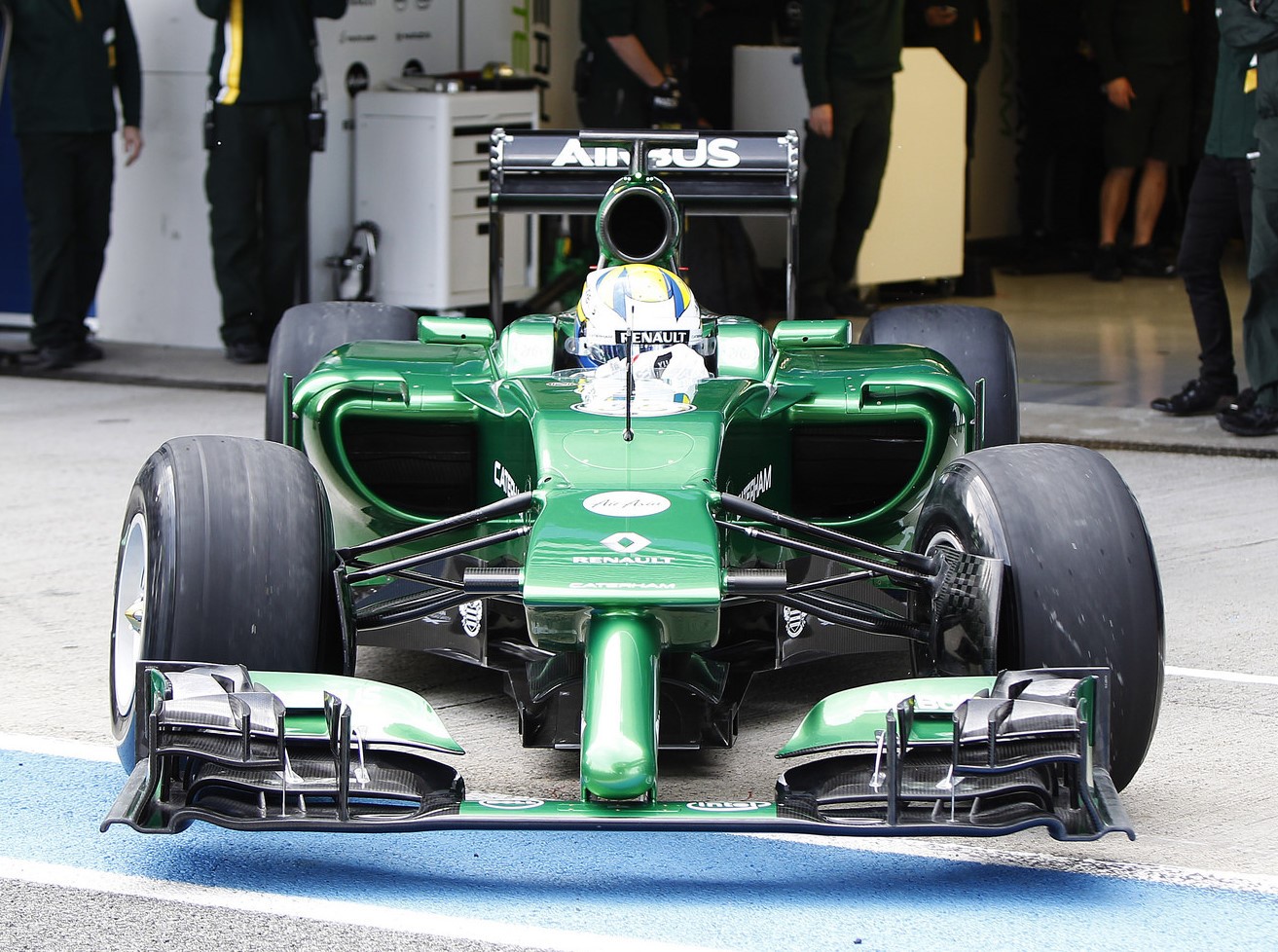 Ross Brawn announces retirement
(GMM) Despite earlier saying he would consider his F1 future during a sabbatical, Ross Brawn now insists he has definitively retired.

Having stepped down as Mercedes' team boss, the famous 59-year-old has been heavily linked with McLaren and the great British team's 2015 engine supplier Honda.

But despite saying earlier he would contemplate returning to the paddock this year whilst spending time fishing, Brawn announced at the weekend that he has in fact decided to retire.

"What they didn't realize when I was invited here was they had a scoop because the world's press was trying to find out if I was retiring or not," he said at a fishing event in Scotland.

"This is the busiest time of the year for formula one and I said I would come along and open the River Dee.

"If they had put two and two together they would have realized I was definitely retiring," Brawn added.

"I'm retiring — it's not tongue in cheek," he insisted.

"I'm going to take a year to enjoy the fishing and then see what life brings. I'm looking forward to it but I've got no other plans."

At his former employer, Mercedes said it will not be filling the position of team principal in Brawn's absence.

"Yes, that position is a thing of the past," the Brackley team's Toto Wolff told the official F1 website.

"Technical (issues) is Paddy, but if I don't like the color of the race car I go to Toto!" he joked.

Elsewhere, it is rumored Lotus is preparing to confirm ousted McLaren boss Martin Whitmarsh as its new team principal, with an announcement possible before the forthcoming Bahrain test.

It is also emerging from Woking based McLaren, where former Lotus boss Eric Boullier is now 'racing director', that aerodynamic chief Marcin Budkowski is leaving, according to Italy's Italiaracing.

The report said McLaren reported "differences regarding future development", although more likely is that Budkowski has paid the price for the disastrous 2013 car.

FIA delays nose dispute until 2015
(GMM) The unseemly nose designs up and down the 2014 pitlane have been declared legal by the FIA.

We reported last week that a row over the radical noses was shaping up, with one camp of teams pointing the finger at the other, and the governing FIA unhappy with both.

But despite the questions about the safety and legality of the solutions that were also near-universally declared 'ugly', Germany's Sport Bild cited FIA sources in reporting that the governing body has shelved the issue for 2014.

"The FIA intends to clarify the rules for 2015," the report added.

Much has been said about the various 'gentleman's appendage' solutions seen throughout the pitlane, with perhaps the least attractive being the shovel-like Caterham.

The team's new 2014 driver, F1 returnee Kamui Kobayashi, however, said: "It may not look very good but it feels good, especially because as the driver I cannot see the nose!"

Lotus, Marussia pay 2014 entry fees – reports
(GMM) Lotus and Marussia have ended doubts about their official participation in the 2014 championship.

When the governing FIA released the 2014 entry list last month, the two teams' entries were listed as "subject to confirmation".

It subsequently emerged that the teams – competitive but financially struggling Lotus, and the small-budget backmarker Marussia – had been late in paying the higher FIA entry fees.

But France's Auto Hebdo, and other international reports, now insist both teams "have paid" the fees to the Paris federation and are entitled to race in 2014.

Other reports said the FIA has confirmed the news.

Massa 'would be worried' in Red Bull boots
(GMM) According to one cruel joke in the Jerez paddock last week, the Red Bull RB10 has a cryptic, phonetic meaning — 'Red Bull Are Bea-ten'.

It follows a disastrous opening test for the reigning four-time world champions, where even the late-to-arrive backmarker Marussia actually collected more mileage.

Italy's Autosprint published a table of mileage after the first winter test of the pre-season, and it makes worrying reading for the Milton Keynes team.

Direct rivals like Ferrari's Fernando Alonso, however, spent no time gloating over the Red Bull crisis.

"There are always some problems that are public, or less obvious, sometimes more, sometimes less," he told Spanish reporters at Jerez.

"Only in Australia are there the first points; this is the first test," Alonso insisted.

Williams' Felipe Massa, however, admitted that if he was in Sebastian Vettel or Daniel Ricciardo's racing boots, "I would be worried".

"At least they are having some problems this time and are not two seconds faster than the others, as they were in some places last year," the Brazilian is quoted by Totalrace.

Indeed, in a worrying sign of the severity of the problem, Renault's deputy managing director Rob White admitted the cause is "not straightforward" or even fully understood.

"There isn't a single component or system that has caused particular trouble," he admitted.

"The next stage is to identify the root causes for the problems we experienced, to develop the solutions to strengthen our validation process so we can be more confident to tackle Bahrain in a more normal way," he said in a media statement.

Perhaps even more worrying is that the FIA's deadline for initially 'freezing' the specification of the power unit – the end of February – is fast approaching.

Alonso, however, tipped Red Bull and Renault to be ready.

"If this (the events of Jerez) had happened in Australia, it would be more decisive," he is quoted by Italy's La Gazzetta dello Sport.

"But there is still two months, and Red Bull still has the time to do the kilometers that we (Ferrari) have done, and what Mercedes has done.

"I think more than ever this year, we will have to wait for the races to get an idea of where everybody is."

Melbourne in 'tough' talks over F1 future
(GMM) There is still no news about the future of Melbourne's Australian grand prix beyond the 2015 race.

That is the admission of race chairman Ron Walker, who said the state-sponsored organizers are still in negotiations about a new contract with the sport.

"I'm as confident … as I can be," he is quoted by the local Age newspaper.

It is believed the Victorian government is pushing Bernie Ecclestone to reduce Melbourne's annual fee, as he has done with some other races, but
Walker said the disputed issues are in fact "nothing serious".

But Victorian premier Danis Napthine said his government is actually playing "a very tough game" in the talks with Ecclestone.

"It's a work in progress," Walker insisted. "It's just taken longer than we thought. I hope the impasse will be resolved soon. Hopefully, it will be concluded before this year's race."

F1 race contracts are typically of a long duration, such as seven years or more, but Walker said Melbourne's new deal could be for just "two years".

He said that would "suit the government, because they are not committing themselves to a long term".

In an outburst last week against the sport he heads, F1 chief executive Ecclestone said the farcical events of the opening test at Jerez proved his fears about the energy recovery-powered V6 era were founded.

He even dismissed the argument that F1's new regulations save fuel, insisting: "Mercedes are taking 23 trucks with them everywhere. If they really wanted to save fuel they should stop that".

Former triple world champion Lauda, now the chairman of the Mercedes team, hit back at Ecclestone's comments in the German newspaper Bild.

"I don't understand what Bernie said," the great Austrian started.

"The decision to go with the new engines was taken jointly, by everybody, five years ago. To criticize now makes no sense," said Lauda.

Maranello marque Ferrari replaced the long-serving Brazilian with Finn Raikkonen, its 2007 world champion, over the winter, with Massa having to move to the once-great British team Williams.

Ferrari justified the move on the basis that Massa couldn't support teammate Fernando Alonso's title-charging points hauls on a regular enough basis, but the 32-year-old thinks Raikkonen will also struggle alongside the Spaniard.

Having tipped Alonso to beat Raikkonen while talking to the Italian press at Jerez, Massa explained: "Because he's very intelligent and has already grasped the new rules.

"He (Alonso) knows what he needs to do to be fast from the beginning," he is quoted by Speed Week. "He combines talent with brains.

"He really is clever, and that is what you need for rule changes as drastic as these," added Massa.

However, Massa said Raikkonen cannot be completely ruled out.

"Maybe the new Ferrari will be better suited to Kimi's driving style," he admitted. "We'll find out."

There have also been doubts about whether Alonso, formerly the clear number 1 alongside Massa, will be able to work harmoniously alongside Raikkonen, the last Ferrari champion.

But team boss Stefano Domenicali said he was "very pleased to see" how harmoniously the pair had worked together at the Jerez test last week.

Alonso also revealed that he spent some days at Maranello with Ferrari's returnee recently.

"We had some fun evenings," he is quoted by Italy's La Gazzetta dello Sport.

"There will be a total sharing of data between us, which is what we are used to at Ferrari," Alonso insisted.

"Every day I had every lap of telemetry from Kimi, and he will also have mine. And what I'm trying here at Jerez, he will try in Bahrain," he added last week.

Frijns not planning to race in 2014
Caterham's new Formula 1 reserve driver Robin Frijns will not seek a race seat in any other category in 2014 and will focus entirely on his F1 duties.

Frijns, the 2012 Formula Renault 3.5 champion, contested a partial GP2 season with Hilmer last year. He was a Sauber F1 reserve in 2013, but his only running came in the Silverstone young driver test, whereas his Caterham program will include some Friday practice outings.

Asked if he would race anywhere else this year, Frijns replied: "I'm concentrating fully on my test role for Caterham. So I will do a few FP1s and try to help the team as much as I can."

Caterham has signed Alexander Rossi, who will share F1 test/reserve duties with Frijns, and Rio Haryanto for its GP2 arm this year.

Frijns made his Caterham F1 debut in testing at Jerez on Thursday, but did not manage a flying lap due to the electronics problems the team and engine supplier Renault struggled with all week.

"You're not enjoying a day when you're driving 60km, but I enjoyed my day with the team," he said. "I had some fun even though there wasn't a lot of running. They worked hard." Racer.com