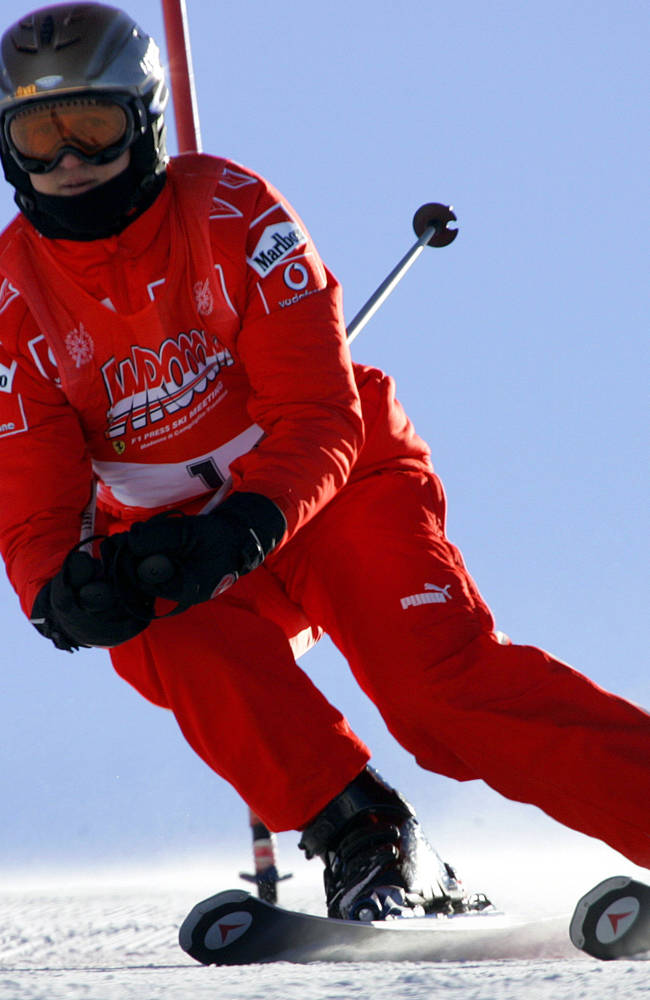 Formula One ace Michael Schumacher's stay in intensive care reaches the one month mark on Wednesday with the legendary driver still in a medically-induced coma whose outcome remains unclear.

After his December 29 fall at Meribel ski resort in the French Alps, Schumacher was sedated and his body temperature cooled to around 35 degrees Celsius (95 degrees Fahrenheit) to ease the risk of further damage to the brain.

Surgeons at Grenoble University Hospital say they decided on the coma after operating on bleeding and bruising in his brain.

They carried out a post-operative scan that revealed "widespread lesions" on both sides of the brain.

A second operation, to treat bleeding, took place on December 30.

There has been no update on his condition since January 17, when his spokesman Sabine Kehm, said he was still "stable" and that his family had complete trust in his treatment.

Four-time Formula One champion Sebastian Vettel said Tuesday he was hoping for a "miracle and he can be the same guy he was before."

"We still don't know what shape he will be in when he wakes up, which is awful for his family and friends," Vettel told reporters in Jerez in southern Spain.

And Niki Lauda, a three-time F1 world champion, added: "Michael, every day I follow your improvements and every day I am close to you. I hope I can speak to you very, very soon!"

Medical experts underlined how complicated cases like Schumacher's can be.

"A blow to the head causes bruising, a swelling, which takes place in a confined space, the skull, which leads to pressure on the brain," said Gerard Audibert, a professor of neurosurgery at the University Hospital Centre in Nancy, eastern France.

"One way to control it is to ensure that the patient and the brain are at rest and to control his ventilation, using an artificial respirator to oxygenate his brain.

"It's quite rare" for a coma to be induced for more than three weeks."

Artificial comas "can last a long time, days or weeks," said Professor Jean Mantz, in charge of anesthesia at the intensive care unit at Bichat-Beaujon-Louis Mourier Hospital in Paris.

Once pressure within the skull has stabilized at a normal level, sedation levels are scaled back and the patient returns to consciousness, but "it's not unexceptional for a patient not to revive," said Audibert.

"There are all sorts of ways of testing the patient for responses, but nothing replaces physical contact," said Bernard Vigue of the University Hospital Centre at Bicetre, in the southern Paris suburbs.

"It starts with simple requests, such as 'squeeze my hand.'"

In accidents of a similar severity, patients often had a disability after their emergence from coma, the experts noted.

"Recovery can be a very long road. In some case, patients improve between a year and three years later," said Vigue.

Schumacher, who turned 45 on January 3, dominated Formula One.

As an F1 racer, Schumacher was known for his daring overtaking maneuvers, his at-times almost reckless abandon in the pursuit of victory and his mastery of tricky conditions presented by rain.

On that fateful day at the Meribel resort, Schumacher appears to have skied on a partially covered rock, lost his balance and fallen on another rock further down, according to the prosecutor in charge of the probe.

The impact was so strong it smashed his helmet in two. NDTVSports.com

01/17/14 (GMM) Michael Schumacher's condition is no longer critical, his management announced in a statement.

For the first time since his skiing fall almost three weeks ago, the 45-year-old German's condition was described on Friday simply as "stable", although he remains in coma.

"Michael's family is very happy and confident with the work of the team of doctors treating Michael, and they trust them completely," said the seven time world champion's manager, Sabine Kehm.

Kehm dismissed reports of recent days suggesting the great former Ferrari and Mercedes driver might never emerge from his coma, or that if he does, he will not not recover to full health.

"Unfortunately I have to repeat that any information regarding Michael's health not coming from the doctors treating him or from his management must be treated as pure speculation," she said.