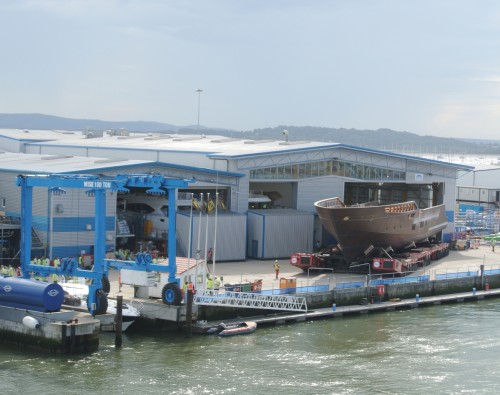 Jordan has been waiting two years for the Sunseeker vessel after construction started in Poole, Dorset, in 2012.

The vessel is so named because it measures 155 feet, the largest vessel Sunseeker has ever constructed.

On board the luxury four-deck yacht will be a nightclub, a lower deck day-room, and there will be a 'beach club' stern and panoramic viewing platforms down the side, giving guests a front-row seat for the Grand Prix at Monaco.

Pit stops for the yacht will be considerably more expensive than those for F1 cars though, with refuelling the super yacht's 60,000 liter diesel engine set to cost Jordan a cool $50,000 each time.

Stewart McIntyre, managing director at Sunseeker, said: "This is an extremely exciting time for Sunseeker as we inch ever closer to the completion of the 155 Yacht.

"This is the biggest project we have ever undertaken and since the announcement of its build it has been the talk of the industry. We are incredibly proud of what we have created and look forward to showcasing it to the world."

While the yacht might seem the height of decadence to some, Jordan is some way off the podium when it comes to the world's largest yachts.

The biggest is the Azzam, which was completed last year and measures a huge 180m, almost 600 feet long.

It took one year to design and plan the mega yacht and a further three years to build it. When completed the Azzam knocked Chelsea FC owner Roman Abramovich's yacht Eclipse, which measures 162.5m, off top spot.

The top five largest private yachts in the world: