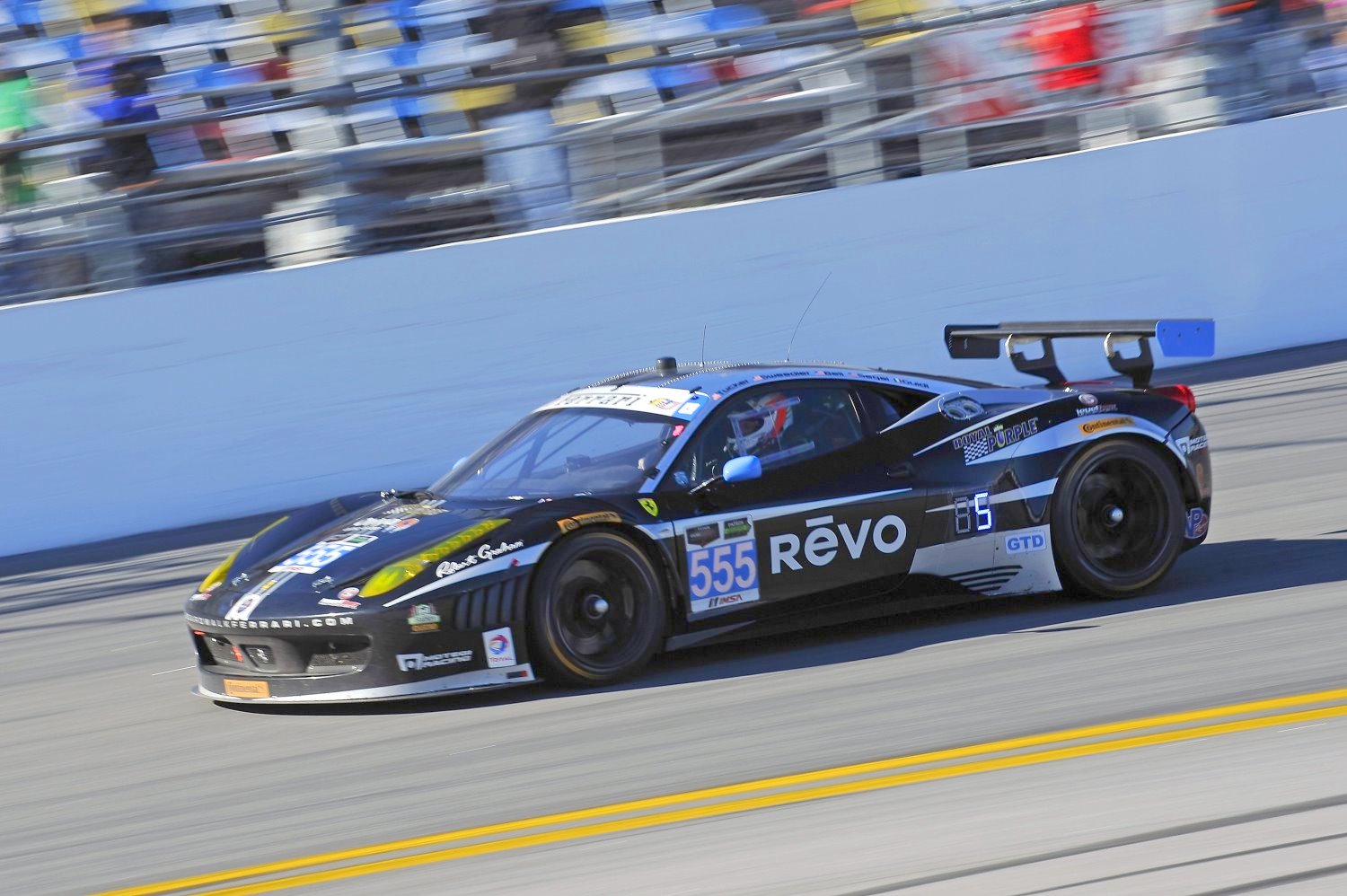 A full post-race review of the incident on the last lap of the 52nd Rolex 24 At Daytona was completed by IMSA Supervisory Officials. The decision has been made to reverse the decision by the race director, rescind the penalty against the No. 555 Level 5 Motorsports Ferrari 458 Italia team, and reinstate drivers Scott Tucker, Bill Sweedler, Townsend Bell, Jeff Segal and Alessandro Pier Giuidi as the GT Daytona class winners.

We regret the confusion following the race, and appreciate the patience by our fans, drivers, teams and the media so we could properly review and subsequently report this decision.

DAVE HART: At the podium now, at the table, Scot Elkins, IMSA vice president of competition and technical regulations. He will be speaking after I make a statement on behalf of IMSA. A full postâ€'race review of the incident on the last lap of the 52nd Rolex 24 at Daytona was completed by IMSA supervisory officials. The decision has been made to reverse the decision by the race director, rescind the penalty against the No. 555 Level 5 Motorsports Ferrari 458 Italia team and reinstate drivers Scott Tucker, Bill Sweedler, Townsend Bell, Jeff Segal and Alessandro Pier Guidi as the GT Daytona class winners. We regret the confusion following the race and appreciate the patience by our fans, drivers, teams and you, the media, so we could properly review and subsequently report this decision. With that I will let Scot make quick remarks and then we'll open it up.

SCOT ELKINS: Thanks, everybody, for sticking around and having a chance to hear about this. Our rule book is very clear in regards to this type of a situation. There is a section in the rule book in many, many places where it mentions a group of supervisory officials. Those officials are named, and it's very clear that when a decision by the race director is one that the super advisory officials feel needs a review, the process for us to do that exists, and that's exactly what's happened here. It's very clearly stated, and it's something that is for cases just like this.

Q. Knowing that we just completed 23 hours and 59 minutes of racing, is this something that in retrospect a decision could have been held until after the checkered flag to avoid having to go through this process?

SCOT ELKINS: You know, it's a good question. Honestly. The thing is that the group of supervisory officials aren't always present in race control, so the way it's worked and the way it's always worked and the way the rule book states it is that the race director is the chief executive of the competition and that his decision is the first decision, and if anything seems different or seems to need review, then we gather the group of supervisory officials and take a look at that decision, and that's exactly what we did here.

The uniqueness of this was that it was on the last lap of a 24â€'hour race, and so the race director was doing exactly what he is expected to do, which is to make a decision and try to have some finality prior to the end, and that's what he did. The process worked. If you're asking could we have done it differently, I don't think so.

Q. Can you explain how many people are on this committee and how it's made up?

Q. If there was a complaint filed about the decision, and is there a reason why you reviewed the incident, or was it your own decision to review it?

SCOT ELKINS: Yeah, it's an internal process. It's not one that is allowed for any external activity. Honestly the rule book is â€'â€' again, I'm sorry I keep saying this, but the rule book is very clear on what items in the regulations are available for protest. As this is a race procedure, it is not an item that can actually be protested or appealed in any way. So the purpose of the supervisory official group is to allow us to have an internal review of a decision by an official, and that’s how the process worked.

SCOT ELKINS: No, the avoidable contact regulation is actually quite clear in the rule book, as well. It's called avoidable contact, but contact isn't necessarily needed to invoke the penalty. The review was that in sitting down and looking at the regulations and looking at the decision that was made by the race director and looking at the situational items respective to the contact that happened in that specific area â€'â€' sorry, I don't mean to say contact, the incident that happened in that specific area, we came to the conclusion that â€'â€' as we do many times in race control and many times during an event, that it was a racing incident, one that was not deemed a penalty.

Q. There was an incident I think the previous lap or maybe the lap before between the 555 and the 45. What was deemed from that incident, and did that play a factor into any of this?

SCOT ELKINS: No, every incident is judged on its own accord, and the incidents â€'â€' I know I've spoken with you about it a number of times, I've spoken with Marshall about it a number of times. The information we have in race control is the information we have to base our decisions off of, whether people like it or not. We don't see every piece of contact that occurs on the racetrack. It's somewhat limited by the cameras that we have and the views that we have outside of race control. This was solely about this single incident.

Q. And that ruling from that incident before, that was just deemed a racing incident?

Q. Can you just explain a little bit the process between what took place from the time of the checkered flag to notifying the teams? How was the notification processed?

SCOT ELKINS: Again, this is an internal process, as I have described, and what it was it was a meeting of the supervisory officials, who gave us an opportunity to sit down and look at the data that was involved in the incident. It didn't, as you guys can tell, I don't know what time it is, but I think the race finished more than a few hours ago, and what we did was we went through that internal process and then provided a notification to the teams personally. I spoke to both of the teams and provided that information to them before we went any further.

DAVE HART: Thank you very much. We've got a group of drivers here who have waited quite a while to come up and claim their rewards as the winners of their class in the Rolex 24 at Daytona.