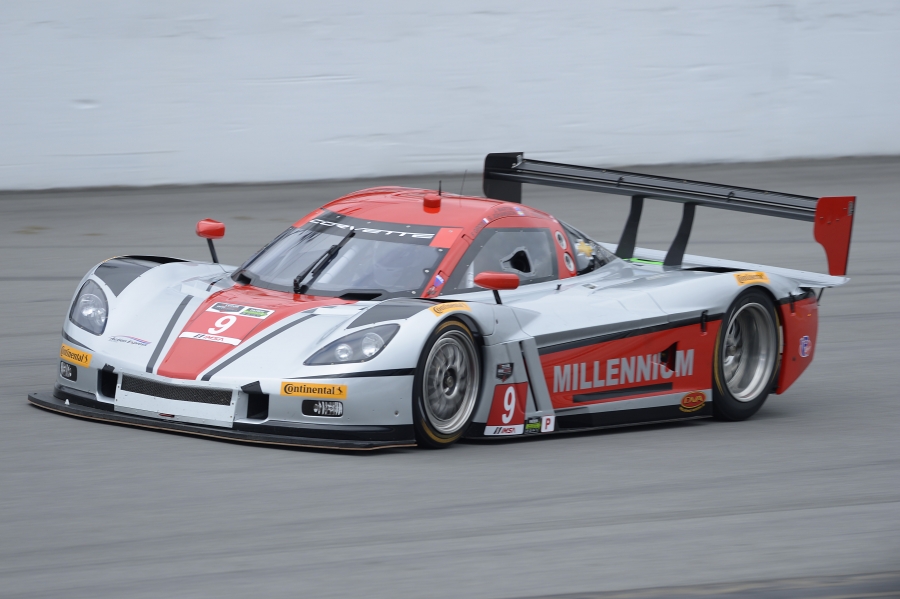 Wayne Taylor Racing saw bad luck strike two of its toughest rivals at the 18th hour mark of the Rolex 24, allowing the team to also take the lead in the Tequila Patron North American Endurance Cup.

Racing resumed following the 12th caution period at 7:32 a.m. As racing resumed, the second place No. 5 Action Express Corvette DP of Joao Barbosa was called for a stop-plus-70-second penalty for avoidable contact.

Twenty minutes later, the second-place No. 02 Target/Telcel Ford EcoBoost/Riley of Scott Dixon cut a right-rear tire in the infield, resulting in a slow trip for the two miles back to the pits, dropping the car to fifth.

After 18 hours, Ricky Taylor ran 2nd in the No. 10 Velocity Worldwide Corvette DP, 14 seconds behind Burt Frisselle in the No. 9 Action Express Corvette DP and Barbosa. Lucas Luhr has worked his way up to fourth in the No. 6 Muscle Milk Pickett Racing Nissan/ORECA, followed by Dixon. Mike Rockenfeller’s No. 90 Spirit of Daytona Corvette DP has fallen to sixth following a brake change and is two laps back.

Patrick Pilet leads in GTLM in the No. 911 Porsche North America Porsche 911 RSR, but his wing man – Michael Christensen in the No. 912 – has fallen to fifth after going to the garage to have the crankcase checked. Robin Liddell is second, 12 seconds back in the No. 4 Corvette Racing Corvette C7.R. followed by BMW Team RLL teammates John Edwards (No. 56 BMW Z4 GTE) and Andy Priaulx (No. 55), both one lap down.

Enzo Potolicchio leads PC in the No. 25 8Star Motorsports ORECA FLM09, while Jeff Segal continues to lead GTD in the No. 555 Level 5 Motorsports Ferrari 458 Italia.

Alessandro Balzan, running second in GTD, pulled off course in the No. 63 Scuderia Corsa Ferrari 458 and drove to the garage just before the 18-hour mark.