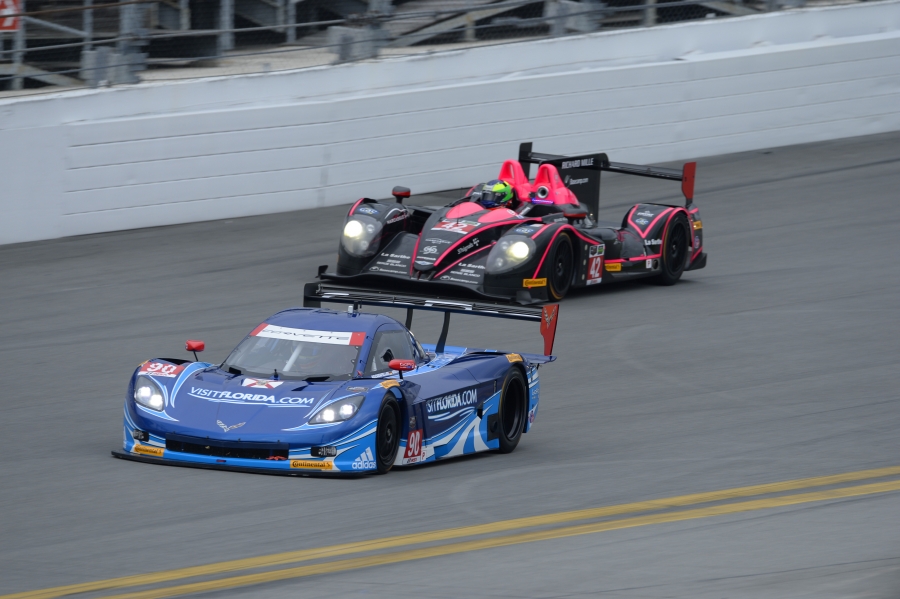 Local race fans will have no problem finding a car to cheer for in Saturday's 52nd Rolex 24 At Daytona. After qualifying second on Thursday, Spirit of Daytona Racing driver Richard Westbrook was fastest in Friday's final practice before the debut of the TUDOR United SportsCar Championship and the Tequila Patr¢n North American Endurance Cup.

Westbrook ran a lap of 1:39.256 (129.121 mph) in the No. 90 Corvette DP to lead the one-hour session. He will be joined racing for the Daytona Beach-based team by Michael Valiante and Mike Rockenfeller for Saturday's race that begins at 2:10 p.m. ET.

"It's nice knowing that we have the pace to be contenders under our right foot," Westbrook said. "We've had a real nice build up for the Rolex 24. The car is fast and comfortable to drive. This is the first time I've been at the Rolex 24 in a DP where I can say I have a chance to fight for the win. We've got the pace. Now, we have to stay out of trouble and give ourselves a chance. We'll give it a go."

After missing Thursday's qualifying due to an electrical problem in the No. 62 Risi Competizione Ferrari F458 Italia, Matteo Malucelli turned in the fastest lap in the GT Le Mans (GTLM) class in Friday's session, 1:45.007. He will co-drive with Formula One veterans Giancarlo Fisichella, Gimmi Bruni and 2000 Rolex 24 winner Olivier Beretta in the event.

Sam Bird was fastest in Prototype Challenge (PC) in final practice, running 1:42.176 in the No. 8 Starworks Motorsport ORECA FLM09, while Milo Valverde led GT Daytona (GTD) competitors with a lap of 1:48.073 in the No. 556 Level 5 Motorsports Ferrari 458 Italia.

GLORY DAYS ARE BACK FOR HOBBS: David Hobbs raced in the inaugural Daytona Continental, when the young British driver was among the drivers invited by Bill France Sr. to build an international field for the 1962 event. Within four years, that race grew to 24 hours, with Hobbs driving a Ford GT40 in two races. He won his class in 1981 in a BMW, and returned at the height of the IMSA GTP days to race Jaguar and Ford prototypes.

This weekend, Hobbs has again been invited back to Daytona – to serve as Grand Marshal for the 52nd Rolex 24.

"I've always been a big sports car buff," Hobbs said. "When I was a kid, the race I really wanted to win was the 24 Hours of Le Mans. The new TUDOR Championship and the unification is the best thing to happen to sports car racing in decades. This field is awesome. We have a fantastic field of drivers, and the cars are awesome. And the competition is unbelievably close! Coming here really brings me back to the days of the Ford GT40s vs. Ferraris, now we're seeing those days again."

NO SECOND THOUGHTS: Sebastian Saavedra didn't hesitate when he was asked to drive Peter Baron's No. 78 Starworks Motorsport Dinan/Riley DP.

"When I got the opportunity, I didn't think twice," said Saavedra, a Colombian who competes in the IndyCar Series and is a two-time winner in Indy Lights. "This is very different from what I'm used to, and it was exciting running laps at night. I'm not only learning the car, but learning the track since this is my first time running at Daytona. But my teammates helped make it a faster learning curve."

"We lost our qualifying time because of a problem with the brakes ducts – nothing to do with performance," Hartley said. "Our car is fast, and I think we're looking good."