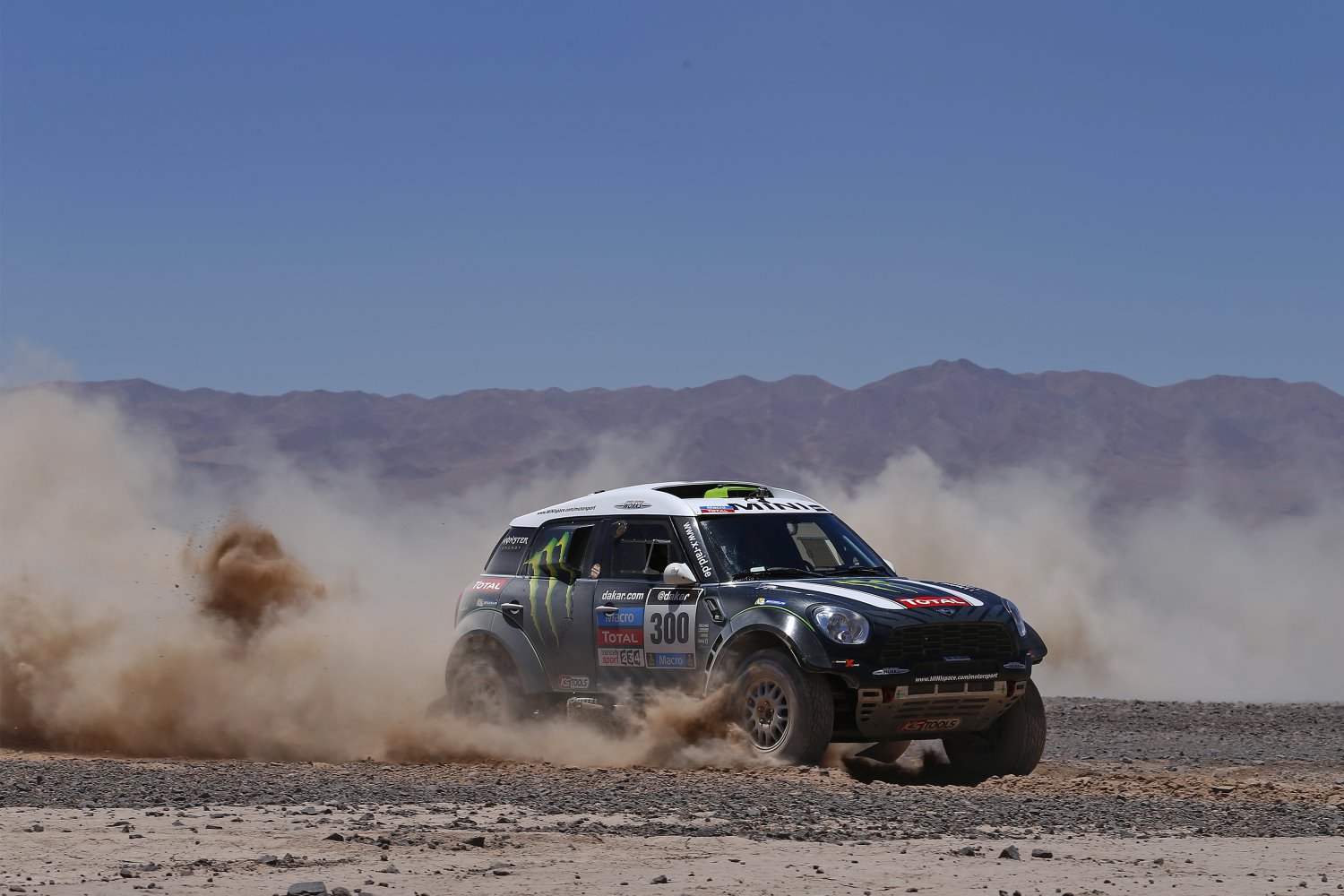 On the last major sandy special on the Dakar 2014 Stephane Peterhansel moved into the lead of the Dakar Rally on Friday, despite the X-raid team calling off the fight for victory on the previous day.

The Frenchman trailed team-mate Nani Roma by over five minutes going into Friday's 12th stage from El Salvador to La Serena, and the team had decided it did not want to take any risks.

"The game is over," said Peterhansel on Thursday. "We've had a good laugh and enjoyed ourselves. Yesterday evening, the team asked us to not take any more risks."

However, Peterhansel won Friday's stage and overtook Roma at the top of the standings.

He now leads the Spaniard by 26 seconds ahead of Saturday's final stage.

In bikes, Cyril Despres once again dominated and picked up his second special stage victory of the year, ahead of Marc Coma. The leader of the general standings (Coma) is still in full control and all the more comfortable since his closest pursuer Joan Barreda experienced serious mechanical problems.

Despres won again, Coma controlled and Barreda fell apart on 350 km against the clock which finished in the dunes of Copiapo, as part of a 699-km stage between El Salvador and La Serena served up for the competitors as the penultimate stage of the Dakar 2014. The day was won in the style of a past-master by Cyril Despres, claiming his second triumph in 2014 and his 33rd on the Dakar! Second to start this morning behind Marc Coma, the title holder quickly caught up with the Catalan and overtook him to open the way, followed by the current general standings leader, riding to protect his advantage at the end of the rally. Behind them, the day's big loser was Joan Barreda, second in the general standings on departure from El Salvador this morning. Following electrical problems on his Honda, the Catalan had to stop several times from the 265-km point onwards and crossed the finishing line on foot, 2:29'35 after Despres! His misfortunes smiled on Olivier Pain, the third quickest today, 5'57' behind the stage winner, but also Helder Rodrigues, fourth to finish, 7'21'' behind Despres, and Jordi Viladoms, fifth placed 9'10'' behind the day's fastest man.

In the general standings, Marc Coma, who received a fifteen minute time penalty yesterday evening after changing his engine, takes a decisive advantage for victory with a lead that now stands at 1:59'49'' over none other than his water carrier Jordi Viladoms. The second ranked Catalan will nevertheless have to be careful on the final stage, since he only has a lead of 10'27'' over the first Yamaha ridden by Olivier Pain, who is in turn a short 3'45'' in front of his team-leader, Cyril Despres, who could still finish on the podium in Valparaiso.

In the quad race, despite yesterday's long stage and the soreness he was suffering in his hands and wrists, Ignacio Casale again demonstrated his supremacy by winning the day's special in front of one of the category's other leading lights, Dutchman Sebastian Husseini, who finished 5'05'' behind the young Chilean. In the general standings, the day before the last special, Casale reinforces his status as successor to Marcos Patronelli since Rafal Sonik lost twenty minutes to find himself in second position 1:23'42 behind Casale, whilst Husseini again lost time, but is still solidly installed on the third step of the provisional podium, more than 5 hours behind the general standings leader.

In the car category, it is difficult to understand what is going on. The situation is somewhat of a muddle because following the announcement of team orders to hold positions from yesterday morning onwards, Nani Roma, Stephane Peterhansel and Nasser Al-Attiyah spent the day on the attack… The first to start this morning, Orlando Terranova again got stuck on a dune and lost a valuable amount of time. Just behind him, Nani Roma suffered from a puncture at the start of the special and was soon caught by Nasser Al-Attiyah, then Stephane Peterhansel. Driving behind the leader of the general standings, the man from Vesoul in France moved ahead after Roma himself got stuck on a dune, but only for a short amount of time. Seeing the yellow Mini of the rally leader arriving in his rear-view mirror, Peterhansel moved aside to let his Catalan team-mate pass. However, Roma declined the invitation, preferring to follow ‘Mister Dakar' throughout the entire section of dunes, before finally overtaking 500 metres from the finishing line. This proved insufficient to win the stage or to maintain his lead in the general standings.

In fact, taking advantage of a navigation error by Nasser Al-Attiyah at the end of the special, in the end Stéphane Peterhansel won stage 12, his 65th on the Dakar, 3'38'' ahead of the Qatari and 5'58'' in front of Nani Roma. In the general standings, ‘Mister Dakar' now takes charge, 26" ahead of his Catalan team-mate, whilst Nasser Al-Attiyah still occupies the third step on the podium, 54'07'' behind the leader. Finally, the only non-Mini driver in the top 5, Giniel De Villiers again put in a fine performance with the day's fourth best time, enabling him to regain fourth place in the general standings, 6'44" ahead of Orlando Terranova. At every level, everything is still up for grabs on the last stage!

Finally, in the truck race, though the special saw a surge of pride from Gerard De Rooy provide him with a third stage triumph in 2014, his 27th on the Dakar, it was Andrey Karginov, second to finish, 31'' behind the Dutchman, who retains the lead in the general standings, 7'25'' ahead of De Rooy. Third to finish and still third in the general standings, title holder Eduard Nikolaev now lies 1:38'38'' behind the rally leader.