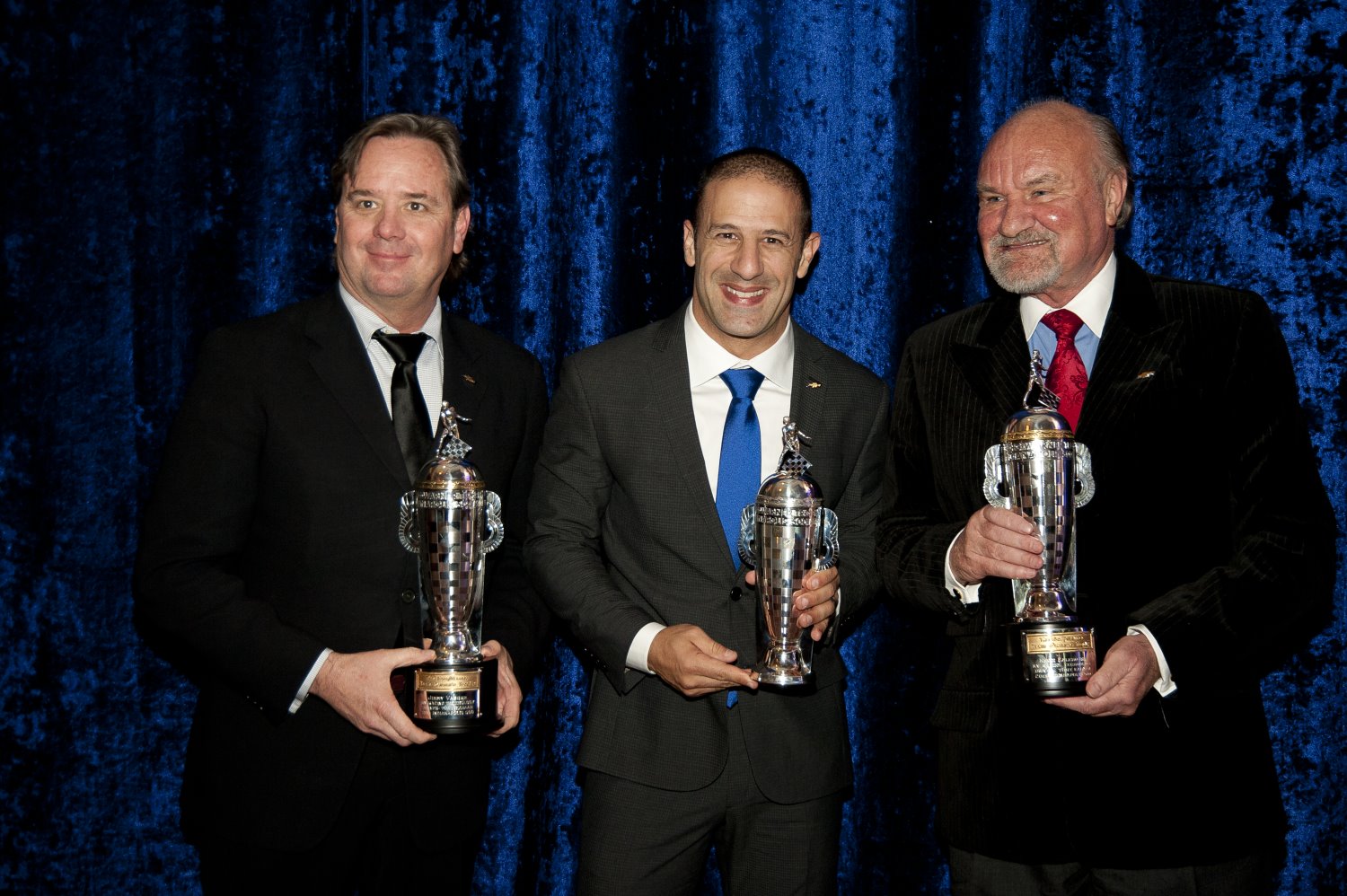 Kevin Kalkhoven said he was delighted to be in the right place at the right time.

The KV Racing Technology co-owner accepted the BorgWarner Championship Team Owner's Trophy – a keepsake for the winning team owner(s) of the previous year's Indianapolis 500 Mile Race – during a dinner in conjunction with the Automotive News World Congress on Jan 15.

"The funny thing is when we won everybody rushed off to Victory Circle. There's a photograph of me standing on the (timing) stand five minutes afterward looking up at the No. 11 and saying, 'We won,' '' Kalkhoven said. "I was in complete shock. Being able to relive it tonight knowing that we actually have won is an incredible occasion."

Kalkhoven joined team co-owner Jimmy Vasser on the stage to receive their trophies from BorgWarner CEO James Verrier, who also presented the BorgWarner Championship Driver's Trophy to Tony Kanaan and a replica "Baby Borg" to his son Leonardo.

"Winning the Indianapolis 500 is the goal of every Indy car racer," said Vasser, who won 10 Indy car races and the 1996 CART championship in his career. "The spectacle of the '500', that iconic trophy and like Al (Unser) Jr. said in '92, 'You just don't know what Indy means.' I wasn't able to win it as a driver, but being able to win it as an owner with my partner, who's put a lot of heart, soul and money into Indy car racing over the last decade, and to do it with Tony, who is hands down the fans' favorite, is a memory that is emblazoned in my mind forever.

"Reliving that day here is so special. It's like the gift that keeps giving."

Added Kalkhoven: "I'm honored to be here, but the heart and soul of the team is Jimmy. It's been a great partnership. We won and now it starts all over again."

Four-time CART champion Sebastien Bourdais will compete in the Chevrolet-powered No. 11 KVSH Racing entry in the 18-race season that commences March 30 with the Firestone Grand Prix of St. Petersburg. KV Racing Technology is drawing near to completing a deal for a second driver to complement Bourdais.

"We thought very long and hard about who we wanted," Kalkhoven said of the French driver who lives in St. Petersburg, Fla., with his family. "Having been in Champ Car, I had always been incredibly impressed by Sebastien and wanted Sebastien, and I'm delighted to say we were able to sign him to a two-year deal. He feels now that he's at home again. He has a good engineering group around him, and they are working already on building the car for the '500.' "

Bourdais, who already has participated in offseason testing with the team, will be on track again Jan. 17 as part of a Chevrolet manufacturer session at Sebring International Raceway. Next week, Bourdais will compete in the Rolex 24 At Daytona.

"Sebastien is just coming into his form again," Vasser added. "He came back from Formula One, dabbled a bit in IndyCar with Dale Coyne (Racing) and sports cars and not running any ovals. Now with a full season, in which he had three podiums in the last three races and led convincingly at Fontana to show people he's not afraid of ovals, he has that hunger to win. We have a good oval platform, and coupled with Sebastien's savvy on road and street courses, it's all coming together for him. He's hungry and we're ready to go."