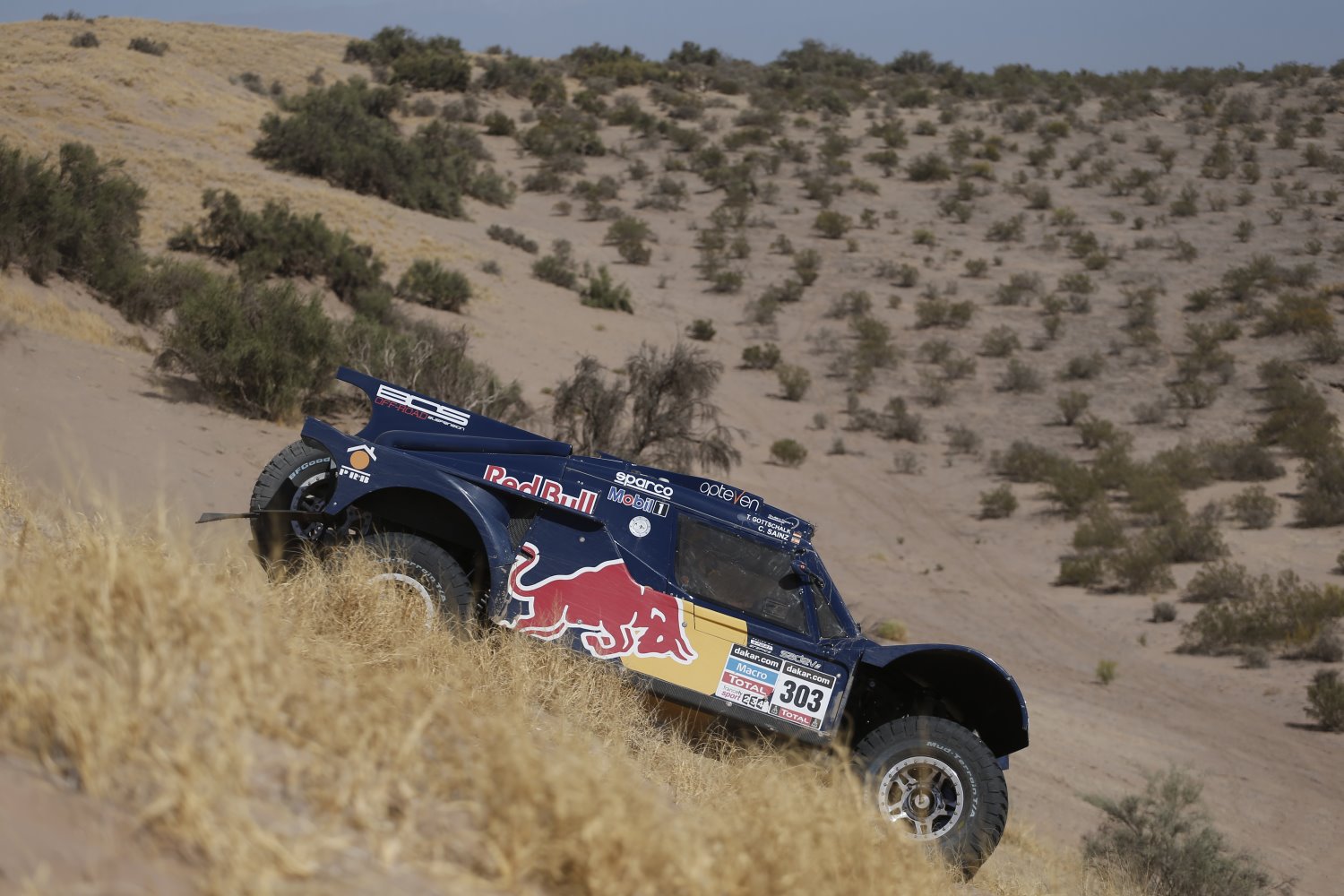 Carlos Sainz cruised to a comfortable win in today's seventh stage of the 2014 Dakar Rally in the car class.

In Bike's, Spain's Joan Barreda took his third victory in the 2014 edition, beating overall leader Marc Coma by 4â€²03â€³ at the end of a historic stage that took the Dakar to its 28th country. Instead of making a foray into Bolivia, the cars raced on a wide 500 km loop around Salta that was more suited to Carlos Sainz's buggy. "El Matador", not one to let such opportunities pass him by, took his 27th Dakar win ahead of Qatar's Nasser Al-Attiyah and Stéphane Peterhansel, who only managed to claw back 1â€²52â€³ from leader Nani Roma.

The seventh stage of the motorcycle/quad rally, raced at an average of over 3,700 masl, was shortened from 401 km to 104 km due to yesterday's rain in the Salta region. More than enough to push man and machine to the limit, but not enough to keep a lid on the rider standing second overall. Joan Barreda made good use of his fifth place in this morning's starting order to unleash a flurry of attacks and grab his third victory this year and the eighth one of his career, 4â€²03â€³ ahead of fellow countryman Marc Coma. The Catalan, third off the line this morning, drove within his limits throughout stage 7, holding onto Barreda's wheel once the latter had caught up with him and clinging on to limit the difference between himself and his main rival for the title. A carbon copy of the tactic used by defending champion Cyril Despres, who finished third in Uyuni, 5â€²35â€³ behind the stage winner.

Today's flop was Alain Duclos, who suffered the opener's cure and made a navigation mistake towards the beginning of the stage, costing him almost 20 minutes in Uyuni, the site of the historic bivouac of the second marathon stage of the 36th edition. As a result, the Sherco rider lost his third place in the provisional overall classification to Jordi Viladoms by just 32 seconds. Marc Coma's former lieutenant now sits in third place, but 38 minutes behind second-placed Joan Barreda, which is almost the same gap as between the Honda rider and leader Coma. The fight for the title during the second week is shaping up to be a duel in the desert.

The same can be said of the car category after Orlando Terranova was handed a 15-minute penalty for unsporting behavior yesterday. Relegated to fourth behind Giniel de Villiers, the Argentinean may have lost the chance to fish in the troubled waters of the Roma-Peterhansel war. A war in which Carlos Sainz and Nasser Al-Attiyah could well be the kingmakers. And they showed why in stage 7. Carlos Sainz took advantage of the terrain suited to his buggy and of Giniel de Villiers' puncture to drive at the front of the race and pull out all the stops. The prize? A second stage win in 2014 and his 27th Dakar victory —helped in no small part by Nasser Al-Attiyah's little navigation mistake. In the end, El Matador was 4â€²24â€³ faster than the Qatari and 7â€²04â€³ quicker than Stéphane Peterhansel, who opened the race and had to slow down several times due to… llama herds encroaching on the course!

As a result, "Monsieur Dakar" was only able to take back 1â€²52â€³ from leader Nani Roma. The Catalan, who still has a margin of over 30 minutes, has decided to drive within his limits during the second week and is now racing, in his own words, at 90%. Nevertheless, this was enough for him to post the fourth best time in stage 7, 8â€²56â€³ behind Carlos Sainz. Further behind, the South African's puncture did not stop Giniel de Villiers from gaining the upper hand in his fight with Orlando Terranova for third place, finishing eighth in today's stage, 16â€²25â€³ behind the winner but 1â€²25â€³ ahead of the Argentinean driver, who made a couple of navigation mistakes too. De Villiers now has 6â€²11â€³ on the local hero.

Finally, the second week began with defending champion Eduard Nikolaev bursting back onto the scene with his first Dakar stage win, 3'35" ahead of teammate Dmitri Sotnikov and 4'34" ahead of Gerard de Rooy. However, Iveco's Dutchman continues to have a solid grip on the general classification, where he leads Andrey Karginov by 37'50" and Nikolaev by 1 h 03'08".