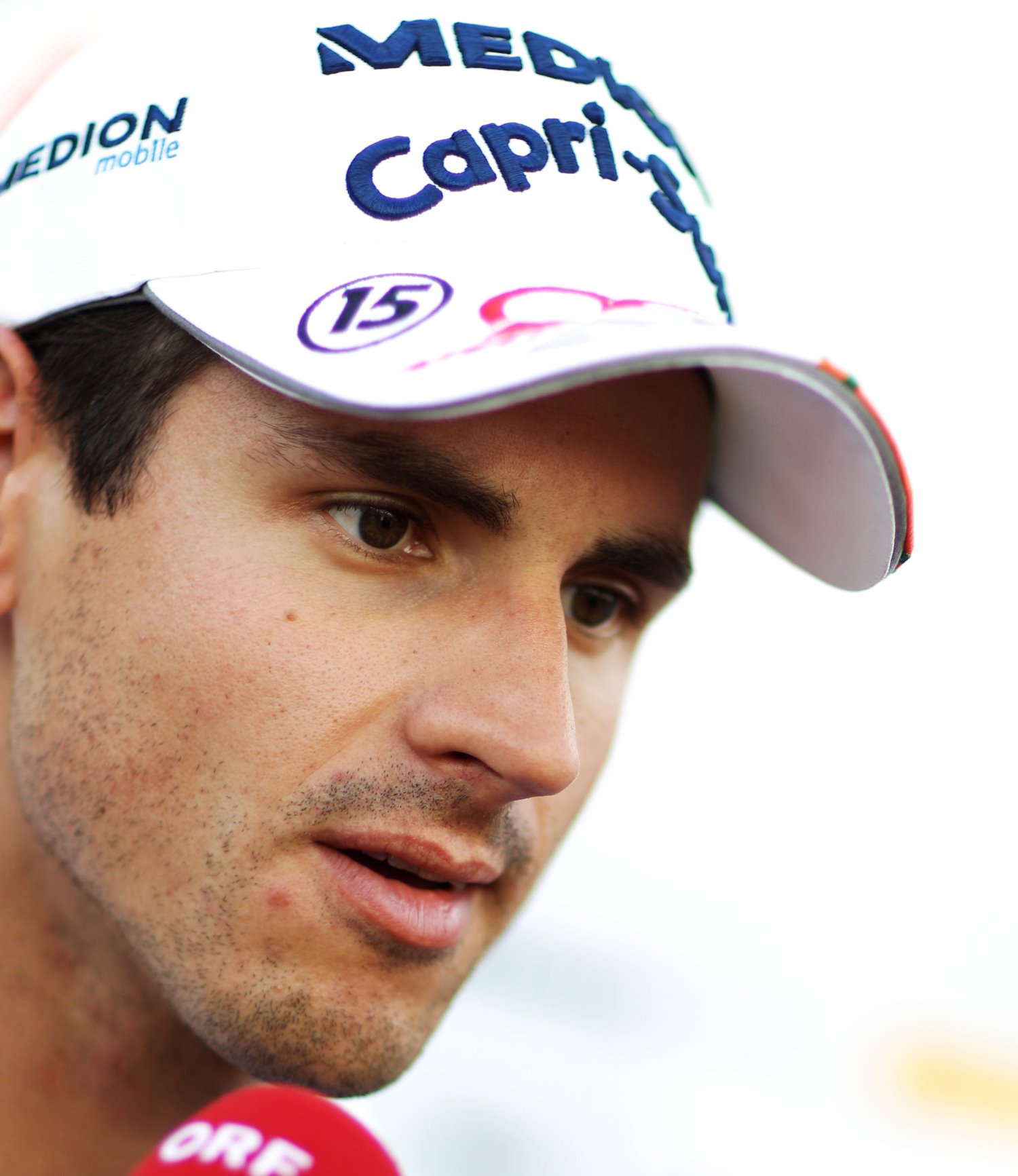 Missing first test 'not good' for Lotus – Sutil
(GMM) Adrian Sutil has questioned Lotus' decision to sit out the opening test of the official 2014 pre-season period.

The Enstone based team – who like Red Bull, Mercedes and Ferrari scored more than 300 points last year – announced this week that attending Jerez late this month "isn't ideal for our build and development program".

German Sutil will drive for Sauber in 2014, a team that like Lotus publicly struggled with its finances throughout last season.

But the 30-year-old driver indicated Sauber will definitely be at Jerez, where teams will have their first chance to put their 2014 cars through their paces, featuring all-new turbo V6 engines and energy recovery systems.

"This is a very important test," Sutil told Reuters, "and we don't have much (testing) so I think it's clear that it will be a disadvantage for Lotus.

"But who knows why they decided it? I would say it is definitely not good."

Sutil acknowledged, however, that difficult financial circumstances could also continue to hinder Sauber's progress, although he sounded confident the Swiss team will succeed.

"I think it's all in there, they have the knowledge of how to do it," he said.

"If that financial part comes better and better I think this team will make a big step."

Caterham to unveil 2014 car at Jerez
(GMM) Caterham has announced it will have its 2014 car ready for the start of official 2014 testing.

Lotus, fourth in 2013 but struggling with financial problems, said earlier this week it will not be at Jerez for the first four-day test, which will feature all-new cars and turbo V6 engines for the first time.

But the other teams are all expected to be in southern Spain, with Jerez one of only three four-day tests scheduled before March's Melbourne season opener.

Adrian Sutil has indicated Sauber, having also struggled financially in 2013, will be at all three tests at Jerez and Bahrain, and backmarker Caterham said on Wednesday it will also have its 2014 car ready to run.

However, Caterham – having fielded Giedo van der Garde and Charles Pic in 2013 – is yet to announce its race drivers for the new season.

"Knew we'd forgotten something!" Caterham joked when asked by one of its 160,000 followers if it was "not bothering" about signing drivers for 2014.

There has been speculation the seven time world champion's skis failed, that he was travelling too fast, or that the 'off-piste' section at the Meribel ski resort was poorly marked.

And "I have come to the conclusion that he made a conscious decision to leave the piste", Quincy said in a news conference on Wednesday, according to Germany's Welt newspaper.

Police investigator Stephane Bozon agreed, saying Schumacher – currently in a critical condition and coma in Grenoble hospital – was skiing "quite normally for the terrain".

"The skis were not the cause of the accident," he added, confirming that the 45-year-old had fallen forward after tripping on a rock, striking his head on another.

The investigators also said they reviewed high-quality footage from a Gopro camera mounted on Schumacher's helmet, contradicting claims the F1 legend only entered the off-piste zone to help a fallen fellow skier.

"In the video, in the field of vision, no one else can be seen, including anyone else having an accident," they told reporters.

Quincy said the investigation is not yet complete, and it is "too early to establish responsibilities", but he seemed to clear Meribel's name by saying the resort appeared to have "observed all standards" for safety.

Ecclestone future hangs on trial verdict
Formula One boss Bernie Ecclestone has revealed that a Â£240m ($400m) lawsuit against him will get the red light if he wins a High Court trial which finished last month writes Christian Sylt in the Independent.

German media rights firm Constantin Medien claimed in court that Ecclestone and his Bambino family trust paid a Â£26.7m ($44m) bribe to undervalue a 47.2% stake in F1 when it was sold by German bank BayernLB to private equity firm CVC in 2006. The money was paid to BayernLB banker Gerhard Gribkowsky and Constantin says that in return he steered the sale of F1 to CVC as it had agreed to retain Ecclestone as the boss of the sport.

CVC bought the stake for Â£494.8m ($814m) but Constantin says other buyers would have paid more. It claims that it lost out since it had an agreement with BayernLB which entitled it to 10% of the proceeds if the stake sold for more than Â£670m ($1.1bn).

Constantin sued Ecclestone, Gribkowsky, Bambino and its former legal adviser Stephen Mullens for Â£85.3m ($140.4m) in damages and judgment in the case is due early this year. It could be a watershed moment for Ecclestone.

In the last few days of the Constantin case BayernLB won access to the documents from the trial and a spokesman announced that the bank "expects to file suit against [Ecclestone] in the High Court in London in January 2014." Like Constantin, it claims that the F1 stake was undervalued and it is understood to want Â£240m in damages.

When asked whether he expects BayernLB to take legal action if the judge in the Constantin trial rules that the stake was not undervalued, Ecclestone said "No. BayernLB are waiting for a settlement. I think they think that this [judgment] is not going to come out until February or March and they have plenty of time to cause trouble."

Ecclestone says that he would not settle with BayernLB and may force the case to be heard even if it has been ruled that the stake was not undervalued. "It might go ahead. I might insist it does. I don't know why it has taken all this long [for BayernLB to take legal action]."

In 2012 a German court sentenced Gribkowsky to eight-and-a-half years in prison for receiving the alleged bribe and in May Ecclestone was charged with paying it. German prosecutors have said that they will make a decision this year on whether to bring him to trial.

If Ecclestone loses the Constantin suit it increases the chance that he will be put on trial in Germany. It would also play into the hands of the Bluewaters investment fund which claims that it placed the highest bid for F1 in 2006 and is suing Ecclestone in the New York Supreme Court.

Ecclestone, Bambino and Mullens deny that the payment was a bribe and say that Gribkowsky threatened to make false allegations about Ecclestone's tax affairs if the money had not been paid.

So the admission this week that Lotus will not be at Jerez, where most other teams will run their all-new V6-powered 2014 cars for the first time, raised renewed alarm bells about Lotus' financial health and competitiveness going forwards.

But Frenchman Boullier said other teams will also be joining Lotus on the sidelines.

"You will see, we will not be the only team not being in Jerez," he told the BBC. "I know this for a fact already."

In the team announcement earlier this week, technical boss Nick Chester said Lotus' decision was because Jerez in late January "isn't ideal for our build and development program".

But Boullier admitted the E22 will simply "not be ready on time".

"We will be ready shortly after that," he insisted, "and in some ways, it is not bad because we will have time to watch what the others are doing and nobody will be able to watch what we are doing."

However, he also said he has "concerns" about missing the initial four-day test, which will only be followed by eight days of running in Bahrain prior to Melbourne.

"So we have to focus on doing things a little bit differently to make sure we do not lose too much," added Boullier.

Joining Massa for the ninth running of the competition will be Marussia Formula 1 racer Jules Bianchi, along with a host of former F1 stars including Rubens Barrichello, Sébastien Buemi, Vitantonio Liuzzi and Bruno Senna.

A selection of established names from other motor racing categories will also be in attendance.

The event will be staged from January 10-12 at the Beto Carrero World karting track in Penha.

Full line-up for 2014 Challenge of the Stars:

Di Resta, who made his debut with the Silverstone-based outfit in 2011, has been dropped ahead of the 2014 campaign, with Germany's Nico HÃ¼lkenberg returning and Mexican Sergio Pérez switching from McLaren.

Although only Marussia and Caterham are yet to announce their driver plans for the upcoming season, now Sauber driver Sutil reckons di Resta is talented enough to prolong his F1 career should he remain focused.

"It is a shame, he is a grown up driver, but he will know how to deal with it," Sutil explained to Sky Sports.

"There is no question he deserves a drive in Formula 1, he is a really good guy and I think it is important that he continues to work on himself and doesn't give up.

"I don't think you should say that once you are out of F1 you will never go back as this is the wrong attitude. There is always a solution and a way to come back

"If you really want it and you work on yourself then a comeback is possible."

Di Resta has been linked with a return to the DTM series in recent months, which he won back in 2010.

Magnussen confirms car number for 2014
Kevin Magnussen has confirmed that he will use the number 20 during his maiden Formula 1 season.

The 21-year-old Dane, who is to partner Jenson Button at McLaren, has revealed that he chose the number as it was the one he used throughout his title-winning Formula Renault 3.5 campaign with DAMS in 2013.

Magnussen, son of ex-Formula 1 racer Jan, will be only the third rookie McLaren has fielded in its history, following in the footsteps of 2008 title winner Lewis Hamilton and four-time World Champion Alain Prost.

The luxury car maker, which entered F1 in 2011, is now the number one most exposed team partner in the sport, measured by calculating the amount of on-screen branding of the official qualifying and race broadcasts.

“Excellent positioning of clear branding on both the Infiniti Red Bull Racing car, team and drivers in addition to significant airtime thanks to the team’s strong on-track performance throughout the year, gave INFINITI advertising equivalency value of over $1billion from Global TV coverage – an amazing achievement.

TV audiences which drive this value across the world are holding up well and with the increase of second screen activity and changing consumption of media – Formula One is still proving to be one of the biggest value returns in global sport."

“One of our key objectives for the program is to build global brand awareness for Infiniti, so these results really showcase the power of harnessing the global pull of F1 with a modern marketing approach. These figures only tell part of the story however, as they do not account for the significant additional exposure we get from an intensive schedule of F1 marketing and PR activations away from the track.

“When this is combined with the TV coverage garnered from the races themselves, it is clear we have a very powerful asset when it comes to delivering our broader global business objectives."