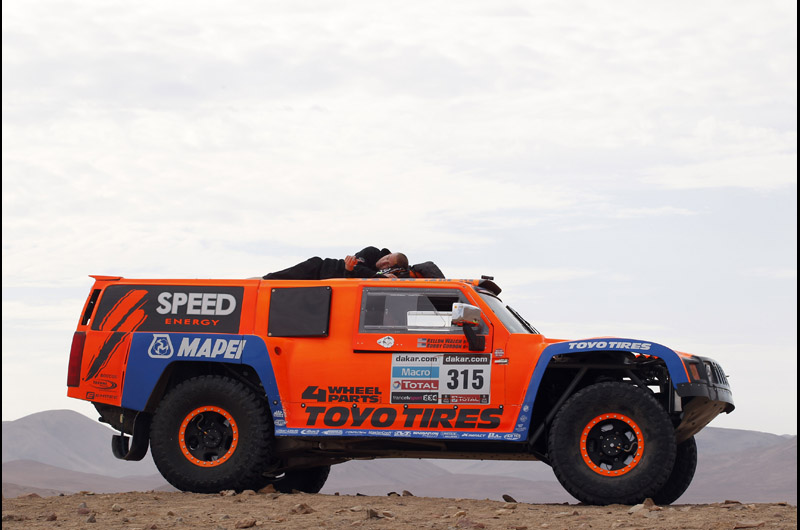 He's been behind the wheel of an 850 horsepower Sprint Cup stock car barreling into Turn 1 at Charlotte Motor Speedway at 200 miles per hour.

And he's nearly won the Indy 500 behind the wheel of a sleek IndyCar, driving the nearly flat Turn 1 of the Indianapolis Motor Speedway at 230 miles per hour—with his right foot to the floor the entire time!

Robby Gordon has built a reputation as someone who lives his life on the razor's edge. And behind this 45-year old Californian's handsome good looks is a spirit of competition so intense that for much of his career, he's had to be his own boss, simply because no one else (according to Gordon) can do it better.

But speed hasn't been the only thing that pushes the veteran driver's buttons.

Following decades of competition in both NASCAR and IndyCar, Gordon now spends his days racing in a highly modified pickup truck, capable of leaping over 50 feet into the air, on a wildly configured course that features huge jumps, sand traps and crossovers built inside a football stadium. It's all part of a series he owns and operates called the Speed Energy Super Trucks, one that brings the thrills and danger of off-road racing into a stadium environment.

But since 2005, he's also competed in the world's most extreme and dangerous race, the legendary Dakar Rally, a grueling two-week off-road challenge that tests the endurance of both man and machine. Started in 1979 in Africa, where it gets its name from the westernmost city of the African mainland, the rally was forced to change its location after political unrest in the region and attacks on the competitors by bands of terrorists in 2008 became an obstacle that even the toughest racers in the world could not overcome. The event was moved to a route through Chile and Argentina the following year and has remained there ever since.

Although he has yet to claim overall victory, he has seen success—winning nine stage victories—only to have one problem or another either force him out of the race or push him back in the final standings.

Despite a somewhat frustrating history in the Rally, Gordon continues to display the confidence of a winner.

"I feel more prepared than in any of our previous trips to the Dakar Rally," Gordon said, per PlanetRobby.com. "Since our first race, where we accomplished our goal of becoming the first American to win a stage, our focus has been on winning the overall title. I believe with the experience we have, and the new car we have built, this year could be our time."

That new car is actually a tricked-out four-wheel drive truck dubbed the HST Gordini, built in North Carolina and equipped with all the latest technological gadgets needed to navigate through some of the toughest terrain in the world.

"Racing is full of 'what-ifs,'" Gordon said. "Like anything else in life you learn from your mistakes and move on to the next challenge. We learned a lot about ourselves over the last 10 stages last year and it gives our team tremendous confidence returning to Argentina."

The 2014 edition of the Dakar Rally winds its way through three countries. Starting in Argentina on January 5, the race briefly goes through the mountains of Bolivia before finishing on January 18 in Valparaiso, Chile. According to the Amaury Sport Organization (via Dirt Sports), "More than one billion fans in 190 countries tuned in to the 2013 edition of the race on television, making it the most watched motorsports event in the world—surpassing Formula 1, the Daytona 500 and Indy 500 combined."

You can follow Gordon's progress on several locations online, including his website. There will also be daily updates on the NBC Sports Network. Bob Margolis/Bleacher Report