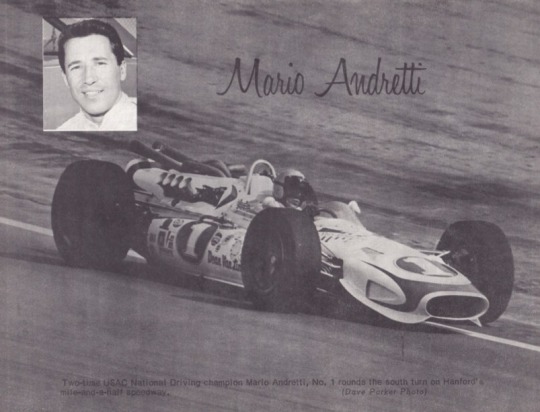 This is an excerpt on the history of Marchbanks Speedway, a racetrack just south of Hanford, Calif., that went by several names and layouts over its two-decade life.

Marchbanks, aka Hanford Motor Speedway, remains little known today but was the first superspeedway west of the Mississippi, and hosted big-name NASCAR and Indy Car races in the 1950s-60s. These days, the track ceases to exist physically and its history lives online only in scattered references on racing forums and enthusiast sites.

"Hanford falls into that category of "What Might've Been" along with Ontario and Trenton. Who knows? It remains one of the most mysterious race tracks of all time. Little known. Little remembered."

Billy Vukovich II told me, "Why would anyone want to write a history about Hanford (Motor Speedway)?" Vukovich was not a fan of the track despite two Top 10 finishes in Champ Car races there in the late 1960s, and had nothing good to say about the speedway. "That place was in the middle of nowhere." Indeed it was, but for any number of reasons, a lot of people have good memories of the place.

Marchbanks Speedway was a lot of things in its two-decade life: dirt and asphalt half-mile oval, 1.4-mile paved tri-oval with two smaller infield ovals, road course, even a spot where dragboats found room to race on its infield.

The track, also known as Marchbanks Stadium and Hanford Motor Speedway, featured some of the biggest names in racing: Fireball Roberts, A.J. Foyt, Parnelli Jones, Gordon Johncock, Johnny Rutherford, Mario Andretti, Mel Kenyon, George Follmer and the Unsers to name just a few. Its races were televised nationally, bragging rights for a small Central California town in the middle of nowhere. It was, as described in "The Stock Car Racing Encyclopedia," "California's first high-banked paved superspeedway to be run under NASCAR sanction."

Mario Andretti's 1969 Champ Car win at Hanford Motor Speedway represented extreme highs and lows: a secret tire setup that left competitors in his dust and a freak pitlane accident that contributed to the death of a mechanic.

In a telephone interview with me from his Pennsylvania offices, Andretti recalled his five appearances at the Hanford tri-oval: a 1965 USAC stock car drive and four Champ Car races from 1967-1969 that resulted in one win, two third-place finishes and two DNFs from the third and fourth starting spots. He obviously found the speedway — the rough 1.4-mile 1965 version and the renovated late 1960s version — a good match.

"I liked the layout," Andretti said. "I liked that it had different radius corners. It required a compromise in the setup. I liked that extra challenge."

But Andretti's only vivid memories of his time at Hanford were of the April 1969 200-miler, the second race of the Champ Car season and the one immediately preceding his only Indianapolis 500 victory. A key to his Hanford win was to add stagger — using tires on the outside wheels that were larger than the inside pair — and therefore pick up speed through corners.

"I only really remember the victory," Andretti said of his races at Hanford. "That's where I discovered stagger in the car while we were testing for Firestone. Even though, technically, if you have a performance find through a tire test you have to share it with the teams, because I found it and it had nothing to do with the construction of the tires themselves I asked them for the benefits for one race. And I killed them in that race.

"So, it's not that I was the first to use that on an oval — it was used by sprint cars and midgets — but it was the first time used by Champ Cars on any oval. I dominated that race with a car I subsequently won at Indy with that year. You can see a chain of events there that brings a vivid memory."

The race featured lots of stiff competition, with the likes of Al and Bobby Unser, A.J. Foyt, Johnny Rutherford and Lloyd Ruby among the starters. Andretti specifically remembers the stagger giving him a boost over Parnelli Jones' impressive new Lola-Ford, in which Al Unser qualified second.

"Al Unser was driving a brand-new Lola that eventually was one of the best cars of the time," Andretti said. "He felt very confident of his chances, but after the start of the race I was pulling him a half second a lap. His car was owned by Parnelli Jones. … I remember Parnelli eyeballing my car and thinking, 'what is making him go so fast?' I was smiling back, thinking, 'if only you knew.' "

Sadly, that 1969 race was marred by a freak pitlane accident on lap 70 of 134 involving James "Red" Stainton, a mechanic for driver Art Pollard. An Associated Press report on the race described the accident:

"Art Pollard of Medord, (sic) Ore., came into the pit to refuel and his car burst into flames. One attendant, Grant King of Fresno, was burned, and Stainton, finding his coveralls on fire, leaped back into the path of Andretti's car. Both men were rushed off in the two ambulances at the track."

"This certainly colors the rest of the day," AP quoted Andretti saying as Stainton was taken away in an ambulance. Stainton died two days later with serious head injuries, and second- and third-degree burns to his head and arms.

When I asked Andretti if he recalled the accident, he didn't hesitate.

"How could I forget? I killed a guy. I could never forget that. There was a fire in the pit next to mine, and just as I drove into the pits one of the crew members dived right in front of me. I didn't see him."

People at the track that day agree Andretti was not at fault.

"There was nothing I could have done," Andretti said. "It was such a surprise."

Andretti's 1965 debut at the track was in a 200-mile USAC stock car race in which he started 12th but finished third, albeit five laps down. Andretti was driving for Kal Simon, who later leased and led a major renovation of the Hanford track. Andretti didn't have much recollection of driving for Simon, but speculated it may have been because of his Ford connections.

"In those days, from 1965, I had a good relationship with Ford because of Indy," Andretti said. "Whenever I would express a desire to race something else, Ford would steer me in a different direction. I was approached by different car owners. Somewhere along the line Kal asked me to do it."

"Aggy was a good promoter," Andretti said. "He knew the value of creating some noise. I remember driving for him different times at Ascot, different places, and he'd pay us starting money, show money, because he expected us to do a little extra work. … He was the top promoter in the series. He was a good man."

"We didn't have too much going on that time in the West Coast and this was a good opportunity to have a presence there," Andretti said of Champ Cars at Hanford. "There was no other oval out there for us. We used to really enjoy the area." LoganMolen.com