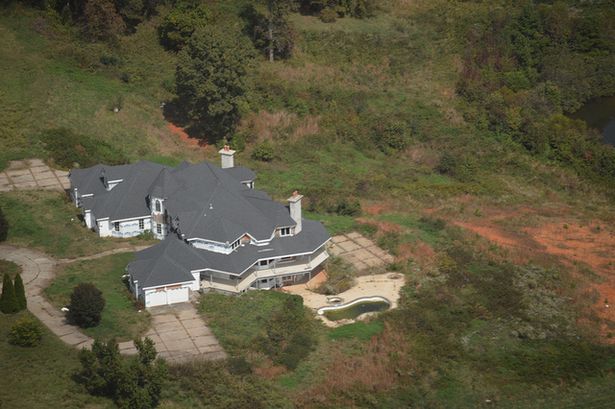 UPDATE #3 It's been too long since Jeremy Mayfield caught up with his fans so here's his answers to the most common questions. It goes along with our feature article on Mayfield.

Firefighters went ahead with a scheduled burn of Jeremy Mayfield's former mansion. Neighbors tell us the house went up very quickly, much of it gone in less than an hour. Smoke was still rising from the home Thursday night that was once owned by former NASCAR driver Mayfield. The mansion was scheduled to be burned to the ground Dec. 14 by the Catawba Fire Department as a training exercise. The original training exercise was canceled due to inclement weather. Viewers sent photographs at the height of the fire in what the fire chief described as a training exercise after the new owner decided to burn it. The new property owner said he wants to farm the land where the house sat.

12/13/13 The scheduled burn of a 12,000-square-foot house once owned by former NASCAR driver Jeremy Mayfield has been canceled.

Carolina Farm Credit took possession of the house after Mayfield was evicted from it in November 2012.

Dellinger Farms LLC bought the house and the surrounding property in April. The most recent valuation states the house is worth $359,000.

Gary Dellinger, 65, of Catawba said his family’s business is already growing soybeans on some of the more than 400 acres of land surrounding the house, and he has plans to grow crops of wheat and corn.

Dellinger said the house was beautiful when it was lived in by former Major League Baseball player Bryan Harvey, but after Mayfield bought the home, it went downhill. Under Mayfield’s ownership, the house was stripped of windows, exterior coverings, flooring, drywall and windows, he said.

“It’s not good for anything. It’s just a shell. … They really ruined a really, truly nice house" Dellinger said. “We looked at redoing it, but we couldn’t justify the expense."

He estimated repairs would have cost nearly $1 million.

Dellinger said he came up with the idea of offering the former mansion to the Catawba Fire Department for a training exercise. “I figured it was a way to help the fire department out," he said.

There are no plans to reschedule the burn, Robinson said.

Before the burn was canceled, Mayfield posted his thoughts on Twitter: "Hate 2 see our previous residence burned down however, I've always loved a good bonfire. Out of the ashes a Phoenix will rise."

12/13/13 A million dollar mansion once owned by former NASCAR driver Jeremy Mayfield will be burned to the ground this weekend. Mayfield was evicted from the property last year after financial troubles stemming from a failed drug test in 2009 that banned him from racing. Channel 9 reporter Dave Faherty was the only reporter allowed in the house that at one time was valued at $1.8 million. The 12,000-square-foot house isn't worth that anymore and by Saturday afternoon, much of it will be gone. Everything in the seven-bedroom, seven-bath house is stripped down from the windows to the wiring.

Neighbors said Mayfield tried to renovate the home, but when he was banned from racing and arrested for possession of meth and stolen property work on the home came to an abrupt halt. Catawba Fire Chief Donald Robinson will oversee the controlled burn. He said the new owners no longer want the home that is worth just over $300,000 dollars. Burning it will take it off the tax books while providing training for firefighters in the county. Mayfield told Channel 9 he has no plans to watch the home burn. Mayfield is scheduled to go back before a judge early next month where he faces several felony charges.