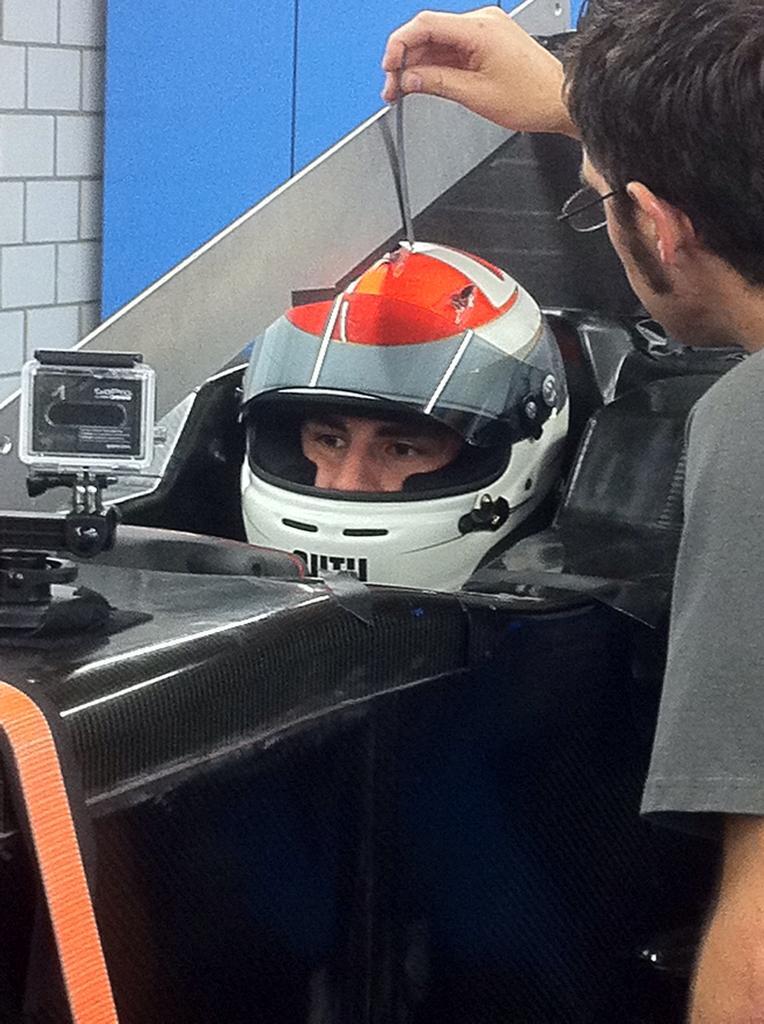 Raikkonen meets new engineer at Maranello
(GMM) Kimi Raikkonen has made his first appearance since undergoing back surgery a month ago.

The Finn, who sat out the last two races of his Lotus career, made a visit to Ferrari's Maranello headquarters on Tuesday, where he met up with his new race engineer, Antonio Spagnolo.

It will be a tough gig for Italian Spagnolo, with 2007 world champion Raikkonen famous for his radio impatience during grands prix — his 'Leave me alone, I know what I'm doing' spiel is now legendary in F1 circles.

With Raikkonen replacing the Williams-bound Felipe Massa, it has been a period of significant change at Ferrari.

And Allison said Ferrari's recent work on updating its wind tunnel and simulator technologies will pay off.

"Now we can say we have moved on from being maybe the fourth or fifth team in terms of the tools we have, to once again being at the cutting edge and everything is in place to open up a new Ferrari era," he said.

Pirelli's 2014 tires are slower – report
(GMM) Pirelli's new range of tires for 2014 is more conservative, according to the whispers from private testing in Bahrain.

A three-day, Pirelli-organized test in the island Kingdom kicked off on Tuesday, with Red Bull, Ferrari, Mercedes and Toro Rosso in attendance with their 2013 cars.

The testing of next year's tires, which will have to handle the much-higher torque of the new turbo engines, is taking place behind closed doors, and lap times and details are not being disclosed.

But Italy's Autosprint said: "The general indication is that they (the tires) are slower.

"Even with the same (2013) cars, the lap times are expected to rise, because the tire supplier is taking a more prudent approach."

Pirelli had a tumultuous 2013 season, characterized by the tire-exploding British grand prix and constant complaints about questionable durability and quality.

Autosprint said F1's official tire supplier has taken "dozens" of compound and construction combinations to Bahrain, but they all have one thing in common — the internal Kevlar belt.

"The experiment with steel belts, which gave so many problems at the beginning of 2013, is over," the report added.

Lotus admits Raikkonen still owed money
(GMM) Kimi Raikkonen has still not received all of the money he is owed by Lotus.

Towards the end of the season, and just before he set off for back surgery that meant he missed the last two races of 2013, the Finn revealed he has not been paid "one euro" by the Enstone based team this year.

Raikkonen said he almost called a halt to his Lotus career before the race in Abu Dhabi, saying at the time: "I came here only because hopefully we found an understanding on the certain issues we have been having."

But then he missed Austin and Brazil, ostensibly only because of his back surgery.

Team owner Gerard Lopez, whose Lotus outfit has been waiting for a crucial buy-in deal by the investment group Quantum, has now revealed that Raikkonen is in fact still owed some money.

Asked if Lotus has paid the Ferrari-bound Finn in full, he is quoted by Finland's MTV3: "Not entirely.

"Some of it, yes, we reached an agreement on the payment in Abu Dhabi," added Lopez.

It has been reported that Lotus remains deeply in debt, with some employees and suppliers going unpaid.

Lopez acknowledged: "There have been delays. But the amounts that I have heard (in the media) are completely ridiculous.

"I will not go into detail, other than to say that the amounts we owe are not big. We will pay, just as we always have done," he added.

Dennis would not block Alonso's McLaren return
(GMM) McLaren supremo Ron Dennis has suggested he would not step in to prevent Fernando Alonso from returning to the British team.

With the Woking based team looking ahead to its new era with works Honda power from 2015, boss Martin Whitmarsh has made no secret of his desire to see Alonso at the wheel.

But when Dennis was still on the pitwall in 2007, he and Alonso fell out spectacularly, with the two-time world champion splitting from the team after just a single, tumultuous season alongside Lewis Hamilton.

So with Alonso showing signs of being unhappy at Ferrari this year, and now paired with Kimi Raikkonen for 2014 reportedly against his wishes, the 32-year-old might be looking for a new team for 2015 and beyond.

Dennis, 66, while no longer in charge of F1 matters, remains the McLaren Group chairman, although reportedly with a non-executive status at present.

When asked specifically about Alonso, Dennis told the BBC: "One has to recognize the first objective of any grand prix team is to win races.

"Whatever obstacles sit between a team wanting to win and winning, be it engineering, fiscal or human issues, you resolve them. You never say never," he added.

Sutil has seat fitting in 2014 Sauber
(GMM) After spending his entire career to date with Force India, Adrian Sutil on Wednesday began his next F1 chapter.

"Look who we found getting comfortable in his seat," the Swiss team Sauber said on Twitter, adding a photo of German Sutil, 30, at the wheel of the 2014 car.

Sutil, who began his career in 2007 with Force India's former guise Spyker, was at Sauber's Hinwil headquarters for a seat fitting in the new C33, which has already passed the FIA's static and dynamic crash tests.

The photo of Sutil can be seen at https://pbs.twimg.com/media/BbwacMRIIAAGF3U.jpg:large

It is not Sutil's first visit to Hinwil. Team boss Monisha Kaltenborn said he actually visited "at the end of September to have a look at the infrastructure".

"Although I have known for a while where I wanted to go," Sutil added, "in the end the negotiations took a bit longer than planned."

And he told F1's official website this week: "I felt that it was time for a change and we worked hard for it for months to make it happen."

Eddie Irvine: Formula 1 is now embarrassing
Eddie Irvine is one of those blokes whose reputation precedes him. To some he'll always be the motormouth playboy forever stirring it up.

The man from Conlig in County Down has never shied away from that image.

The reason? He doesn't give a hoot what you or I think about him.

Great way to be.

Refreshing too in a world where everybody seems to care what everybody else thinks about them.

Irvine's one of Northern Ireland most famous sportsmen who raced with the best of them for a decade in the ruthless and unforgiving arena of Formula One, coming agonizingly close to World Championship glory.

Maybe it's because of the way he is perceived, but it's my view that in Northern Ireland Irvine has never got the credit he deserved for his achievements.

I ask him about this.

The 48-year-old's brutally honest answer: "I didn't do it for anyone else. I did it for myself. I wasn't expecting lots of praise for doing things for myself, so that has never bothered me."

We're sitting in the Eddie Irvine Sports Complex in Bangor ahead of the announcement of his recent purchase of the long-standing local business 'Race School Ireland'.

Eddie's dad, Edmund, is also here. We chat about namesake Martyn Irvine, the Newtownards World champion cyclist and the craic is good.

Eddie's relaxed. He spends most of his time in warmer climes like Miami these days, but still feels at home in our winter cold. Son and dad are at ease with one another.

I've been told in the past about how difficult Eddie can be. Not in my experience. He's charming company and fun. I like the guy.

And in terms of an interviewee, he's gold dust. Straight talking and searingly up front, Irvine shoots from the lip and if he annoys or angers others along the way, so be it.

Truth be told Formula One could do with someone like him today.

Earlier this month the sport's governing body FIA decided to award double points at the final race of the season from 2014 in an attempt to heighten interest in the World Championship, which has become a romp for Sebastian Vettel in recent years.

Irvine's view: "I think Formula One has lost its way. This latest rule of double points for the last race is insanity. That actually made me realize I am not going to watch another race until that rule gets kicked out. That is just embarrassing. It really is. They should be ashamed of themselves.

"I just think the people involved in these decisions have lost the plot. They have no understanding of reality and the people who are in there have been in too long. They have blown up the history of the sport by changing the points, changing the qualifying and now double points for the final race!"

In disbelief he starts laughing at the thought of it.

"It's ridiculous, I've never heard such a joke in all my life. Talk about tinsel town bulls***!"

One of racing's most compelling characters in the last 20 years, Irvine's first experience of the glitz and glamour of F1 came in 1993 with Eddie Jordan's team.

Controversy followed him around. He had run-ins with authority and other drivers, including the great Ayrton Senna.

Irvine got himself noticed on and off the track.

In 1996 he joined Ferrari in a dream move to partner Michael Schumacher. Very much the number two, it wasn't until 1999, with the German out of action due to a broken leg, that the Ulsterman came into his own. He won four races and took the Drivers Championship down to the last race of the year, eventually finishing as runner-up just behind Mika Hakkinen.

In 2000 he switched to Jaguar and a couple of years later he left F1 behind.

"It was a great time in my life and I had a blast, but I have as much fun now as I ever had and I'm more in control of my destiny than I was then," he says.

"Now that I'm involved in many businesses and I travel a lot you see how unimportant Formula One is, but when you are on the inside everybody thinks it is the most important thing in the world.

Family is important to Eddie, in particular his daughter Zoe who attends Regent House in Newtownards, just as he did many years before.

"I get home quite a lot. My daughter is here, she goes to Regent House. Maria, her mum, has done a fantastic job and Zoe has turned out great," he says.

"She studies hard, knows what she has got to do and seems to have good staying power for the things she starts."

This is not a motormouth playboy talking, just a proud dad. Belfast Telegraph