There is good news and bad news concerning the current state of the IndyCar Series on television, according to a post penned by Andrew Maness, editor ofnascarnomics.com.

The good news is that IndyCar TV ratings have held largely steady over the past four seasons while airing on ABC and the NBC Sports Network (formerly VERSUS). Another positive is that Maness predicts a considerable ratings increase when NASCAR joins NBCSN for the 2015 season.

The bad news is that IndyCar appeared to jettison a large portion of its already declining audience when it left ESPN after the 2008 season. Furthermore, the post also provided data that suggests that IndyCar lost over a quarter of its audience anytime that it had direct competition with a NASCAR race.

The following is a list of Maness' findings and the charts that backed up his data. Click the photos for a higher resolution copy.

Races earn household audiences that are roughly 6% larger when airing on networks that hold a major contract with NASCAR. As such, IndyCar should expect an augmented number of viewers when NASCAR enters NBCSN's line-up in 2015. Interestingly enough, however, when an IndyCar race airs directly opposite of a Cup Series event; the open-wheel series loses a quarter of its typical audience. Events also suffer significantly when competing for viewers with the NFL and college football (30% and 17%, respectively).

Oval facilities listed as one-mile or greater in length earn the highest television ratings among track configurations, all other variables held constant. Shorter ovals draw a similar audience, while street and road courses result in ratings reductions of 10% and 18%, respectively. An event held on a street circuit that draws a 0.2 television rating, for example, would increase to 0.3 (depending on rounding) if the race were held on a large oval, ceteris paribus.

Ms. Danica Patrick's presence in the IndyCar Series was meaningful. Her participation garnered home audiences that were 13% greater than events in which she did not appear. Ms. Patrick's finishing in the top 5 resulted in a ratings boost of 25% for the following race, all other terms held equal. 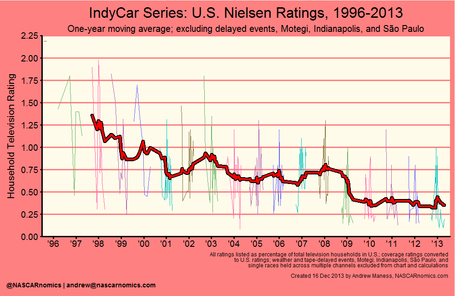 The destruction of IndyCar Racing once the IRL was formed 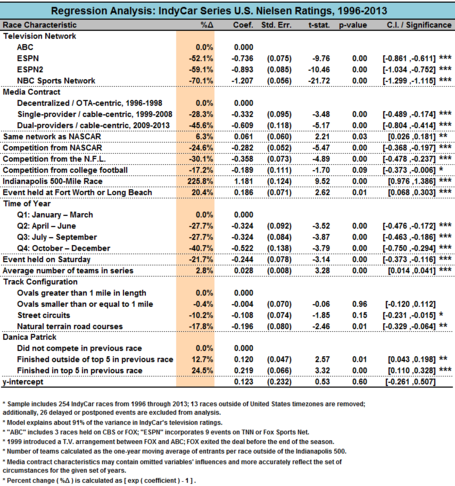 So what does this mean moving forward?

IndyCar condensed its schedule ahead of the 2014 season, running largely uninterrupted from March-to-August. If previous trends hold true, this factor alone will not make much of a difference. The new status quo has the potential to thrive once NASCAR arrives in 2015 but that's more dependent on the strength of the network more than the schedule.

With already meager attendance numbers continuing to drop at IndyCar events, the league may be better served in becoming a stronger television brand and finding some way to get back into the business of airing high-speed oval events.

But if the right promoter was willing to take a chance and invest in IndyCar oval racing in the short term, that group may be set to reap the benefits once NASCAR arrives by 2015. SBNation