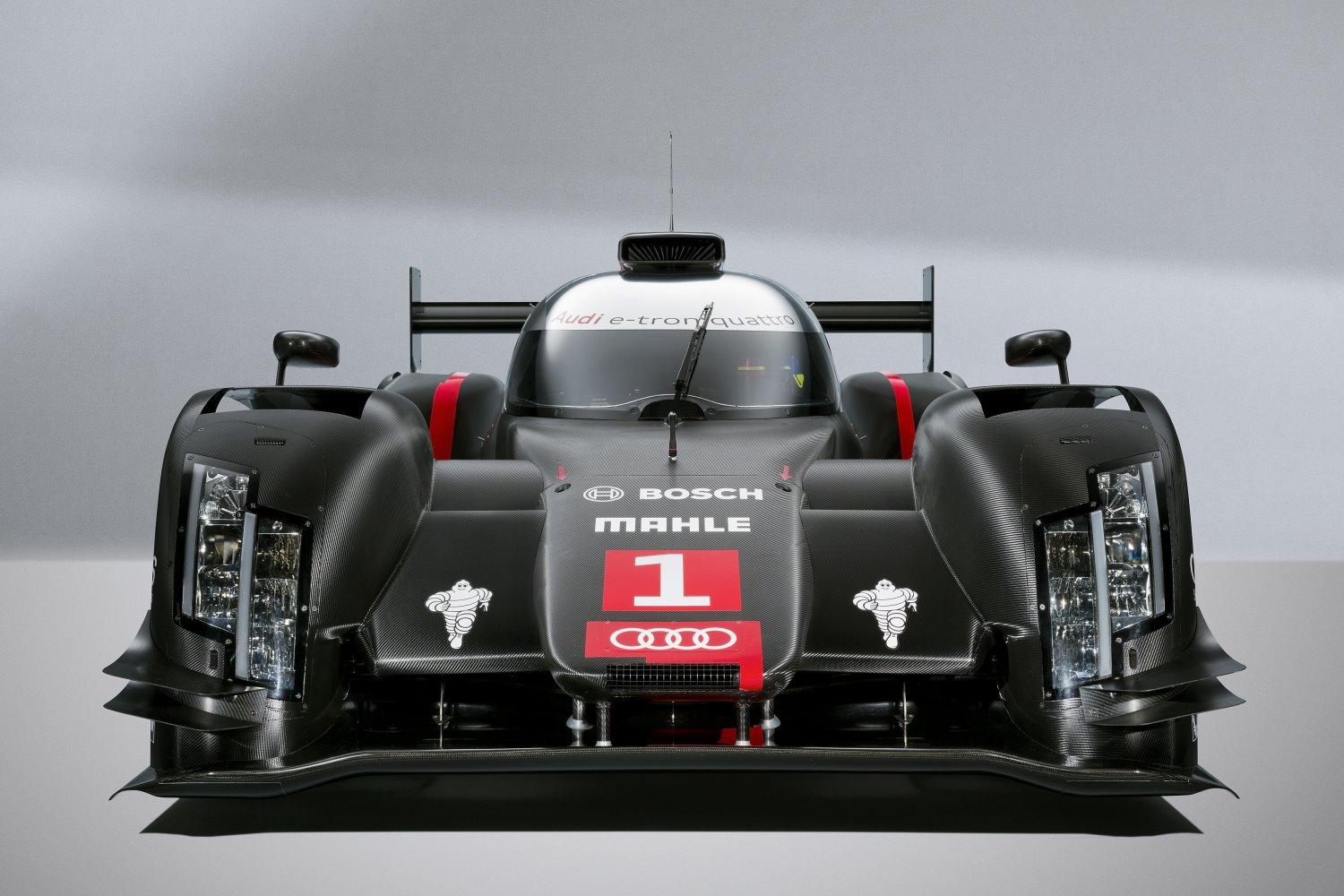 The name remains unchanged but the technology is completely new. In the 2014 season, Audi is aiming to achieve the hat-trick in the FIA World Endurance Championship (WEC) and another success in the Le Mans 24 Hours with a Le Mans prototype that has been redeveloped from scratch – combined, yet again, with technical innovations that are relevant to the production models of the brand with the four rings as well.

The 2014-generation Audi R18 e-tron quattro is the most complex race car ever built by Audi. At first glance, the new hybrid sports car appears like a continuous further development of the World Championship winning car and Le Mans winner of the past two years. However, due to the new LMP1 regulations that will come into effect in 2014, Audi Sport factually redeveloped every single component.

“The next Audi R18 e-tron quattro represents a completely new generation of Le Mans prototypes," explains Head of Audi Motorsport Dr. Wolfgang Ullrich. “The principles of the LMP1 regulations have fundamentally changed. The idea behind this is to achieve similarly fast lap times as in the past with considerably less energy. Making more out of less: a forward-thinking approach."

Chris Reinke, Head of LMP at Audi Sport, talks about a ‘revolution in thinking.’ “A fundamental approach to motorsport is being abandoned. Instead of power output, energy consumption will be subject to limitations – this is in line with the spirit of our times and opens up great technical freedoms to the engineers. In 2014, we’ll be seeing a wide variety of concepts on the grid at Le Mans."

The basic elements of the Audi R18 e-tron quattro’s new configuration were defined back in 2012 and the design of all the single components started at the end of 2012. The new LMP1 sports car was rolled out in the early fall of 2013, followed by track tests of the most recent R18.

In the new Technical Regulations, a large number of principal definitions, which concern the powertrain, body dimensions, safety and aerodynamics, were re-determined. With the new R18, Audi Sport has opted for a similar concept as in the past – albeit with innovative detailed solutions and an additional hybrid system. The key details:

Never before has a race car been powered by technology as complex as the one used in Audi’s new LMP1 sports car. The TDI engine, which sets the benchmark in terms of efficiency, remains a time-tested and important element of the overall concept. The further developed V6 TDI unit of the Audi R18 e-tron quattro makes a crucial contribution to the car’s compliance with the energy specifications of the regulations. The new R18 has to do with up to 30 percent less fuel than its immediate predecessor.

In addition to the internal combustion engine, the powertrain concept, for the first time, features the integration of two hybrid systems. As in the past, a Motor-Generator-Unit (MGU), during braking events, recovers kinetic energy at the front axle, which flows into a flywheel energy storage system. For the first time, the turbocharger of the internal combustion engine is linked to an electrical machine, which makes it possible to convert the thermal energy of the exhaust gas flow into electric energy – for instance when the boost pressure limit has been reached. This energy also flows into the flywheel energy storage system. When the car accelerates, the stored energy can either flow back to the MGU at the front axle or to the innovative electric turbocharger, depending on the operating strategy.

The overall design of these systems and their direct impact on engine and powertrain management require highly complex coordination and tuning work. Audi Sport initially performed theoretical analyses and simulations, followed by rig testing and, since October, by track tests. The options available to the drivers and engineers as a result of the new technology are now more extensive than ever before.

Significantly changed conditions for the aerodynamicists

New freedoms, accompanied by greater restrictions – this is how the new framework conditions for aerodynamics can be put in a nutshell. A few examples: The 10 centimeter slimmer body of the new LMP1 sports car means that the front of the R18 becomes mathematically smaller – which is an advantage. The bodywork accommodates slimmer wheels, which, in turn, reduces aerodynamic drag. This is contrasted by other innovations that do not provide any advantages in aerodynamics. At 1,050 millimeters, the race car has to be 20 millimeters higher than before, and larger cockpit dimensions are prescribed as well. This leads to less favorable aerodynamics. The lower overall width of the car results in a slimmer underfloor. In addition, it features a completely different shape in the area of the cutouts for the front wheels. Consequently, the area that can produce downforce becomes smaller. With respect to designing the front end, the engineers enjoy new freedoms. Instead of a diffuser, a genuine front wing with a flap may be used for the first time. This promises aerodynamic advantages and lower costs, as this part of the bodywork will lend itself to easier modification to suit the various race tracks. In the past, it was necessary to produce different bodywork assemblies.

On the other hand, greater limits have been imposed on the aerodynamic design freedoms at the rear end. Use of the exhaust gas in the area of the rear diffuser, as in the case of the 2013-generation Audi R18 e-tron quattro, is now prohibited.

Even in the past, LMP1 sports cars with their closed CFRP cockpit structure were regarded as one of the safest race car categories of all. Two severe accidents of the R18 at Le Mans in 2011 saw the Audi drivers get off lightly. But this is no reason to stop. The rule-makers have continued to improve the safety of the latest race car generation by imposing numerous discrete requirements.

The new monocoque has to resist higher loads. At the same time, it is reinforced by additional layers of fabric, which are hard to penetrate in the case of a concentrated impact. This reduces the risk of intrusion by pointed objects in accidents.

For the first time, wheel tethers are prescribed. They connect the outer assemblies of the front wheel suspensions with the monocoque and the ones of the rear suspensions with the chassis structure. Each of the two tethers required per wheel can withstand forces of 90 KN – which equates to a weight force of nine metric tons. Another new feature is a CFRP structure behind the transmission – the so-called ‘crasher’ – which absorbs energy in a collision.

This is another example of the considerable challenges faced by the Audi engineers, as all these innovations increase weight, in addition to the second hybrid system. Audi’s previous Le Mans prototype weighed 915 kilograms. But in the future the car’s weight may be reduced to 870 kilograms – which means that Audi’s ultra-lightweight design technology reaches a new dimension.

A large number of further innovations – for instance in the areas of vision and interior ergonomics – characterize the new Audi R18 e-tron quattro that will be making its racing debut in the 6-hour race at Silverstone (Great Britain) on April 20, 2014. The highlight of the FIA World Endurance Championship (WEC) will be the Le Mans 24 Hours on June 14/15, 2014. The aim is clear: Audi is setting its sights on continuing to maintain the leading role it has enjoyed in sports prototype racing since 2000 and on again demonstrating ‘Vorsprung durch Technik’ at Le Mans.

International partners on board

The new Audi R18 e-tron quattro will be on the grid together with strong partners in the 2014 season. For the first time, the Brazilian company Aethra Sistemas Automotivos and the Swiss watchmaker Oris support the title defense project. The two new partners complement Audi Sport’s international portfolio in the sports car program, which includes Akrapovic, Alpinestars, Bosch, Castrol, ITK Engineering, Mahle, Michelin and OZ.