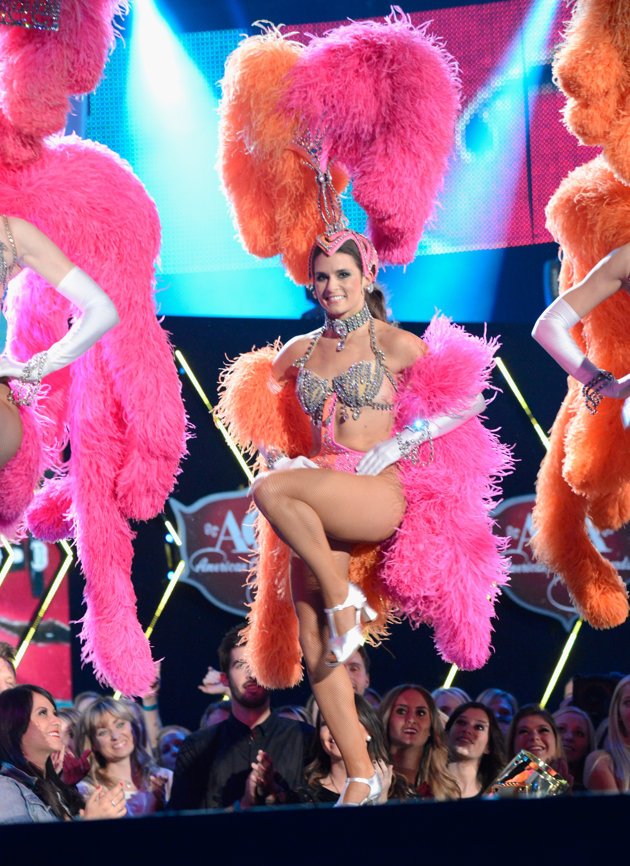 In her second award-show appearance in the last week, NASCAR driver Danica Patrick co-hosted the American Country Awards with country singer Trace Adkins. During the show Patrick dressed as a Vegas showgirl and performed on stage with other dancers. She even joked about a wardrobe malfunction.

At one point, Patrick was reading the teleprompter very fast and Adkins said, "Easy there Speedy, you don't have to read everything as fast as you possibly can. I'm still having a little trouble adjusting to you." Patrick replied, "It's alright Trace, I'll slow down every once in awhile and let you catch up."

Later in the broadcast, Adkins walked on-stage wearing a large version of Patrick's GoDaddy neon green racing firesuit and she was wearing a large cowboy hat. Adkins said, "Since you've crossed over into to my world of country music I thought I'd cross over a little into yours." Patrick replied, "So you're a cross-dresser?" Adkins: "No, not that there's anything wrong with that." "American Country Awards," Fox

Okay, we all watched the Fox Sports live television coverage of the December 6th NASCAR Sprint Cup Awards Banquet from Las Vegas. We all watched the master of ceremonies, comedian Jay Mohr, toss a couple of one line jokes at NASCAR's high profile couple Danica Patrick and Ricky Stenhouse Jr. We all saw the highly annoyed expressions on the faces of the racing couple. From that moment came miles of computer pages that claimed Patrick needed to relocate her sense of humor. Needless to say, it also set the social media on fire.

However, four nights later, Danica Patrick was still in Las Vegas where she co hosted the annual American Country Awards with singer Trace Adkins. One would think that would have been a rather daunting challenge because Adkins is as well known for delivering sarcastic one line zingers as he is for singing a country song.

If Patrick was nervous about co hosting this two hour, live broadcast, awards show she didn't show it. She held her own and often delivered some very funny moments. In fact, she delivered some one liners that was actually funnier than what comedy veteran Jay Mohr delivered at the NASCAR awards.

Certainly one of those highlights occurred when Patrick joined a troupe of Las Vegas showgirls in a dance routine while wearing a traditional Vegas costume that was, to say the least, eye popping. That alone is really nothing new. We've seen that numerous times during her memorable television commercials for long time sponsor Go Daddy. She also deserves credit for holding her own while performing the dance steps.

However, it was her comments after the dance number that lit up the social media. Patrick walked up to a microphone stand and said "that was a lot of fun, I've always wanted to do that". Then briefly placing her hands over her "attributes", she said "the good thing about me is there's no chance of a wardrobe malfunction. There's not much to malfunction. I hope that little bit didn't fall flat."