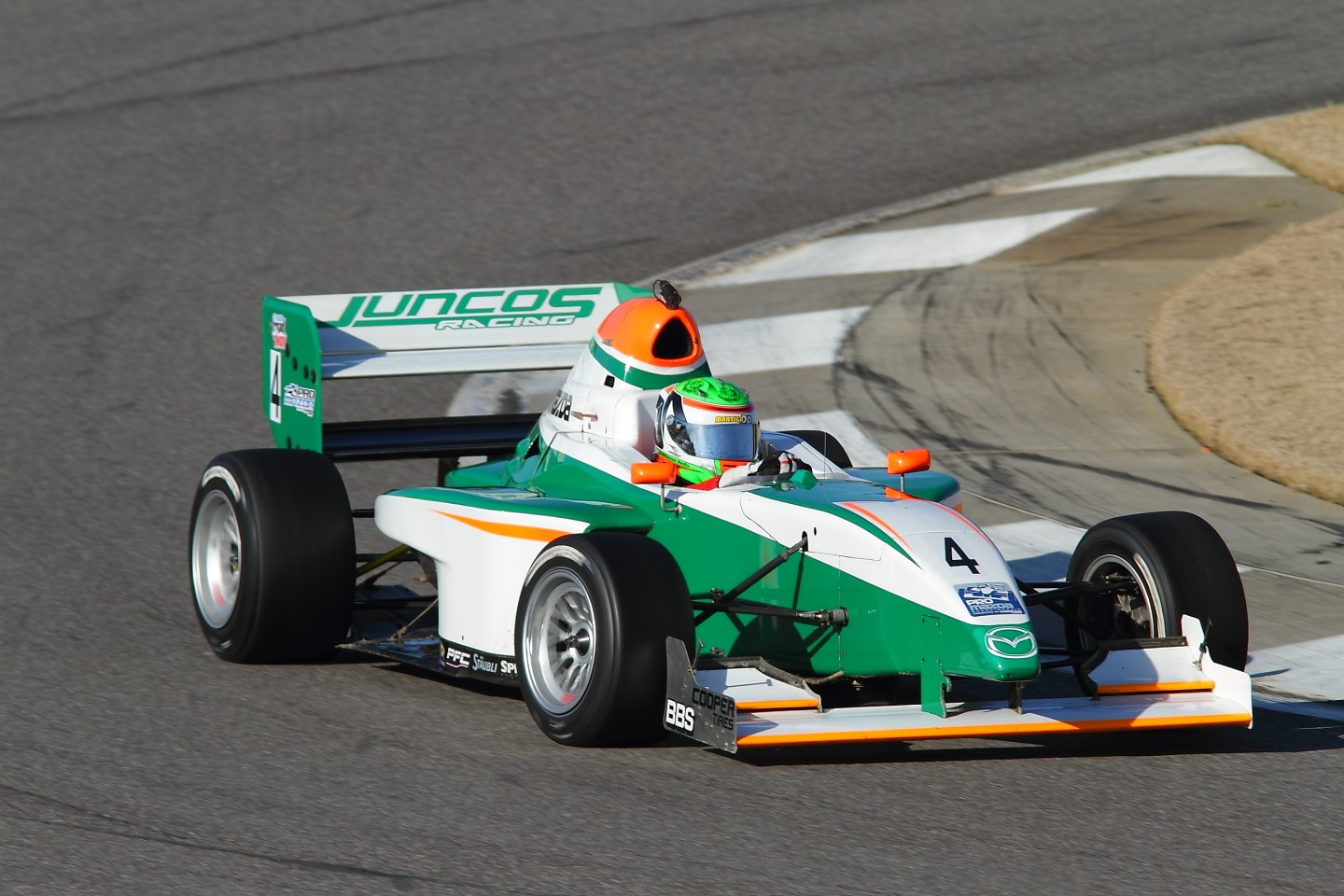 Judging by the results of the past two days at the Chris Griffis Memorial Mazda Road to Indy Test, the future looks extremely bright for the rejuvenated Pro Mazda Championship Presented by Cooper Tires. A different driver topped the timing charts in each of the four sessions at Barber Motorsports Park, with 17-year-old series newcomer Alfonso Celis Jr., from Mexico City, Mexico, finally edging out returning Pro Mazda veterans – and 2013 race winners – Shelby Blackstock and Spencer Pigot with a best time of 1:20.490 (an average speed of 106.448 mph) around the undulating and challenging 2.3-mile road course. A total of 19 drivers took part in the test.

"I am very happy to be here at Barber," said Celis, who competed this year in the Formula Renault 2.0 NEC series, earning a season-best finish of third in the finale at Zandvoort, Holland. "We've had our ups and downs in some of the sessions but I am quite happy with the team and everything. It has been a good experience and I am still learning. The aerodynamics are very good. I am still getting used to it but the car is great, really fast."

Blackstock, 23, from Nashville, Tenn., was fastest on Monday at 1:22.240, driving for the defending champion team, Andretti Autosport, while Pigot, 20, from Orlando, Fla., topped the charts Tuesday morning with a time of 1:21.300 for 2010 championship-winning team Juncos Racing. Blackstock and Pigot, who shared the victories at Canadian Tire Motorsport Park this summer, had to be content with second and third in the final, decisive session yesterday afternoon on 1:20.698 and 1:21.034, respectively.

"The test has gone really fantastic for the Andretti guys," said Blackstock. "The cars have been very, very fast and the track is a lot of fun. Unfortunately, it is negative 30 degrees out so that's the only downside. When you get out of the car you almost fall over because your feet are numb. I am looking forward to the 2014 season. I'm very excited because we had a good finish of third in the championship this year and hopefully we can come back and go for the championship."

"I am having a lot of fun working with the guys from Juncos," added Pigot. "It's going well and hopefully we can put a deal together and come back to the series next season. It's not easy so I have a busy off-season ahead."

Teenagers Kyle Kaiser, from San Jose, Calif., and Jose Gutierrez, from Monterrey, Mexico, rounded out a successful test for Juncos Racing by setting the fourth and sixth-fastest times. The pair were split by former F2000 Championship Series front-runner Kyle Connery, from Vero Beach, Fla., who also impressed with JDC MotorSports.

Garett Grist, from Grimsby, Ont., Canada, in the second Andretti Autosport entry; Robert La Rocca, the 2012 F2000 champion from Caracas, Venezuela, who was fastest of all in the wet first session on Monday morning for M1 Racing; Nicolas Costa, from Rio de Janeiro, Brazil, who joined the test only Tuesday morning with JDC MotorSports; and teammate Michael Johnson, 21, from Flint, Mich., rounded out the top 10. Johnson's performance, a best lap of 1:21.847, was especially noteworthy given that he is paralyzed from the chest down following a motorcycle racing accident at the age of 14.

"I am really excited to continue everything that I have learned from the 2-liter side and move on to Pro Mazda," said Johnson, who raced in USF2000 this year. "This car seems like it suits my driving style a lot better. It is a lot of fun to drive. This track is awesome and I am having a really fun time. I can't wait until we actually start racing."

Cooper Tires USF2000 Championship Powered by Mazda champion Scott Hargrove, 18, from Vancouver, B.C., Canada, and Neil Alberico, from Los Gatos, Calif., who finished second in the title-chase with a series-high six wins, placed 11th and 12th on the final charts. The test marked the Pro Mazda debut of Cape Motorsports with Wayne Taylor Racing, which has won the three of the last four USF2000 titles.

"The move up to Pro Mazda has been fun for sure," said Hargrove. "It is cool to experience more power and the bigger tires, bigger brakes and sequential shifting and everything that you hear about. It is definitely a fun car to drive. It has been a big learning experience and that is really what this test is all about – new guys coming in and learning how to drive these cars at each stage of the ladder. Big props to everyone that puts this on and I am glad that I can be here."