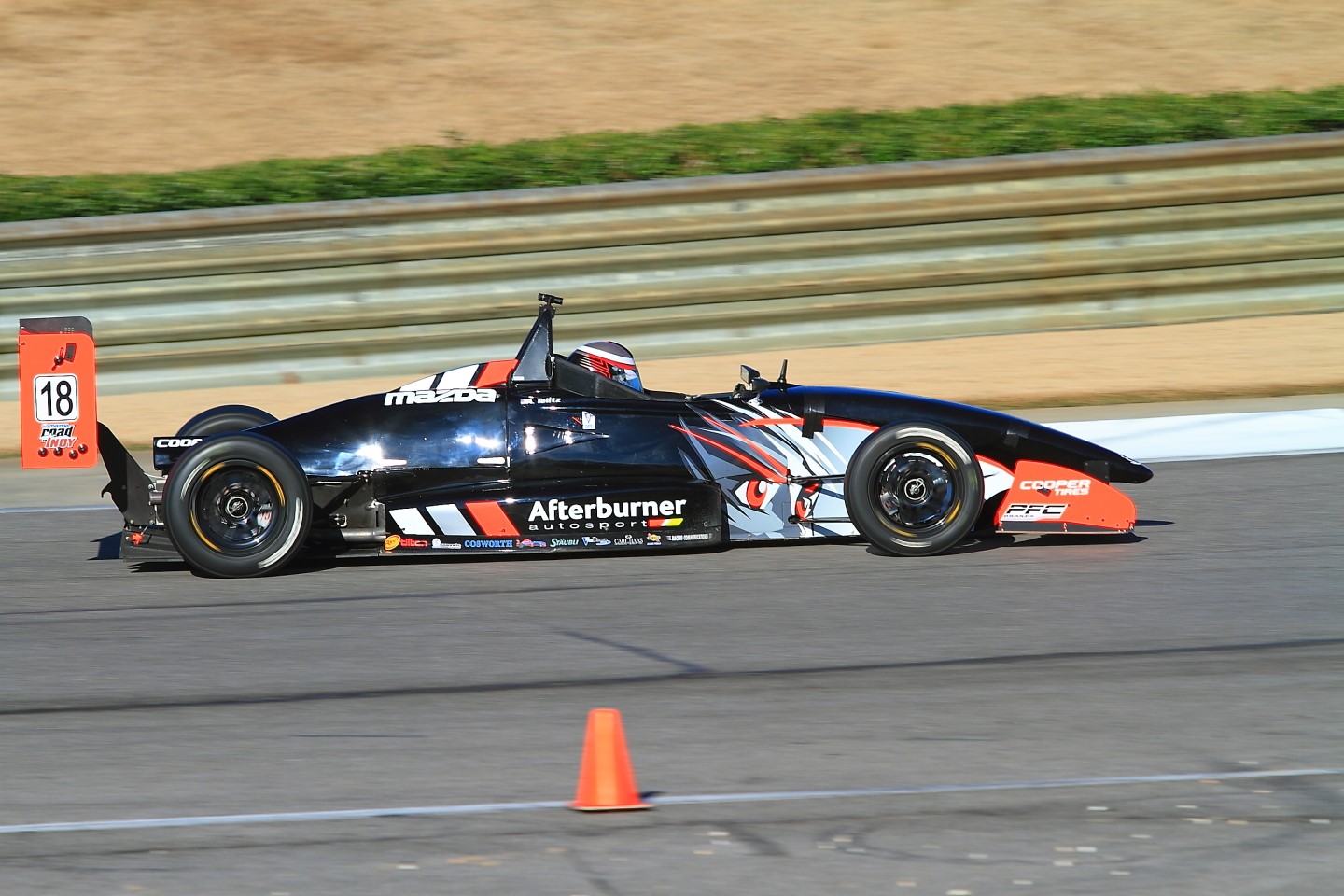 Telitz, from Birchwood, Wis., who will celebrate his 22nd birthday on Friday, gave himself an early present by posting the fastest time of the test yesterday afternoon. The recent winner of the Skip Barber Race Series Scholarship Shootout, earning himself a MAZDASPEED Driver Development Scholarship to graduate into USF2000 in 2014, served notice of his intentions by leaping to the top of the charts in the closing minutes, lapping the challenging 2.3-mile Barber Motorsports Park road course in 1:23.283 for an average speed of 102.878 mph.

"The test was great," said Telitz. "I did both days here with different teams. I ran with ArmsUp the first day. That was great, getting my feet wet in the series and finding out how things work and getting my feet literally wet in the rain. Things were good yesterday. We went pretty quick in the rain and the semi dry. Today I tested with Afterburner and in the morning session, which was pretty wet, we did alright and tried some things. This afternoon, I just went for it. I finally had quite a bit of confidence in the car, building up speed and went P1 in the last session so that was awesome. There's lots of work still to be done, decisions for what team to go with, so we will see. I am really looking forward to 2014."

Second fastest at the test was another impressive rookie, Jake Eidson, driving for two-time defending series champion team Cape Motorsports with Wayne Taylor Racing. Eidson, 18, from Littleton, Colo., was quickest of all at the end of the first day at 1:25.292, and duked it out with fellow Skip Barber graduate Telitz today before having to settle for a best time of 1:23.381 – a scant 0.098 behind his rival. In addition to being a three-time Skip Barber Race Series champion, Eidson won this year's F1600 Championship Series, also driving for the Cape Motorsports team, and shone recently in England where he represented the Team USA Scholarship.

"It was my first time here at Barber and I have only tested with the Capes a few times, but so far it has been going really good," said Eidson. "I think we have a lot to build off now and get the ball rolling."

Yet another USF2000 rookie, Nico Jamin, from Rouen, France, set the third fastest time for Belardi Auto Racing with a best lap of 1:23.598. Jamin, a graduate of the North European Formula Renault 2.0 series who turned 18 last week, headed a strong four-car Belardi effort with a best time of 1:23.598, edging out teammate Michael Epps, from Hemel Hempstead, England, by just 0.063s.

"I had a really fun time at the Chris Griffis Memorial Test," said Cindric. "I'm with a new team and we learned the car and the track and got some laps in the rain. It was my first time in the wet in these cars for a bunch of practice sessions and I ended up P3 which I was pretty happy with. We were fast in the wet and fast in the dry, so fast overall."

Furuseth, who won the USF2000 National Class Championship in 2012 and secured his best results to date in the Championship Class, a pair of second-place finishes, in the final round of this year's series at Reliant Park, Houston, posted the fastest time of all in each of the two sessions that were held in wet conditions, both yesterday morning and on Monday.

"It has been a really good test and it has been good testing with JDC," said Furuseth. "P1 in two sessions out of four is pretty good. The car was very good in the wet. We struggled a bit in the dry in the first session but we got the car to be good in the second one so we are close to a very good setup. Overall I am very happy with how the test went."

A total of 20 drivers took to the track over the two-day test, representing seven different teams.