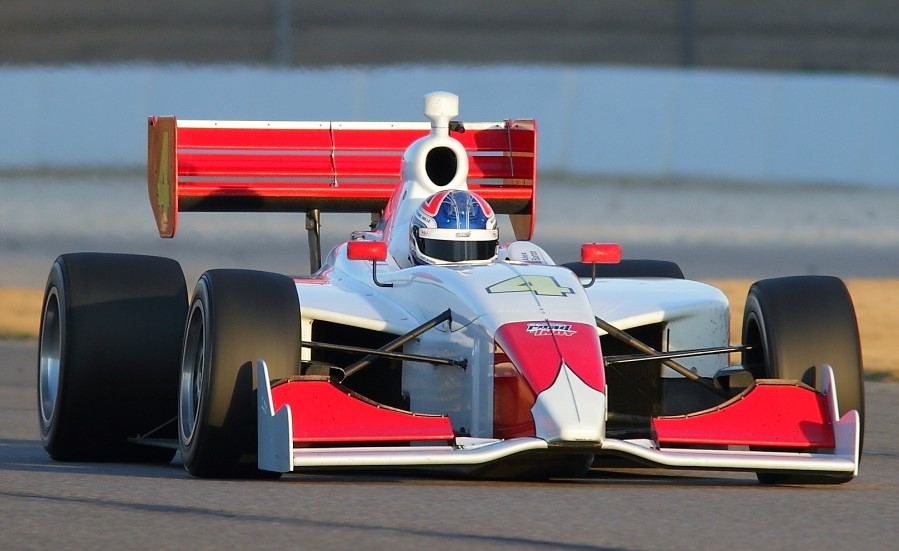 Alexandre Baron, from Narbonne, France, is developing a habit of causing upsets. The teenager who burst onto the scene in the Cooper Tires USF2000 Championship Powered by Mazda in September, winning on his debut at Mazda Raceway Laguna Seca, yesterday marked his very first appearance in an Indy Lights Presented by Cooper Tires car by posting the fastest time of the Chris Griffis Memorial Mazda Road to Indy Test at Barber Motorsports Park.

Baron lost no time in making his presence felt in the #4 13th Avenue entry. He set the second fastest time in both Monday sessions, headed in the first one by Matthew Brabham and in the afternoon by Brabham's Andretti Autosport teammate, Zach Veach, but led the way in both of yesterday's outings. His best time of 1:15.726 was faster than the record race lap of 1:16.0858 set this past April by Veach.

"First of all, I would like to thank Belardi Auto Racing for giving me this tremendous opportunity to drive in Indy Lights," said Baron, who emerged unscathed from an incident on Monday. "It was an absolutely unbelievable experience. Even though the test is finished, I just want to drive again now! The car, everyone on the team was just perfect these two days. Unfortunately, I wasn't perfect Monday in the last session but that is the way it is. Now I am looking forward to another test with the team and we will work even harder to be the strongest team."

Veach, who posted the fastest lap on Monday at 1:17.877, improved to 1:16.026 in the faster final session, edging teammate Brabham who is stepping up into Indy Lights after winning the Cooper Tires USF2000 Championship Powered by Mazda and Pro Mazda Championship Presented by Cooper Tires in consecutive seasons.

"It's just been a little bit cold but things are going really well," said Veach, who finished seventh this year in his rookie Indy Lights campaign. "There are a lot of Indy Lights teams including us that are getting acquainted with the new Cooper tires. So far, I am really impressed with them. I think we made some really big improvements to be at the top of the time charts and everything is progressing really well and I am really excited to be here with Andersen Promotions and starting the new year with a lot of people who I started my career with back in 2006."

"It's been a lot of fun and finally the sun came out," added Brabham, who made a couple of mistakes before turning a best lap of 1:16.234 to rank third fastest overall. "There is not a cloud in the sky now but it was looking pretty hairy at the start. Monday it was pouring. I am still learning the car. It just bites you so much harder than the cars I have driven before. You have to really, really be on top of catching any moment you have before they get out of hand. I'm kind of struggling with that a little bit. I have been off track quite a lot of times. I just have to calm everything down and see how it goes."

Schmidt-Peterson teammates Jack Harvey, from Bassingham, England, a standout in GP3 Series competition this year, and Yann Cunha, from Brasilia, Brazil, who raced this year in Formula Renault 3.5, turned the fourth and fifth fastest times.

Michael Epps, from Hemel Hempstead, England, performed well after completing his USF2000 test program and hopping into a second Belardi Auto Racing entry for just the final session to record a best of 1:17.866. Pro Mazda graduate Lloyd Read, from Newport, Wales, rounded out the field on his Indy Lights debut with Bryan Herta Autosport/Jeffrey Mark Motorsport.