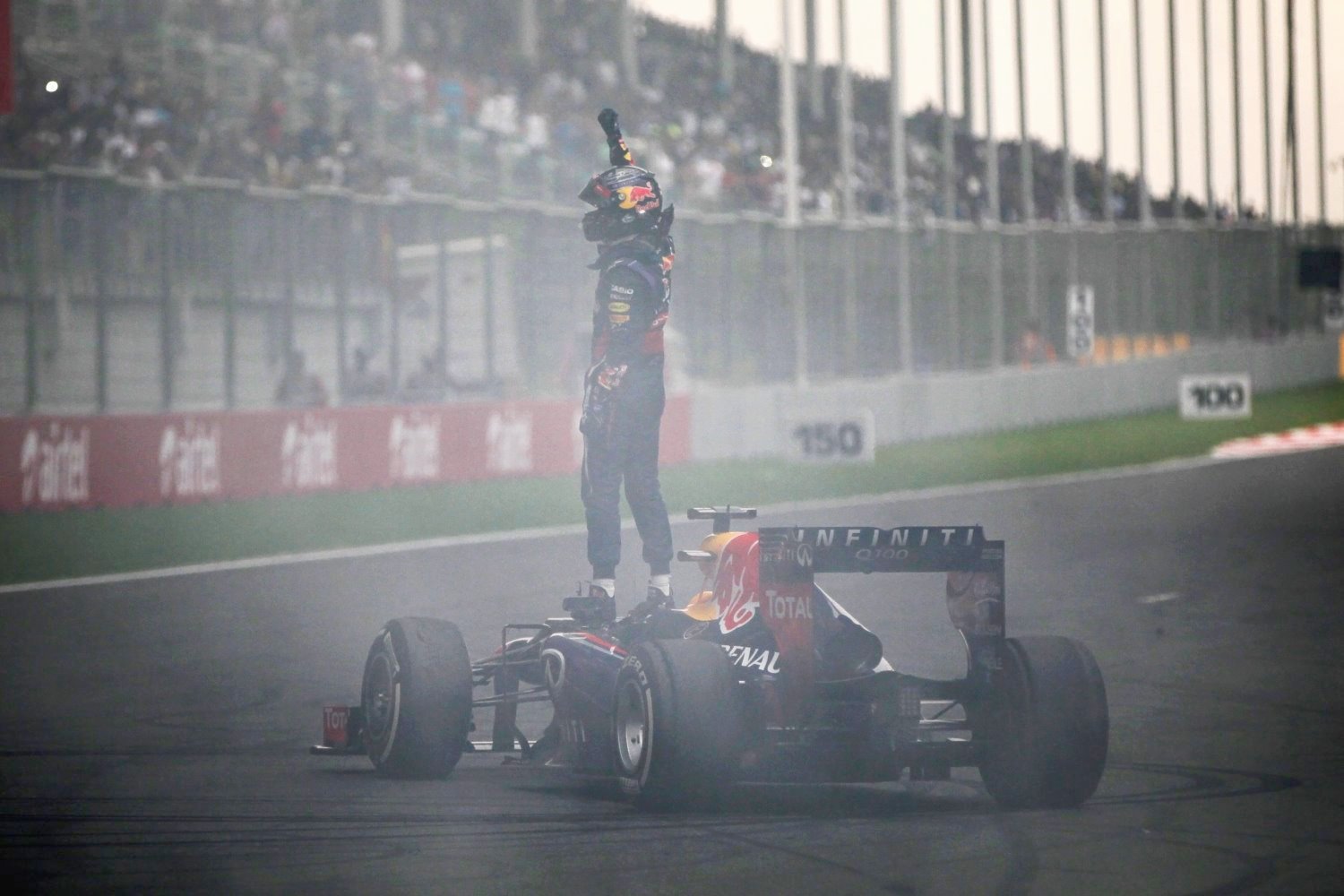 Force India still to name Hulkenberg's teammate
(GMM) Force India on Tuesday named only one of its drivers for the 2014 season.

As predicted, the Silverstone based team said its 2012 race driver, German Nico Hulkenberg, is returning to Force India next year after a single season with Sauber.

A press release said the 26-year-old had signed a "multi-year deal".

It appears there are three candidates to be Hulkenberg's teammate — 2013 incumbents Adrian Sutil and Paul di Resta, and the Mexico-backed McLaren refugee Sergio Perez.

"From all the names that are out there, I can work with anyone," Hulkenberg told Britain's Sky.

Perez appears to be the frontrunner, reportedly with EUR 10-15 million in backing to offer, with German Sutil more strongly linked with Hulkenberg's newly-vacated seat at the struggling Swiss team Sauber.

As he appeared in a London court for a case against his former manager Anthony Hamilton on Wednesday, di Resta admitted it is "very unlikely" he will be on the F1 grid next year.

"I think everyone will have their own opinion on it," he said on Wednesday, when asked about Lotus' signing of the PDVSA-backed Pastor Maldonado ahead of him.

"It's not the first time I've experienced something like this," Hulkenberg is quoted by the Express newspaper.

"I've lost a seat once in Williams, but to be honest I try to get my energy on the important subjects and take my career in the right way."

With the famous aerodynamicist Adrian Newey's Red Bulls having utterly dominated the last several seasons, the Italian marque Ferrari welcomed with delight the move to turbo V6 engines next year, after years of V8 power.

"Engine, gearbox, suspensions: these are also crucial, particularly for us."

Team test driver Marc Gene, however, argues that although the new rules are a big opportunity for Ferrari, Red Bull remains in pole position due to its dominant position for the past few years.

"There will always be continuity," Gene told the Spanish sports newspaper AS. "The cars will still be F1 cars, and many parts of the car will be the same.

"The engine, gearbox, KERS, turbo … the rear (of the car) is all brand new. The aerodynamics will be different," he added, "but there will be follow-on parts (from 2013) too.

"The team that wins the championship the year before always starts with an advantage, but maybe with less benefit (for 2014) than if there had been the same rules," said Gene.

Another element to consider for 2014 is that, with the radical transition from the 2013 to 2014 rules, teams that started work on next year's project the earliest will also have a bigger advantage than usual.

In this regard, it is believed that Mercedes – rumored to already have the best 2014 engine – has been working on its new car for longer than most.

"I don't think so," said Gene, "as they have been fighting for the constructors' championship with us right until the end.

"Red Bull has also been developing its car until very recently," he added. "I don't know if anyone will have a big advantage because of this."

The sport will adopt new 1.6-litre turbo-charged engines next years, while teams will also make greater use of energy recovery systems as F1 looks to improve its green credentials. There are also other revisions – to things like aerodynamics – and Brundle believe this all threatens Red Bull's run of supremacy.

“I'm expecting total calamity in the early stages of 2014 and it remains to be seen if that's entertaining or confusing, but I have no doubt that these brilliant engineers and designers will master the issues sooner than later," Brundle wrote in his most recent column on Sky Sports F1.

“I agree with Jenson Button, big changes can only hurt Red Bull given they have such an advantage, but no doubt the usual suspects with the biggest resource will get there first. I'm hoping that we won't have a three-tier Ferrari -Renault – Mercedes championship in whichever order for both power and efficiency, but it's possible.

“I've asked my trusted sources in the paddock and they just roll their eyes and throw their arms up in the air. There's a huge amount of work to do in a very short space of time."

Brundle also warned of a crisis in the sport given a lot of the teams are struggling to balance the books: “The midfield driver market should settle down in the next week or so," he added prior to confirmation that Pastor Maldonado will go to Lotus in 2014 and Nico Hulkenberg will re-join Force India.

“I've never seen anything like it frankly, and it doesn't bode well when the only team – Lotus – to consistently take the fight to Red Bull can't afford to chose its own driver line-up and take the best available.

“My alarm bells are going off for the general health of F1 and it needs urgent action, if not then a crisis, before it's back on track."

Vettel and the RB9, a winning combination
Sebastian Vettel has been named International Racing Driver of the Year and the RB9 handed the prize for Racing Car of the Year at this year's Autosport Awards in the UK, the fourth year in a row driver and team have been honored in the categories.

Seb, who took a record-equaling 13 grand prix wins in a single season in 2013 to win his fourth world title in a row, entered the auditorium in the company of dominant WRC champion Sébastien Ogier of the Red Bull VW team; later in the evening Vettel was presented with his award by Sir Stirling Moss.

"It is still very special for me walking down those steps; it is absolutely humbling," Vettel told autosport.com at the award ceremony, which took place in London on Sunday night.

"It has been four years coming here to a room full of motorsport people. I wouldn't mind another four. I know how much work goes into achieving that, and I get to pick this nice trophy up at the end every time."

The RB9 proved to be the team's most successful car yet with its 13 wins bypassing the dozen victories scored in 2011 with the RB7. The RB9 also took Seb and Mark Webber to 11 other podium finishes, 11 pole positions, 12 fastest laps and a grand total of 596 Constructors' Championship points, 236 clear of the team's nearest rival.

Accepting the award Adrian said: "I must admit that in August it all seemed quite tight – I don't know what happened afterward," Newey said of the run of wins that saw Sebastian equal Alberto Ascari's record of consecutive victories. "We made the second half of the year slightly boring, but go back to the start of the year, and it's been a magic time."

Vettel quizzed Todt over doughnut rules
Sebastian Vettel has revealed that he spoke to FIA president Jean Todt to clear up why he was punished for performing donuts after the Indian Grand Prix.

The German was handed a reprimand, and his Red Bull team fined â‚¬25,000, after Vettel thrilled the crowds with a series of donuts on the start-finish straight in India immediately after clinching his fourth Formula 1 title.

Unhappy at the punishment, Vettel decided to take the matter up with Todt – who made it clear that the fine was for not returning to parc ferme rather than performing the donuts.

Todt clarified that as long as Vettel made sure to get his car back to parc ferme in the future he would not be punished for such exuberant displays again.

"Obviously the breach in the rule was not for doing the donuts; it was for not bringing the car back to parc ferme," said Vettel.

"It is a stupid rule, but the races after we had reason to do more donuts and every time I brought the car back, so no fine."

Vettel said that his chat with Todt has clarified his understanding of what he is allowed to do, so in future he will have no qualms about more donut celebrations.

"There is a parc ferme rule, we didn't follow the rule and that is why it is clear," he said. "For the future, we know how to do it properly." Yahoo Eurosport