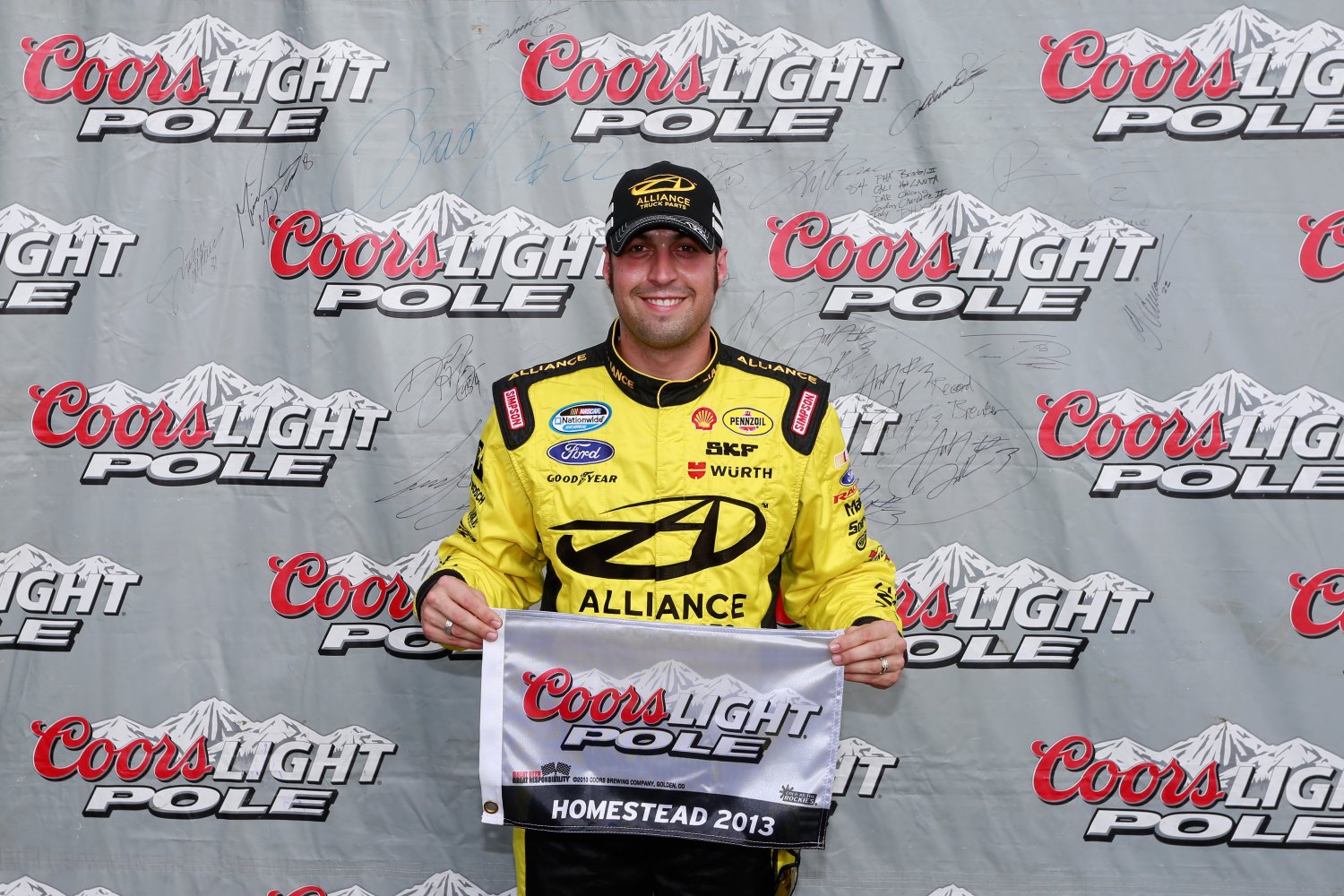 Sam Hornish Jr. crossed off every goal in IndyCar before leaving the series for NASCAR.

With three championships and an Indianapolis 500 victory, he felt there was nothing left for him to achieve.

Now, with one of the best seats in the series suddenly open, Hornish hasn’t changed his mind.

Hornish said Friday he has no interest in returning to IndyCar to replace Dario Franchitti at Target Chip Ganassi Racing. Hornish said the team reached out to his representatives this week when Franchitti was told by doctors he can no longer race because of the risk of injury is too great.

“I expressed I was very grateful even for the call," Hornish said. “A door opens and the reason still stands to not do it. It’s just any time I’ve had a thought or thought about that at all, it’s been like very minimal."

The No. 10 is one of the best seats in IndyCar, and Franchitti won 12 races and three consecutive titles when he joined Ganassi in 2008 after a brief stint in NASCAR. Franchitti and Hornish practically crossed paths as Hornish made the full-time jump to NASCAR that same year.

He isn’t looking back, even though he heads into Saturday’s final Nationwide Series race of the season with no job lined up for 2014.

Could he change his mind?

“If I’m sitting at home for a while and I just got to go hop into a race car like, I’m beating myself up, I don’t know," he said. “I’ve said it a million times: I did everything over there that I wanted to do, and way more. The only goal I had when I started racing was to go to the Indianapolis 500. I look at that as a chapter in my life.

“I also have the responsibility to do the best I can to take care of my wife and kids. If I had a huge mortgage or amount of debt I had to pay off, I might think about it. But the situation I’m in financially, it allows me to be able to wait and try to make something work over here."

And that’s been Hornish’s goal since he made the switch with team owner Roger Penske.

It’s been a struggle from the start — he had eight top-10 finishes and led just 55 laps in three years — and he was out of a ride in 2011 when Penske ran out of sponsorship for his project. Hornish ran just 14 races, only one in the Sprint Cup Series, that entire year and desperately tried to get back into a race car.

His shot came when Penske began piecing together sponsorship packages. There was enough money for 20 Cup races in 2012 and a full Nationwide Series schedule, and another full Nationwide schedule this year.

It’s paid off as Hornish goes into the finale trailing Austin Dillon by eight points in the championship race.

Win or lose the title, he’s likely done driving for Penske. The team owner told Hornish he needs to be racing in the Cup Series and he doesn’t have a spot for his longtime driver.

The fact that Hornish has nothing lined up is shocking to three-time NASCAR champion Tony Stewart, also a former IndyCar champion.

“I was not a Sam fan when he was in the 77 (Cup car)," Stewart said. “I believe he has earned his right to be here. His program has changed. He has totally turned around. He deserves the right to be here in a competitive car." Washington Post

Sam Hornish Jr. did not just win an Indianapolis 500 in 2006, as historic a feat as that would be for any race driver in the world.

The storybook triumph propelled Hornish toward his third IndyCar crown in six years, and that championship remains the most recent in open-wheel racing for the famed Roger Penske empire.

The backgrounder is offered to refresh memories about the motor sports stage Hornish departed and the pinnacle he descended after the 2007 IndyCar season to shift his talents to NASCAR.

Stating the obvious, those talents didn’t travel well. Hornish and stock-car racing have not been a natural fit.

Austin Dillon, 23-year-old grandson of accomplished team owner Richard Childress, will attempt to preserve a tenuous eight-point lead over Hornish on Saturday and add a Nationwide title to his 2011 Camping World Trucks crown.

But being relevant in a title fight again has gratified Hornish, still only 34 in a sport in which drivers’ careers can extend into their 40s. He has never looked back with what-ifs or regrets.

“People ask me, ‘Don’t you wish you were still in Indy cars?’â€‰" Hornish said by telephone last week. “I can guarantee you that I wouldn’t still be racing right now if I had stayed in Indy cars.

“It was time to try something new. Something in my gut told me I needed to go out and extend myself, learn a little bit more about myself, try to challenge myself again.

“I can honestly say that [the switch to NASCAR] has prolonged my racing career," he added, no matter how three lean full-time seasons at the Sprint Cup level from 2008 through 2010 might have clouded perceptions of his driving skills. [Editor's Note: Hornish knows he is a complete wanker on road courses. Once IndyCar was moving from an all-oval series to mostly road courses, it was time for him to move to NASCAR]

In addition, Hornish ran 20 Sprint Cup races in Penske’s No.â€‰22 Ford as replacement for suspended A.J. Allmendinger in 2012. Again, he experienced limited success, though he did finish fourth in Nationwide points in his full-time ride.

But Penske hired 23-year-old Joey Logano to fill the No.â€‰22 seat full-time this year. Hornish, characteristically stoic and not one to get too high or too low no matter the circumstances, took that in stride.

“I was disappointed," Hornish admitted, “because I could see what that team was capable of." Logano drove to one victory and made the Chase for the Cup, though he’ is ranked a distant ninth. Added Hornish: “I felt I definitely could have been part of that, but I also knew we’d have a great opportunity over here."

Moonlighting Sprint Cup drivers ineligible for the Nationwide championship have typically dominated in victories, with Kyle Busch and Brad Keselowski combining for a remarkable 18 victories in 32 races.

But Hornish steered to his second career Nationwide win at Las Vegas in March, leading 114 of 200 laps and outdueling Busch to the checkered flag by 1.1 seconds. That staked him to a points lead that he has traded back and forth with Dillon and Regan Smith throughout an intensely competitive season.

Better representing the upgrade in Hornish’s performance than victories are 16 top-five finishes. At Phoenix last Sunday, he persisted for fifth place in an ill-handling car and lost only two points to Dillon.

“Eight points is a little bit more than I would like to have to overcome [at Homestead]," he said afterwards. “But from the time the race started [Sunday]until Lap 200, that’s better than what I thought it was going to be." It was a case of maximizing the result.

Even now, there’s uncertainty about his 2014 plans because Penske, who has rising star Ryan Blaney under contract for next year, has given Hornish the go-ahead to explore all options. If racing fortunes favor him at Homestead, he could become a champion with an overcast future. But he doesn’t look back.

“I’ve been very blessed to be in racing as long as I have and to accomplish the things that I have, regardless of what the next couple years hold," he said contemplatively.

He’s still driven, still hungry, still hopeful. But there’s more to life, he reminded. “I enjoy spending a lot of time with my wife [Crystal] and kids [Addison and Eliza], and sometimes racing gets in the way of that."

What might have happened had he stayed in Indy cars? Irrelevant, he insisted convincingly.

“I felt I had achieved everything I could ever have dreamed of, and more," he said of the open-wheel career that produced 19 victories in 110 starts and 28 more finishes of second or third.

Incidentally, three of those victories were achieved at Homestead. A fourth, this time in a stock car, would certainly enhance the championship prospects that have energized him. MiamiHerald.com