Sebastian Vettel led a Red Bull 1-2 in Friday afternoon practice for the USGP in Austin, Texas. Vettel finished 0.115s up on teammate Mark Webber. Nico Rosberg was third ahead of his McLaren teammate Lewis Hamilton. Heikki Kovalainen rounded out the top-5 for Lotus.

More importantly, Vettel turned a lap of 1m41.981s on medium tires that had 23 laps on them. This is bad news for the competition.

Mark Webber turned a 1m42.032s on 19-lap-old hard tires, whereas Lewis Hamilton could only muster a 1m45.064s with a clear track on medium tires that had completed 28 laps.

In other words, Mercedes may be out to lunch on worn tires.

Jenson Button has been hit with a grid penalty of three places for overtaking under red flags during Friday's opening free practice session at the Circuit of The Americas.

The McLaren driver, who finished the session in second position, completed a pass shortly after the action was halted amid problems with the medical helicopter, officially breaching Appendix H, Article 2.4.4.1 (b) (3) of the current sporting regulations.

Having assessed the relevant television footage, the stewarding panel – which this weekend includes former World Champion Nigel Mansell – dished out a grid drop. 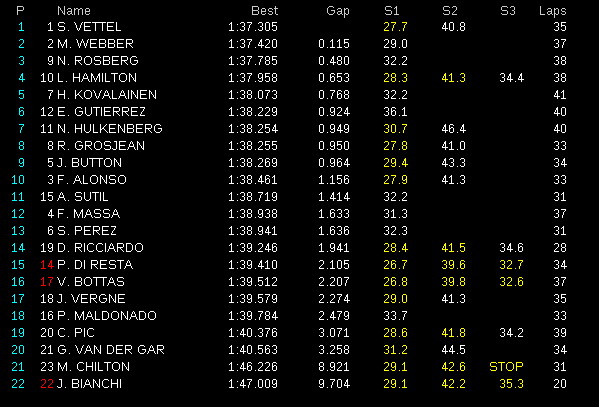