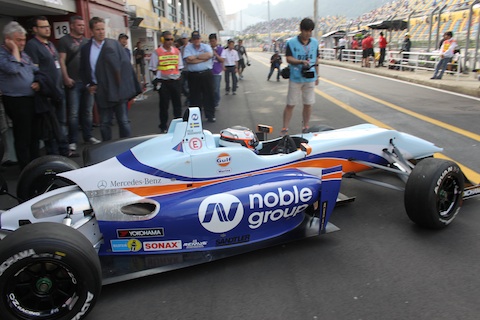 GR Asia with Mucke's Rosenqvist and Carlin’s da Costa staged an epic battle for provisional pole, which started when Rosenqvist went fastest right at the mid-point of the session with a 2m13.477s lap.

The time stood for close to 10 minutes, before da Costa showed exactly why he’s the event’s reigning winner by lowering the benchmark to an astoundingly quick 2m12.862s with five minutes left to run. Rosenqvist immediately responded, his next flying lap a 2m12.751s to re-take top spot.

The pair were set to go even faster again when a Yuichi Nakayama crash brought out the red flag with 90 seconds left on the clock, permanently halting the session and handing Rosenqvist provisional pole.

Alexander Sims was a late improver to finish third for ThreeBond with T-Sport, ahead of Harry Tincknell (Carlin) and Pipo Derani (Fortec), both of whom spent part of the first half of the session on top of the times.

Carlos Sainz Junior recovered from his practice crash to finish the session sixth for Carlin, while one of the morning’s pace-setters Stefano Coletti (EuroInternational) could manage just seventh.

The biggest surprise of the session was Alex Lynn, the Theodore Racing by Prema driver ending the session down in 26th after crashing at Fishermen’s Bend early on.