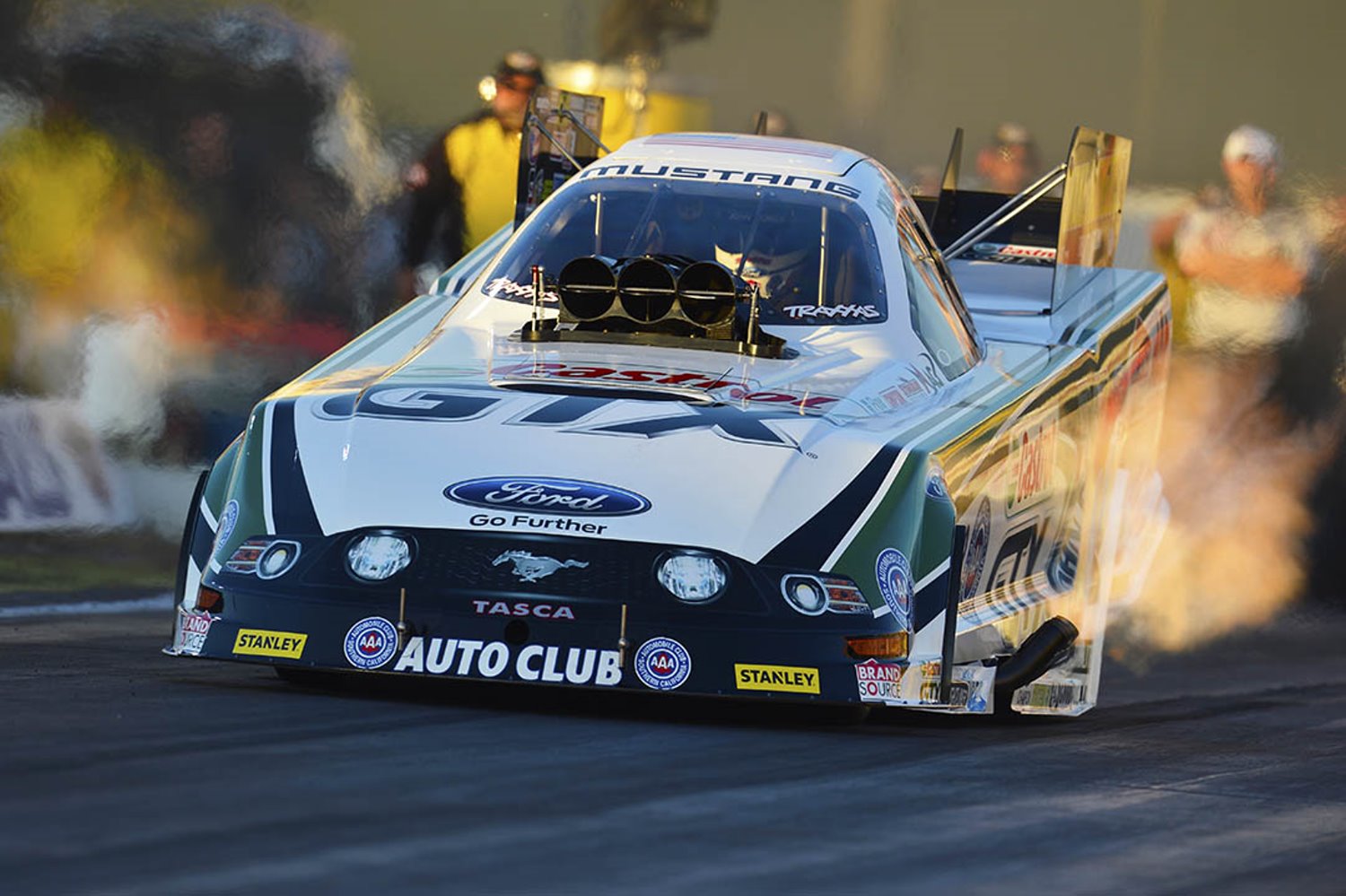 John Force and the Castrol GTX Ford Mustang continued to flex their muscles Friday, climbing to the top of the Funny Car performance ladder while just missing an Auto Club Raceway track record on the way to the provisional No. 1 qualifying position for Sunday’s 49th annual Auto Club Finals.

While the newly-crowned series champion was putting himself in position to start from the front for the third straight race, rookie Brittany Force was applying an exclamation point of her own by driving the Castrol EDGE Top Fuel dragster through the 1,000 foot timers in a personal best 3.787 seconds and 323.19 miles per hour.

It was the third personal best in the last seven races for the 27-year-old contender for the Auto Club’s 2013 Road to the Future Award that identifies the NHRA Rookie of the Year and it sends her into the final two Saturday qualifying sessions as the No. 4 qualifier..

"Coming out yesterday and running 3.84 with a cylinder out at about 200 feet, that was a pretty good number when you consider that," said the aspiring schoolteacher. "I felt pretty good about coming out here today. We were hoping to be able to improve – which we did.

"That was the quickest run of my career," she said. "I am so excited for my team and my guys to run that 3.78. I am so pumped and I can’t wait to get back to the track tomorrow."

For his part, Force was low key about a 4.015 that put him in position to claim the 146th No. 1 qualifying award of his 36-year NHRA career.

"We’re just trying to gobble up points to keep the competition from getting them," said the 138-time tour winner. We’d like to finish 1-2-3 (in points) and if everything goes right, I think we can do that."

Although he admitted that every conversation and every interview has been about his most recent championship, one he secured two weeks ago at Las Vegas, he said he’s focused on extending his current three-race winning streak.

"I’ve learned to turn off the switch and focus on what I’ve got to do," Force said.

"It starts with the sponsors," the 15-time Auto Racing All-American said of his most recent milestone. "When you have sponsors like Auto Club, Force, Castrol, Traxxas, BrandSource and Mac Tools, that lets you hire the right people.

"Then you rally those people together and you do your job as a driver and that’s what makes the ‘magic.’ It’s a team effort. The crew chief has to have the right attitude, the team has to make the right calls and the driver has to do his job, too."

Hight, who can still finish as high as second in points in the Auto Club Ford, was pleased with his Friday performance.

"We picked up two qualifying bonus points yesterday and one today," Hight said, “so that’s big; that’s moving us in the right direction. Going up there, (crew chief) Mike Neff said he thought we could run a 4.03, so we were two thousandths better than that. That shows you have a good handle on your race car.

"We need to be at the top here. We’re really trying to win this race for Auto Club and end this season on a high note. So far, so good. I give my team an A+."

Although it was a good day overall for JFR, it wasn’t without incident as Courtney Force’s special edition Traxxas Ford Mustang suffered a mechanical failure at the hit of the throttle Friday, backfired the supercharger and inflicted serious damage to the carbon fiber body.

"Our Traxxas team had a rough day at the office," said Force."The conditions were great; the track was cooling down because it was being shaded a little more. We definitely had our eyes set on a good run. We watched a couple of the cars ahead of us run in the low 4.0s.

"We went up there and banged the blower. It’s unfortunate and I’m bummed for my Traxxas crew. This is the last time we’ll be running the rookie car. It definitely hurt it on that run, but the good thing is everyone is OK. We’ll see if we can find and fix the problem and just get back after it tomorrow," said 2012's top rookie. "We’ll be running the pink car for the rest of the weekend and I’m excited for that."