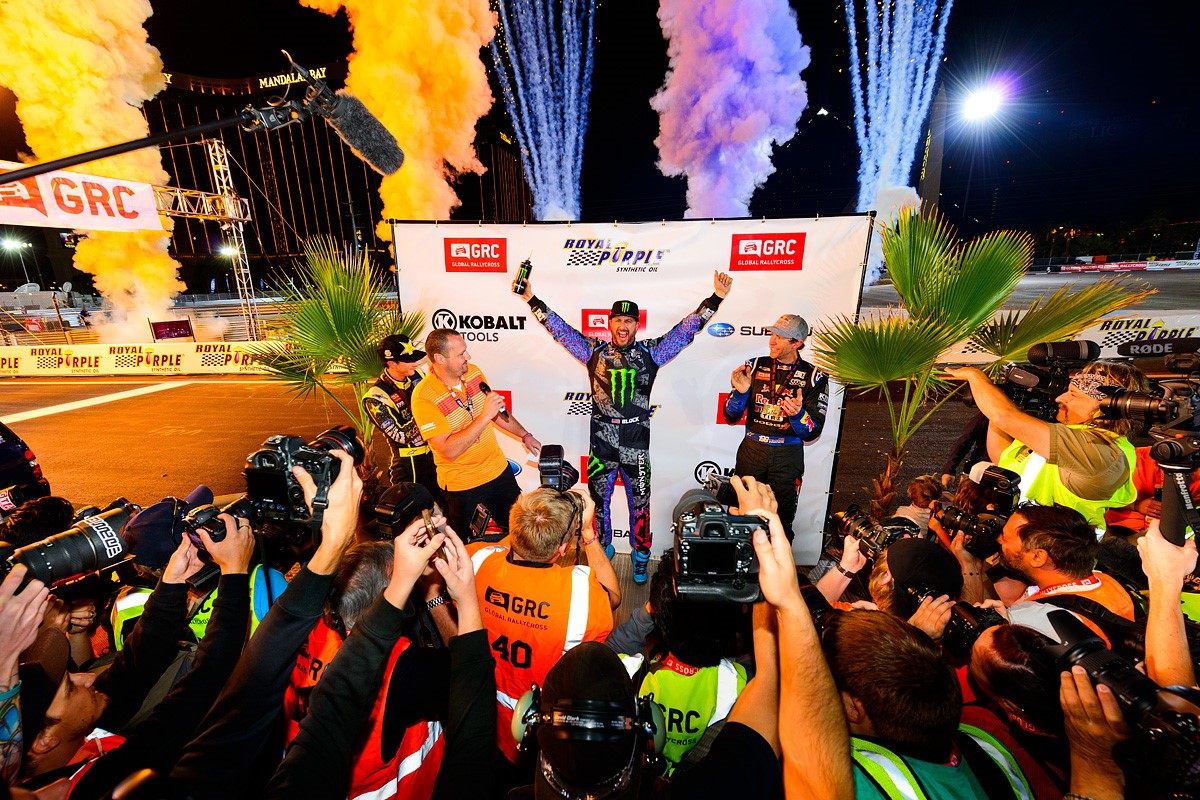 That’s the initial reaction from Ken Block after he took his Fiesta ST to a first career Global Rallycross Championship (GRC) win tonight in Las Vegas.

Block’s victory in Round 9 of the championship led Ford Fiesta to a 1-2 finish, with Tanner Foust second.

"I am absolutely stoked," said Block. "I’ve proven this year that I’ve got the speed and just had some back luck in the first corner so it’s nice to have some good luck and great battles tonight with Pastrana and Foust."

"I couldn’t be happier, especially for all my sponsors and my very, very hard working team," added Block.

The win also moved the Hoonigan Racing Division driver into third place in the championship standings.

"I think I finished third overall, which I am actually very happy about," said Block. "For all the sort of bad luck we’ve had, third overall is a good accomplishment. Wish we would have finished a little higher but I’ll take third here and second in the Rally America Championship and look to do better in both of those next year."

"Today was almost a perfect day," said Foust. "I was first in qualifying, won both my heats, had quick lap times, saved the tires, the car was working great, the team was working great, and then I jumped the start on the final race from the pole position.

"I thought I timed it just about right but video review says I did in fact jump the start and so I got a stop and go penalty for that," Foust added. "That took me out of smooth sailing to being right in the middle of a war. Travis (Pastrana) was coming off the curbs a couple times which let me pass him for second and then I was started to gain on Ken, I don’t know if he was backing off because he had such a big lead, but I hit some oil from (Patrik) Sandell and almost drove off the track, so that was the end of me chasing Ken.

"I’m really happy with second place in the championship," said Foust, who won back-to-back GRC championships in 2011-2012. "The pressure was really off from the start of the race since Brian Deegan had a crash in the LCQ but I’ve won twice in Vegas so I would have liked to have taken the hat-trick. I’m still stoked to have ended up in second and very happy for Topi’s (Heikkinen) championship."

"The race was alright," said Heikkinen. "I was fourth in seeding, the track was working for me and even on the heats the speed was there."

"On the final I had the fourth pole position which meant I was on the outside of the grid and made it difficult for me entering the first corner," added Heikkinen. "I was side-by-side with Travis Pastrana and the battle put him into the wall and gave me a black flag. I did a stop-and-go, ended up back against Pastrana and he overtook me at the finish."

The driver of the Bluebeam OlsbersMSE Fiesta ST driver finished fourth overall at the final round in Las Vegas, which marked the first podium without Heikkinen.

"The season overall was really great for us," said Heikkinen. "We won five races in a row, had eight podiums and everything just seemed to be in place. I am very grateful to have sponsors that supported me throughout the year and glad to have gotten them the championship. I hope to be back next year to do it all over again."