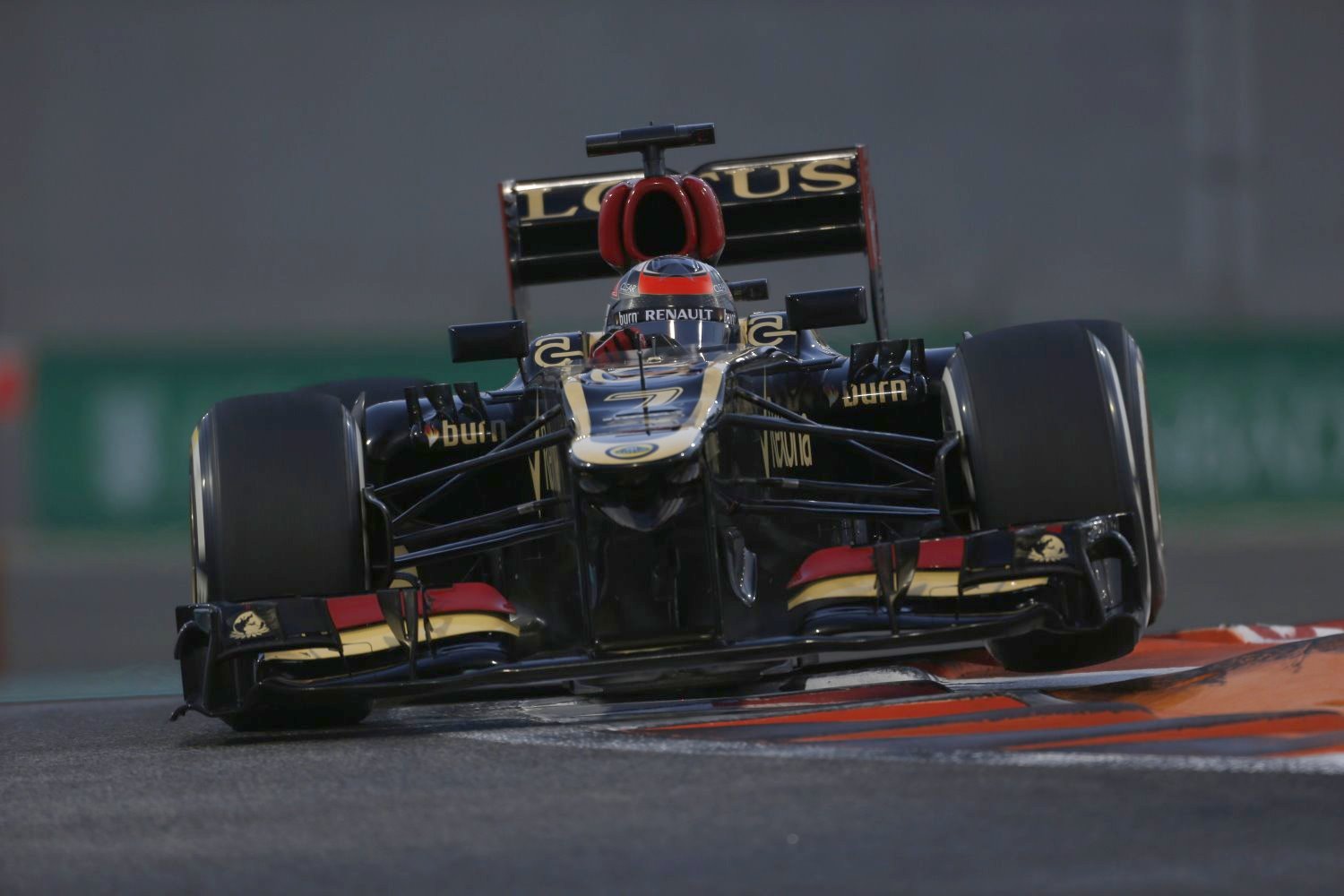 Unpaid Raikkonen threatens to boycott Lotus
(GMM) Eric Boullier has confirmed that Lotus is still behind in its payments to Kimi Raikkonen.

The Finnish driver, who sat out Thursday's proceedings in Abu Dhabi, revealed when he finally arrived in the Persian Gulf that he almost didn't make the trip from Switzerland, and he could sit out the last two races of 2013.

"For sure (I could)," the 2007 world champion, who is returning to Ferrari in 2014, answered when asked about not racing in Austin and Brazil.

"I enjoy racing, I enjoy driving — but a big part of it is business. Sometimes when that is not dealt with like it should, we end up in an unfortunate situation."

The current impasse was clearly triggered by the recent Indian grand prix, when Lotus engineer Alan Permane swore angrily at Raikkonen on the radio.

"It's not very nice when you hear that you don't have the interests of the team at heart and you've been paid zero euros the whole year," said the 34-year-old.

"You have to draw the line somewhere and if it goes over it's not really my fault," added Raikkonen.

The Frenchman said he didn't want to comment on Raikkonen's absence on Thursday.

"Because I don't want to put fuel on the fire," said Boullier.

If the fire burns out of control, Raikkonen might not be at the wheel of the black and gold car in Austin and Brazil.

Asked about his driver's boycott threat, Boullier answered: "I can't answer some of your questions.

"(Team owner) Gerard Lopez is in negotiations with Kimi."

The tension at Lotus is undoubtedly related to the protracted finalization of a 35 per cent sale of the team to the 'Quantum' investment group.

"The deadline is approaching," Boullier said, "and if it doesn't happen then we will have to consider other solutions in the interest of preserving the team.

"I don't want to be forced to make massive layoffs," he added.

The seriousness of Lotus' financial situation also explains why the team is considering signing Pastor Maldonado, with millions in PDVSA backing, rather than the highly rated Nico Hulkenberg for 2014.

Boullier said the obvious priority is to conclude the Quantum deal.

"We did a triple audit and there is no financial problem with them," he insisted. "But now it becomes extremely difficult to move money around the world."

Not only that, Lotus now has Raikkonen's strike threat to handle.

"Sure, Kimi has emotions too," Boullier told Finland's Turun Sanomat newspaper. "He's not a cold-hearted man, he's a normal person."

No more Fridays for Kovalainen in 2013
(GMM) Friday in Abu Dhabi was Heikki Kovalainen's last appearance at the wheel of a Caterham in 2013.

Finland's Turun Sanomat newspaper reports that the Finn, who has made several practice appearances for the green team this season, will defer to the race drivers for the final two grands prix in Austin and Brazil.

Caterham has admitted it has missed Kovalainen's experienced input this year; a factor that will be all-important for dealing with the radical new regulations for 2014.

"But more important than anything I think is (to have in the car) someone who is capable of being almost transparent and providing the most accurate feedback as possible," he added.

Kobayashi photographed smoking cigarette
(GMM) Kamui Kobayashi has dealt his bid to return to formula one a blow, after photos emerged of the former Toyota and Sauber driver smoking a cigarette.

Walking next to an unnamed Japanese beauty, Kobayashi – who has been racing for Ferrari in GT sports cars this year – was depicted smoking in the photos published by the popular Japanese gossip magazine 'Friday'.

Additionally, the young woman walking alongside Kobayashi is reportedly not his girlfriend.

A photo can be seen here.

According to 2013 research, almost 34 per cent of all Japanese men smoke.

However, the Enstone based team is running out of time as it waits for the deal to be completed, and has set a mid-November deadline, the German trade magazine said.

If the deadline passes, Lotus will surely resort to signing Pastor Maldonado, whose PDVSA backing is estimated at up to a staggering EUR 41 million per year.

An insider is quoted as saying: "When will Pastor realize that everyone is only after his money, not him?"

Until Lotus gets its hands either on Venezuela's or Quantum's money, team owner Gerard Lopez is reportedly dipping into his own pocket.

"The budget will not be touched (reduced)," he is quoted as saying. "We want to finish second in the championship."

Lotus is currently fourth, but the difference between finishing behind Ferrari and Mercedes or ahead of them is reportedly EUR 15 million in Concorde Agreement cash.

Team boss Eric Boullier was asked if the sport has taken a worryingly bad turn if competitive teams cannot afford to sign someone as talented as the German.

Team owner Lopez, however, said: "With Grosjean and Hulkenberg, we would have the best driver pairing for the future."

Quadruple world champion Alain Prost has joined those who think it is ridiculous that F1's financial situation could lock the promising Hulkenberg out of the grid.

"You would like to see him have five offers on the table and he can choose the best one for him," said the Frenchman in Abu Dhabi.

"30 years ago," Prost told the German newspaper Welt, "a guy like Hulkenberg would have been snapped up by a top team."

Not even a week after the German notched up his fourth consecutive drivers' title in India, he has travelled to the Persian Gulf with a special helmet livery to wear in celebration.

But surely the gold leaf made the helmet much more expensive than usual for Vettel, who has reportedly been paid a EUR 5 million bonus by Red Bull for winning the title?

"No, it costs EUR 5000, with or without the gold," said Peter Burger, of Vettel's helmet manufacturer, Arai.

Pirelli's 2014 tire deal 'done' – Hembery
(GMM) Pirelli's threat to quit formula one at the eleventh hour prior to the 2014 season has receded.

A week ago in India, the boss of F1's controversial official supplier, Paul Hembery, said Pirelli must be allowed to do more testing ahead of the next world championship.

"Based on the comments of our chairman (Marco Tronchetti Provera) a few weeks ago," he said, "there has to be some (more) running or we can't do the tires."

In the days since then, there seems to have been some movement beyond the teams' recent reluctance to help Pirelli with its 2014 preparations.

Together with McLaren, Pirelli is set to test over 1000 kilometers at Vallelunga in Italy, and some tire testing at Interlagos will also take place later this month.

"We will be bringing a couple of sets of tires of the prototype for next season to the Brazil race," Hembery said, "for P1 (first Friday practice).

"We're hoping to do a couple of tests in December and January with an old-generation car and there's been some good ideas going forward as to what we could do during the pre-season itself," he added.

The Italian company has already signed deals for 2014 and beyond with the teams and Bernie Ecclestone, and the FIA has given the green light for a new contract.

Asked to comment on the current status of Pirelli's F1 deal for 2014, Hembery said in Abu Dhabi: "It's done really.

"There's one last piece to be done with the FIA. The lawyers are dealing with that — when you get lawyers involved with anything it tends to add time to whatever you're doing. So it's just rumbling along," he added.