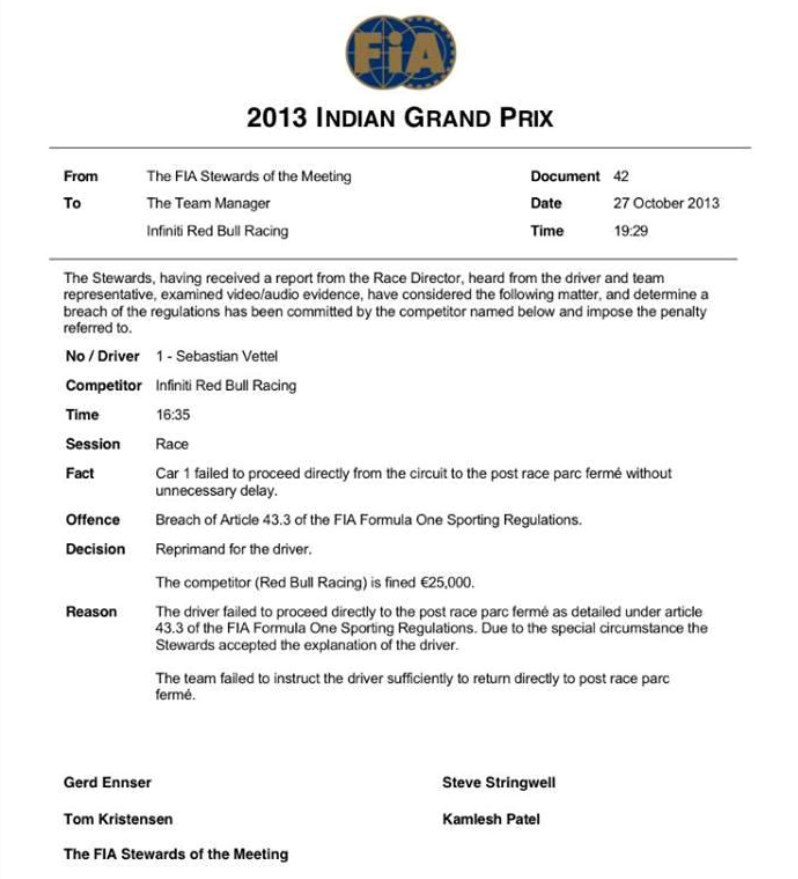 Sebastian Vettel got off with a reprimand but Red Bull were slapped with a 25,000 euros ($36,000) fine over the German's rubber-burning 'doughnuts' after sealing the world title in India.

Vettel defied the officials and span round and round in his car in front of the packed grandstand, raising a plume of smoke, after winning the race and his fourth straight championship.

He then climbed on top of his Red Bull and saluted the crowd before kneeling down in front of his car in mock worship, raising a huge roar from the spectators.

10/27/13 We guess that is the most expensive box of donuts Vettel ever bought but we suspect it was worth ever ridiculous cents. To the right is the official letter of the FIA regarding Vettel's donuts. To ridiculous for words …

(GMM) Sebastian Vettel spent some of his first moments as a quadruple world champion-elect in the stewards office after Sunday's Indian grand prix.

After wrapping up his 2013 title campaign in style with a third consecutive win at the Buddh circuit, the German let his emotion spill over with a series of perfect donuts on the front straight.

"(Engineer) Rocky called for the usual procedure, but I said 'not this time'," Vettel grinned as he recalled doing the donuts, stopping the car on the grid and throwing his gloves into the grandstand.

The Red Bull driver, however, broke a fundamental rule about taking his car straight to 'parc ferme' — a crucial procedure to prevent interference with the car and strict compliance with the rules.

Indeed, FIA officials were quickly on the scene of the abandoned RB9 to 'neutralize' it, and Vettel and team manager Jonathan Wheatley were summarily called up by the stewards.

Dr Helmut Marko, however, said he could not understand the officials' strict adherence to the rules in such a universally-enjoyed moment of emotion and celebration, calling the FIA's reaction "unbelievable" and "strange".

German commentator Marc Surer said: "The FIA could penalize him, but I hope they turn a blind eye, because this was not just any race but the title decider.

"On the other hand, the FIA constantly surprises me with the penalties they issue."

Meanwhile, Lotus' relationship with the departing Kimi Raikkonen may have imploded in India on Sunday, as the Finn clashed on track with his charging teammate Romain Grosjean.

And there was a colorful exchange on the radio in the heat of the battle, with one team member saying on the radio: "Kimi, get out of the f***ing way".

NBC pit reporter Will Buxton said afterwards on Twitter: "Tell you what I'd do. I'd stick Davide Valsecchi in the car for the final three (races). Just for fun."