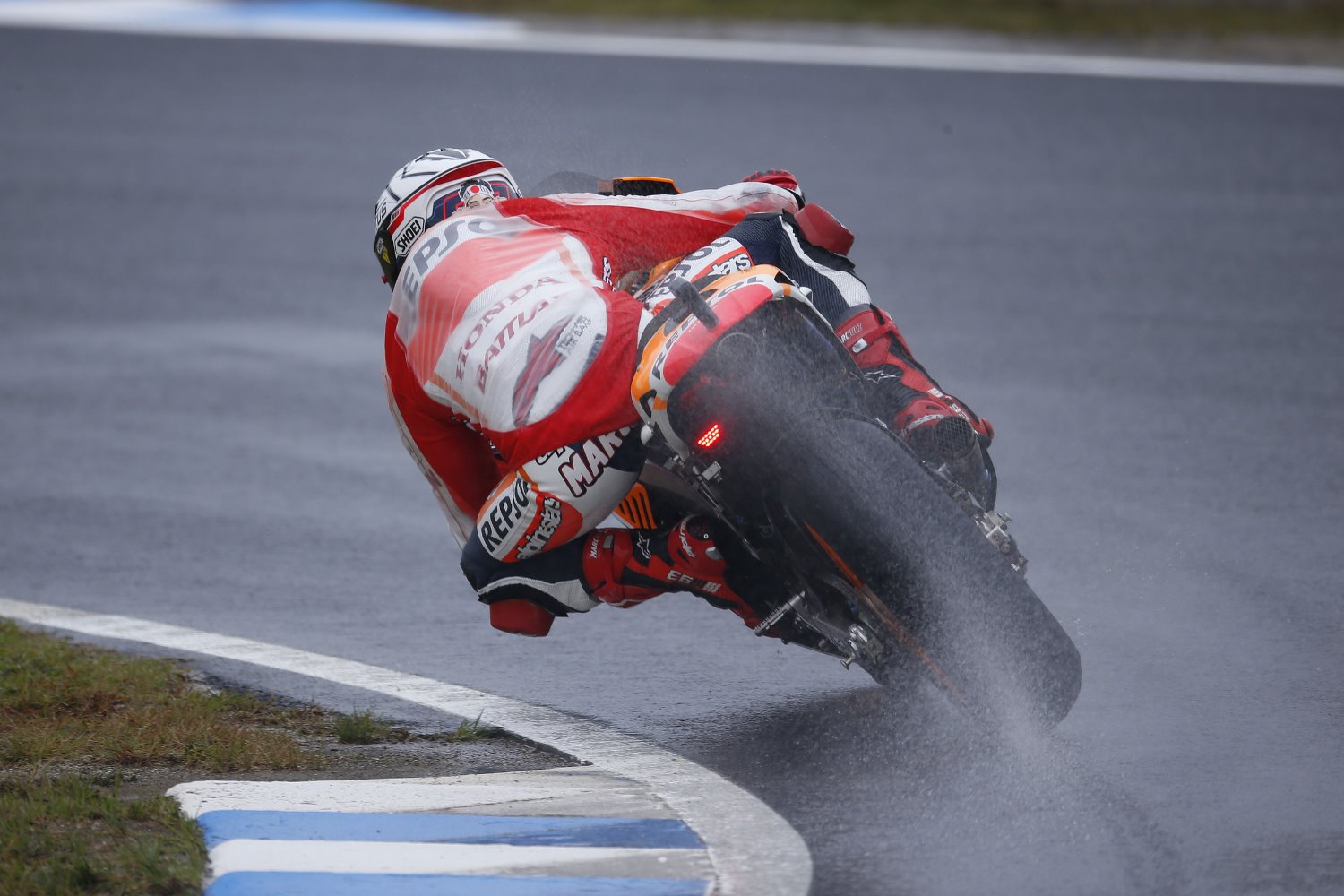 After yesterday was completely cancelled, due to visibility problems grounding the medical helicopters, weather in Motegi had not improved by this morning. The sessions were once again cancelled, this time due to track conditions, and the entire paddock was forced to wait patiently.

Finally at 12h50 race direction deemed the track safe and the Moto3 class took to the Japanese circuit. Conditions slowly improved, although there was still a lot of standing water on track when the MotoGP class session began at 13h55. Race direction declared this session as an extended qualifying session with a time allowance of 75 minutes.

Following Friday’s cancellation of practice sessions due to weather conditions at the AirAsia Grand Prix of Japan, the premier class riders were given a special 75-minute qualifying heat on Saturday afternoon.

Defending World Champion Lorenzo made full use of the extended session, getting straight out onto the wet circuit to start working on his race set up. Having initially swapped top spot with rival Marc Marquez early in the session he then dropped down the timesheets.

After some work on set-up he was back, rising quickly to second after a third of the time had gone, 0.1s from Marquez on top. The P1 position continued to change hands until with 15 minutes to go, when Lorenzo put the hammer down and delivered a perfect 1’53.965 lap to go over half a second clear.

Whilst his rivals were able to improve, so was he, dropping even further to a 1’53.471 in the final seconds to secure pole 0.65s ahead of Marquez.

“I’m really happy," reflected Lorenzo. “It was not so simple because my last memory of the rain was Assen. At the beginning I was a little bit scared and didn't want to crash. We were lucky to have the extended qualifying time to get used to the track. Little by little I got confidence and finally I felt really good with the bike and the grip of the track, especially under braking. It doesn't matter if it’s wet or dry tomorrow, it’s not my problem to think about it, I have to ride in whatever conditions we have. A wet race would be better for the championship though!"

His teammate Valentino Rossi was also looking comfortable around the Motegi circuit. The nine-time World Champion was one of the few who climbed to the top of the timesheets early in the session with a 1’59.304. He continued to be a key protagonist, regularly swapping positions in the top four places with his rivals.

With 30 minutes remaining Rossi had taken provisional second on the grid, just 0.12s from Pedrosa on pole. The last minutes as usual saw a flurry of activity as his teammate took a stunning pole position. Rossi eventually took fifth place at the end of the session with a 1’54.732 second lap.

The Italian later stated, “The result is not so bad, I hoped to arrive on the front row, I’m not so far but I am behind. I was in a better shape when it was full wet and felt better with the bike. When there was less water on the track and some places were quite dry I was able to improve my time a little but not enough for the front row. Tomorrow will be a surprise because if it is dry we will have to make the best set up in the morning warm up and try to arrive competitively for the race."