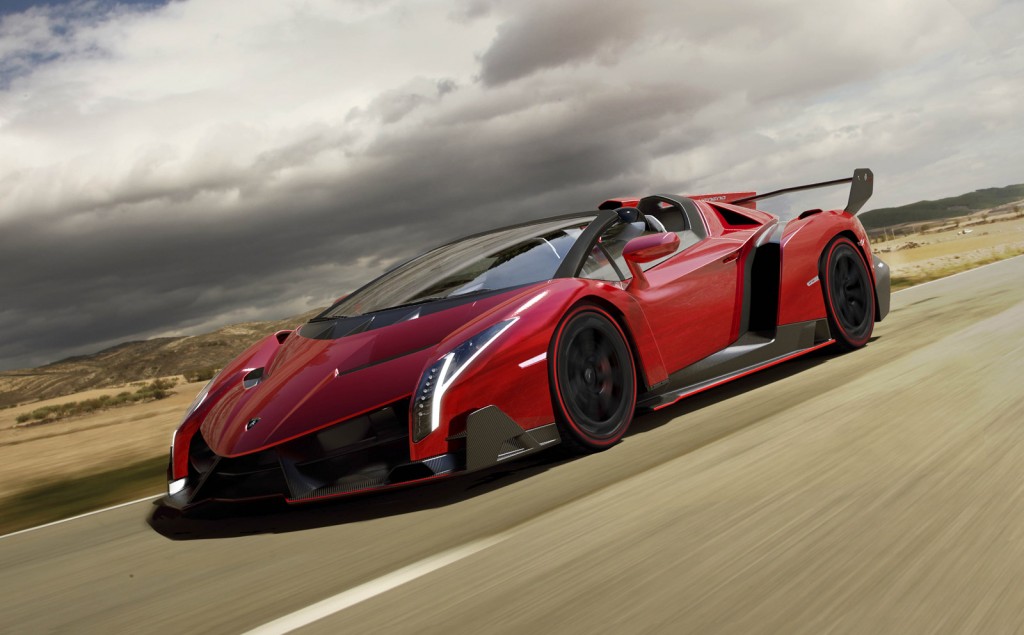 The first images and details for Lamborghini’s new Veneno Roadster have hit the web. The car is the convertible version of the Veneno coupe first shown at the 2013 Geneva Motor show, which was limited to just four examples in total. But unlike the coupe, Lamborghini is planning as many as nine Veneno Roadsters, each priced at a cool 3.3 million euros (approximately $4.5 million).

News of the Veneno Roadster first broke as early as July and the car was confirmed by Lamborghini CEO Stephan Winkelmann just one month later. Now we have the details on the open-top version of a car originally built to celebrate Lamborghini’s 50th anniversary, showcase the potential of the automaker’s design team and explore new avenues in lightweight construction.

Apart from the roofless design, the Veneno Roadster is virtually identical to the coupe, much in the same way that the Aventador, with which the Veneno shares its underpinnings, is much the same as the Aventador Roadster. Power comes from Lamborghini’s familiar 6.5-liter V-12, which in Veneno spec has been tuned to deliver 740 horsepower.

This edge over the Aventador’s 691-horsepower rating means the Veneno is Lamborghini’s fastest and most powerful road car to date. Lamborghini claims the Veneno Roadster will accelerate to 62 mph from rest in 2.9 seconds and reach a top speed of 220.5 mph, the same as the coupe.

The lighter weight of the car is thanks mostly to its carbon fiber construction. In this department, Lamborghini is showcasing its unique forged carbon production method where short pieces of carbon thread are mixed with resin, placed into a heated mold and then cured under high pressure. The new process can produce a part in as little as three minutes, greatly reducing the manufacturing time compared to traditional carbon fiber components. The Veneno Roadsters brakes also benefits from carbon ceramic discs.

Oh, in case you were wondering, that color is a new hue dubbed Rosso Veneno. It’s exclusive to the Veneno but we can see it being offered on other models further down the track.