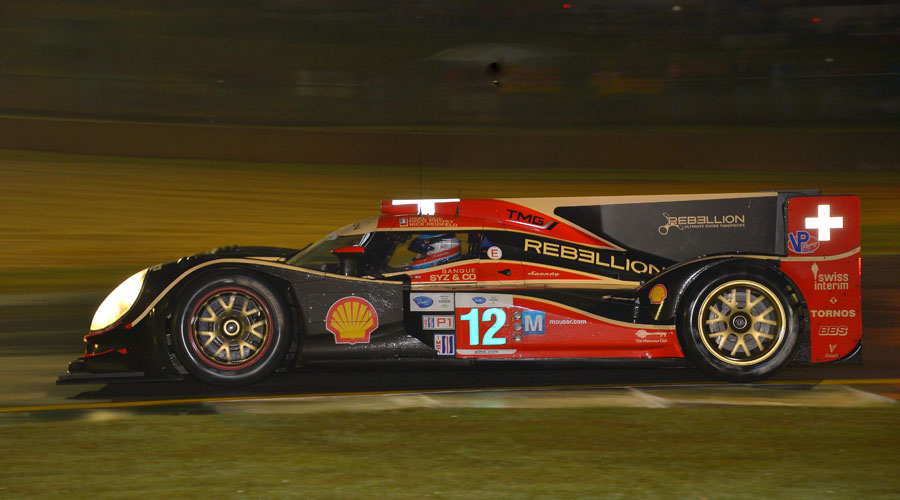 Rebellion Racing waited until dark to set the fastest lap of the opening day of practice for Saturday’s 16th Petit Le Mans Powered by Mazda at Road Atlanta. Neel Jani led the session with a lap of 1:20.360 (113.788 mph) in the No. 12 Rebellion Timepieces/Lemo Connectors/Speedy Garage Lola B12/60-Toyota shared by Nico Prost and Nick Heidfeld.

Running on a damp but drying track, Jani’s time was the fastest of Thursday’s three sessions, with both the morning and afternoon practice run in the rain. A fourth one-hour practice will be held Friday beginning at 10:20 a.m., with qualifying at 1:45 p.m.

“I’ve never driven in the rain at night, so this was a premier for me," Jani said. “It was not at all easy with the spray and puddles, but I got a feel for it. We were far off from risking anything. It’s only Thursday, but if it was Saturday, it’s a different story. We have seen many times where we were very quick compared to the Muscle Milk team, but they have a very good racecraft that we are not underestimating."

Muscle Milk Pickett Racing led both of the daytime sessions, with Klaus Graf turning a lap of 1:22.875 (110.335 mph) to run second in the evening session in the No. 6 HPD ARX-03c shared by Lucas Luhr and Romain Dumas.

“We have a good car, and it’s very comfortable to drive," Henzler said. “The Falken rain tires are very good. Tomorrow when the track is dry we will have different conditions, and we have no idea of what it will be like for the race on Saturday."